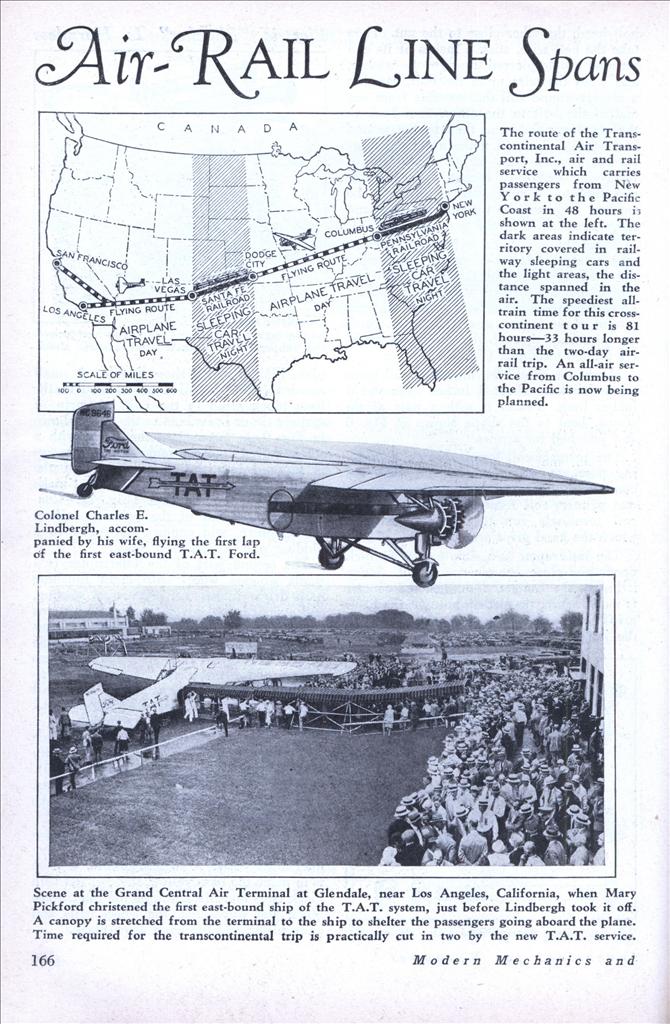 RECENT inauguration of regular 48-hour New York to Los Angeles or San Francisco air-rail service by the Transcontinental Air Transport, Inc., in which the Pennsylvania railroad is financially interested, is interpreted as the outstanding commercial aviation development of 1929 in the United States.

The 48-hour trip by air-rail across the continent is compared to the 81-hour trip by fastest all-rail routes. And scarcely had the T.A.T. been launched than plans were under way for reducing the time. The T.A.T. is expecting to offer a supplementary service which will be all air from Columbus to the Pacific Coast.

Patrons of the T.A.T. can now board the “American,” a de luxe limited train of the Pennsylvania railroad, in New York in the early evening, spending the night in a sleeping car. In the morning they are transferred to a waiting airplane in Columbus, Ohio, and a daylight flight is made to Dodge City, Kansas. Stops are planned en route at Indianapolis, St. Louis, Kansas City and Wichita. After dinner at Dodge City an Atchison, Topeka & Santa Fe trail takes the passengers on another night journey in a sleeper. At Las Vegas, N. M., the final lap by air either to Los Angeles or San Francisco, arriving late that afternoon.

Efficient terminals have been established along the route, motor-car tenders effect the transfers from trains to airplanes. The ships are the tri-motored Wasp-powered Fords. And these ships are piloted by a corps of 34 pilots. The first pilots secured for the corps all had at least 3,000 hours in the air with at least 500 hours on tri-motored planes, and relief pilots had nearly as good records. The service is expected to prove valuable to business men and others to whom time is money.