For a couple of years after this article was written, the Navy was still ordering subsonic fighter planes to launch off of carriers.  This is because the then state of the art jet engine technology required takeoff rolls too long for an aircraft carrier. This is what led the Navy to consider a supersonic seaplane like the Convair Sea Dart. 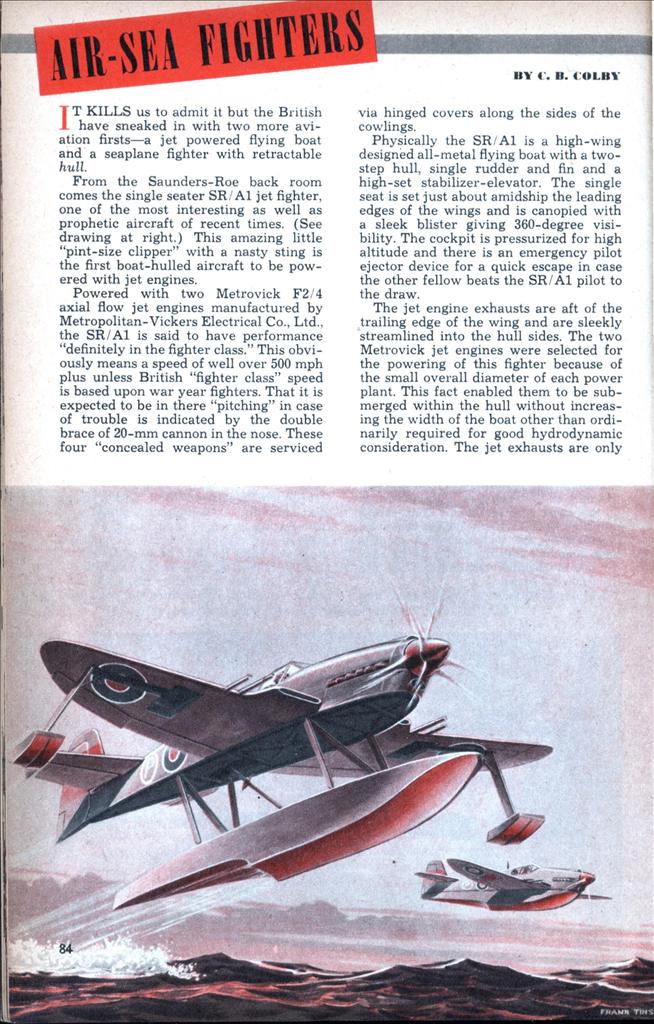 IT KILLS us to admit it but the British have sneaked in with two more aviation firsts—a jet powered flying boat and a seaplane fighter with retractable hull.

From the Saunders-Roe back room comes the single seater SR/A1 jet fighter, one of the most interesting as well as prophetic aircraft of recent times. (See drawing at right.) This amazing little “pint-size clipper” with a nasty sting is the first boat-hulled aircraft to be powered with jet engines.

Powered with two Metrovick F2/4 axial flow jet engines manufactured by Metropolitan-Vickers Electrical Co., Ltd., the SR/A1 is said to have performance “definitely in the fighter class.” This obviously means a speed of well over 500 mph plus unless British “fighter class” speed is based upon war year fighters. That it is expected to be in there “pitching” in case of trouble is indicated by the double brace of 20-mm cannon in the nose. These four “concealed weapons” are serviced via hinged covers along the sides of the cowlings.

Physically the SR/A1 is a high-wing designed all-metal flying boat with a two-step hull, single rudder and fin and a high-set stabilizer-elevator. The single seat is set just about amidship the leading edges of the wings and is canopied with a sleek blister giving 360-degree visibility. The cockpit is pressurized for high altitude and there is an emergency pilot ejector device for a quick escape in case the other fellow beats the SR/A1 pilot to the draw.

The jet engine exhausts are aft of the trailing edge of the wing and are sleekly streamlined into the hull sides. The two Metrovick jet engines were selected for the powering of this fighter because of the small overall diameter of each power plant. This fact enabled them to be submerged within the hull without increasing the width of the boat other than ordinarily required for good hydrodynamic consideration. The jet exhausts are only slightly wider than the actual width of the hull itself at the point where they emerge and thus it is barely nine feet between the “pipes.” This gives a very small yaw moment when one engine is stopped in flight—a yaw that may be promptly corrected with the rudder, and that correction so slight that it produces no drag from the tail.

With the engines submerged within the hull the wing may be designed for high speed without having to compromise with engine nacelles or intakes. The highspeed section of the wing has a single spar and an aspect ratio of 5:1 while the taper ratio is 2:1, giving the leading edge a decided sweepback.

The two-step hull breaks the smooth over-all lines, but the steps, designed by Arthur Gouge (who designed the Saro automatic mooring device also incorporated in the SR/A1) are of a low-drag form. The front step is of a “V” design in plan form and the aft step is a vertical knife edge. The over-all length of the SR/A1 is 50 feet while the span is 46 feet. The height is 17 feet and the hull beam width is just under seven feet. The wing area is approximately 415 square feet.

The other British first is the N.2/42, a highly original answer to the problem of designing a low drag, reciprocating engine, seaplane fighter. (See drawing at left.) This problem has always been a tough one to crack. A pusher propeller abaft the pontoon won’t work because during take-off, the seaplane’s tail hunkers down into a flurry of spray and wake that would half bury the blades. On the other hand, to get necessary clearance for a tractor-type prop above the float, the fuselage must be hiked high on tall, stiltlike legs. That’s all right for taking off and landing, but in combat flight, the added drag of even the most highly streamlined pontoon and pylon arrangement pulls the seaplane’s performance far below that of wheeled fighters.

The British solution of the puzzle is to have the ship take off, then retract the main pontoon up against the bottom of a comparatively shallow fuselage. At the same time, the wing-tip floats swing upward into the wing and presto—we have a remarkably clean, sea-going fighter!