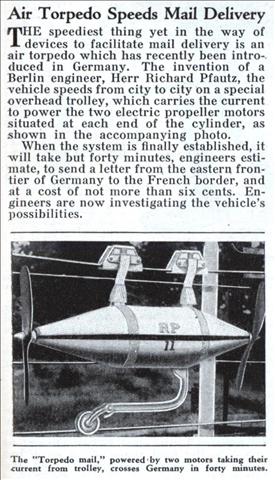 THE speediest thing yet in the way of devices to facilitate mail delivery is an air torpedo which has recently been introduced in Germany. The invention of a Berlin engineer, Herr Richard Pfautz, the vehicle speeds from city to city on a special overhead trolley, which carries the current to power the two electric propeller motors situated at each end of the cylinder, as shown in the accompanying photo.

When the system is finally established, it will take but forty minutes, engineers estimate, to send a letter from the eastern frontier of Germany to the French border, and at a cost of not more than six cents. Engineers are now investigating the vehicle’s possibilities.