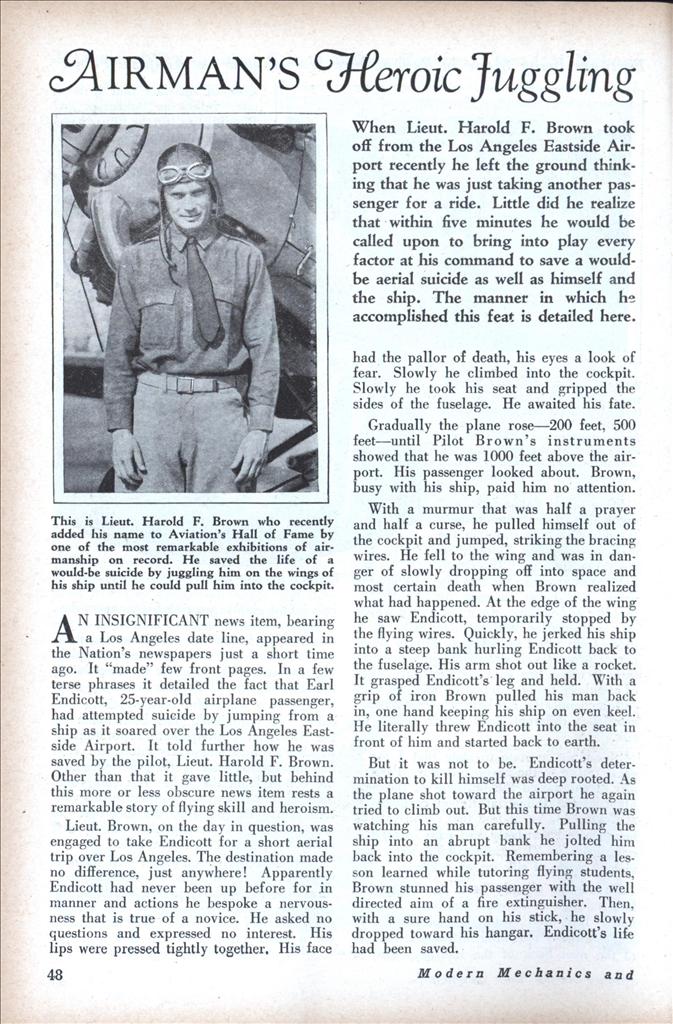 When Lieut. Harold F. Brown took off from the Los Angeles Eastside Airport recently he left the ground thinking that he was just taking another passenger for a ride. Little did he realize that within five minutes he would be called upon to bring into play every factor at his command to save a would-be aerial suicide as well as himself and the ship. The manner in which he accomplished this feat is detailed here.

AN INSIGNIFICANT news item, bearing a Los Angeles date line, appeared in the Nation’s newspapers just a short time ago. It “made” few front pages. In a few terse phrases it detailed the fact that Earl Endicott, 25-year-old airplane passenger, had attempted suicide by jumping from a ship as it soared over the Los Angeles East-side Airport. It told further how he was saved by the pilot, Lieut. Harold F. Brown. Other than that it gave little, but behind this more or less obscure news item rests a remarkable story of flying skill and heroism.

Lieut. Brown, on the day in question, was engaged to take Endicott for a short aerial trip over Los Angeles. The destination made no difference, just anywhere! Apparently Endicott had never been up before for in manner and actions he bespoke a nervousness that is true of a novice. He asked no questions and expressed no interest. His lips were pressed tightly together. His face had the pallor of death, his eyes a look of fear. Slowly he climbed into the cockpit. Slowly he took his seat and gripped the sides of the fuselage. He awaited his fate.

Gradually the plane rose—200 feet, 500 feet—until Pilot Brown’s instruments showed that he was 1000 feet above the airport. His passenger looked about. Brown, busy with his ship, paid him no attention.

With a murmur that was half a prayer and half a curse, he pulled himself out of the cockpit and jumped, striking the bracing wires. He fell to the wing and was in danger of slowly dropping off into space and most certain death when Brown realized what had happened. At the edge of the wing he saw Endicott, temporarily stopped by the flying wires. Quickly, he jerked his ship into a steep bank hurling Endicott back to the fuselage. His arm shot out like a rocket. It grasped Endicott’s leg and held. With a grip of iron Brown pulled his man back in, one hand keeping his ship on even keel. He literally threw Endicott into the seat in front of him and started back to earth.

But it was not to be. Endicott’s determination to kill himself was deep rooted. As the plane shot toward the airport he again tried to climb out. But this time Brown was watching his man carefully. Pulling the ship into an abrupt bank he jolted him back into the cockpit. Remembering a lesson learned while tutoring flying students, Brown stunned his passenger with the well directed aim of a fire extinguisher. Then, with a sure hand on his stick, he slowly dropped toward his hangar. Endicott’s life had been saved.