This is one of those incredibly bad ideas that everyone seemed to have at the same time. Maybe it had to do with the coincidence of a fad for aviation and one for skyscrapers. Whatever the reason, they never really address the catastrophic consequences of a crash, nor the problems of traffic management. 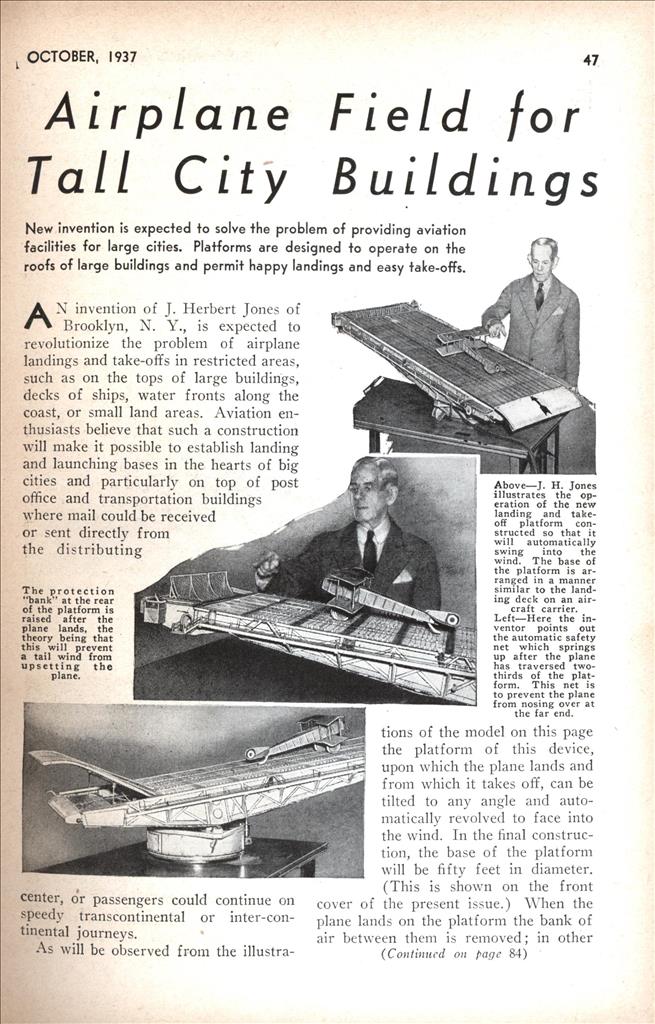 New invention is expected to solve the problem of providing aviation facilities for large cities. Platforms are designed to operate on the roofs of large buildings and permit happy landings and easy take-offs.

AN invention of J. Herbert Jones of Brooklyn, N.Y., is expected to revolutionize the problem of airplane landings and take-offs in restricted areas, such as on the tops of large buildings, decks of ships, water fronts along the coast, or small land areas. Aviation enthusiasts believe that such a construction will make it possible to establish landing and launching bases in the hearts of big cities and particularly on top of post office and transportation buildings where mail could be received or sent directly from the distributing center, or passengers could continue on speedy transcontinental or inter-continental journeys.

As will be observed from the illustrations of the model on this page the platform of this device, upon which the plane lands and from which it takes off, can be tilted to any angle and automatically revolved to face into the wind. In the final construction, the base of the platform will be fifty feet in diameter. (This is shown on the front cover of the present issue.) When the plane lands on the platform the bank of air between them is removed; in other words, a partial vacuum is created which will make the plane come to a stop in a measurably shorter distance and eliminate the usual bumping. Conversely, when the plane is to leave the platform, the fans under its level are put in reverse to create a tremendous upward blast, which the inventor believes will facilitate the launching operations. However, in order to prevent the possibility of overshooting the mark, safety nets have been provided at the far end and on the sides so that after the plane has gone a certain distance on the platform the safety net rises automatically. The tilt, which can be given to the platform, will also facilitate stopping the plane in a shorter distance.

For night flying, complete equipment, including boundary lights, obstacle lights, and an illuminated wind cone would be made available. The inventor estimates that a complete installation of such a flying platform would cost about $150,000 for the first model and about $100,000 for each additional one.