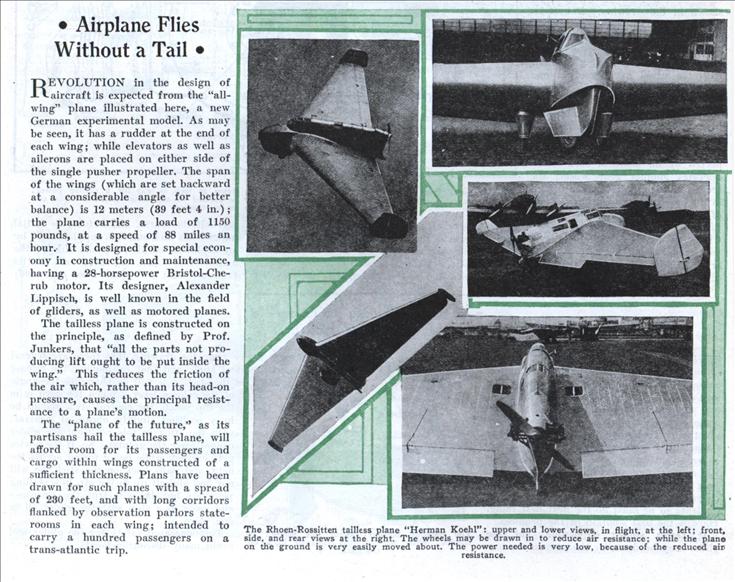 Airplane Flies Without a Tail

Revolution in the design of aircraft is expected from the “all-wing” plane illustrated here, a new German experimental model. As may he seen, it has a rudder at the end of each wing; while elevators as well as ailerons are placed on either side of the single pusher propeller. The span of the wings (which are set backward at a considerable angle for better balance) is 12 meters (39 feet 4 in.); the plane carries a load of 1150 pounds, at a speed of 88 miles an hour. It is designed for special economy in construction and maintenance, having a 28-horsepower Bristol-Cherub motor. Its designer, Alexander Lippiseh, is well known in the field of gliders, as well as motored planes.

The tailless plane is constructed on the principle, as defined by Prof. Junkers, that “all the parts not producing lift ought to be put inside the wing.” This reduces the friction of the air which, rather than its head-on pressure, causes the principal resistance to a plane’s motion.

The “plane of the future,” as its partisans hail the tailless plane, will afford room for its passengers and cargo within wings constructed of a sufficient thickness. Plans have been drawn for such planes with a spread of 230 feet, and with long corridors flanked by observation parlors staterooms in each wing; intended to carry a hundred passengers on a trans-atlantic trip.