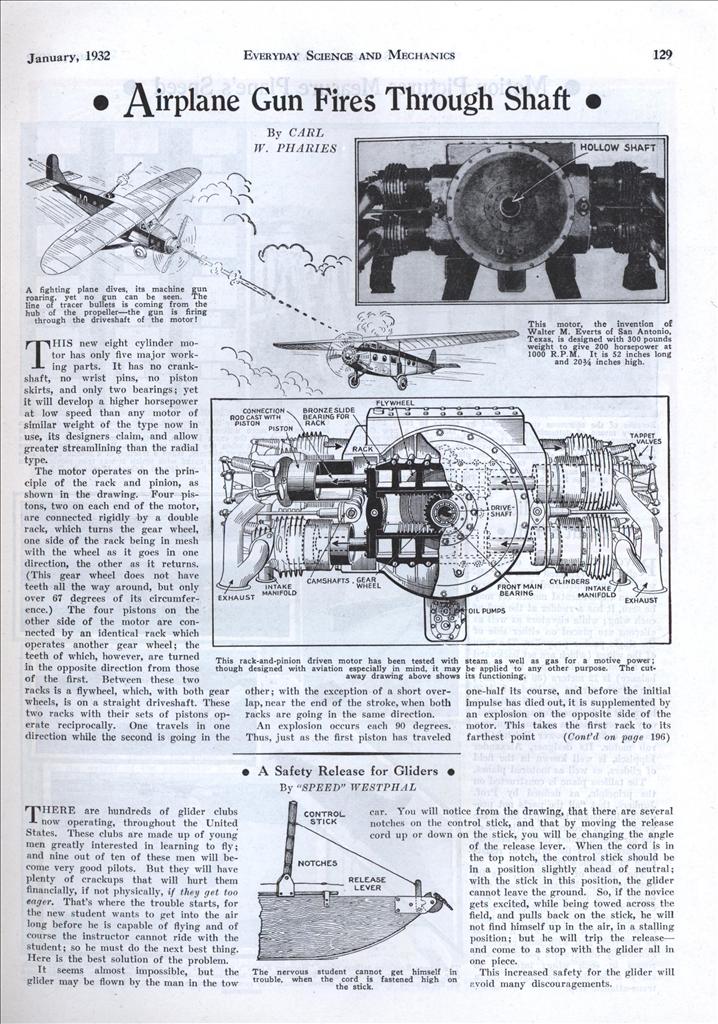 THIS new eight cylinder motor has only five major working parts. It has no crankshaft, no wrist pins, no piston skirts, and only two bearings; yet it will develop a higher horsepower at low speed than any motor of similar weight of the type now in use, its designers claim, and allow greater streamlining than the radial type.

The motor operates on the principle of the rack and pinion, as shown in the drawing. Four pistons, two on each end of the motor, are connected rigidly by a double rack, which turns the gear wheel, one side of the rack being in mesh with the wheel as it goes in one direction, the other as it returns. (This gear wheel does not have teeth all the way around, but only over 67 degrees of its circumference.) The four pistons on the other side of the motor are connected by an identical rack which operates another gear wheel; the teeth of which, however, are turned in the opposite direction from those of the first. Between these two racks is a flywheel, which, with both gear wheels, is on a straight driveshaft. These two racks with their sets of pistons operate reciprocally. One travels in one direction while the second is going in the other; with the exception of a short overlap, near the end of the stroke, when both racks are going in the same direction.

An explosion occurs each 90 degrees. Thus, just as the first piston has traveled one-half its course, and before the initial impulse has died out, it is supplemented by an explosion on the opposite side of the motor. This takes the first rack to its farthest point where for an instant, it is not in mesh with the gear wheel.

The stopping of the rack and the beginning of its return is accomplished by a cam on the flywheel which catches a pin on the rack. As the pistons reach their extremity, this cam is just past its center and on the decline. The motor then fires directly into the cam. Thus the rack is already on its return, when the gear wheel and lower part of the rack mesh and receive a further impulse to carry it toward the other end.

The rack on the other side of the flywheel is operating in the same manner at the same time, but in the opposite direction. As the motor fires at each 90 degrees, the driveshaft receives four separate impulses in each revolution. Because of this continuous flow of power, the motor does not depend so much on the flywheel as the ordinary motor; that illustrated weighs only 32 pounds. Its chief function is to act as a stabilizer and carry the cams. The fact that the design does not place much emphasis on the flywheel will permit instant reversing when the principle is applied to marine and stationary models.

Since the pistons move always in a straight line, there is none of the lost power found in the crankshaft models when the pistons approach either end of the stroke. The cylinders in the motor pictured have a diameter of 4-5/8 inches and a 5-3/4-inch stroke. Because there is no side thrust against the piston, piston skirts are eliminated. A floating piston, only wide enough to carry the rings, is used. The piston and connecting rod is one casting, making the wrist pin unnecessary. The cylinders are arranged in a perfect square; the intake manifold for all four cylinders, which goes right through the middle, is less than a foot long.

Each rack, of chrome nickel steel, 3-3/8 inches wide, is carried on a bronze shoe. The contact between these bronze slides is the only place in the motor where there is a possibility of noticeable friction, and it will operate in a bath of oil.

The driveshaft, 34-1/2 inches long in this model, is supported at each end by a ball bearing of the latest design; these and the camshaft supports are the only bearings in the whole motor. It is this straight driveshaft that has attracted the most favorable comment from Army engineers who have examined the motor. It is hollow, having a 1-1/2-inch opening the entire length; a machine gun mounted in the cockpit can fire directly through the shaft. This will eliminate the intricate timing and synchronizing now necessary to allow guns to fire through the propeller.