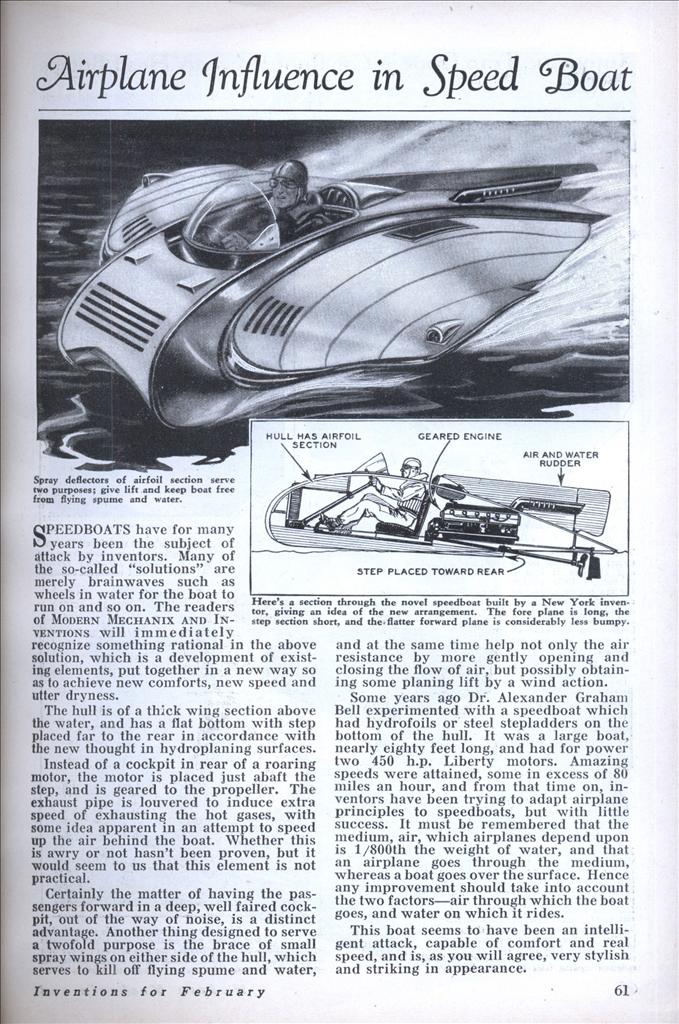 SPEEDBOATS have for many years been the subject of attack by inventors. Many of the so-called “solutions” are merely brainwaves such as wheels in water for the boat to run on and so on. The readers of Modern Mechanix and Inventions will immediately recognize something rational in the above solution, which is a development of existing elements, put together in a new way so as to achieve new comforts, new speed and utter dryness.

The hull is of a thick wing section above the water, and has a flat bottom with step placed far to the rear in accordance with the new thought in hydroplaning surfaces.

Instead of a cockpit in rear of a roaring motor, the motor is placed just abaft the step, and is geared to the propeller. The exhaust pipe is louvered to induce extra speed of exhausting the hot gases, with some idea apparent in an attempt to speed up the air behind the boat. Whether this is awry or not hasn’t been proven, but it would seem to us that this element is not practical.

Certainly the matter of having the passengers forward in a deep, well faired cockpit, out of the way of noise, is a distinct advantage. Another thing designed to serve a twofold purpose is the brace of small spray wings on either side of the hull, which serves to kill off flying spume and water, and at the same time help not only the air resistance by more gently opening and closing the flow of air, but possibly obtaining some planing lift by a wind action.

Some years ago Dr. Alexander Graham Bell experimented with a speedboat which had hydrofoils or steel stepladders on the bottom of the hull. It was a large boat, nearly eighty feet long, and had for power two 450 h.p. Liberty motors. Amazing speeds were attained, some in excess of 80 miles an hour, and from that time on, inventors have been trying to adapt airplane principles to speedboats, but with little success. It must be remembered that the medium, air, which airplanes depend upon is 1/800th the weight of water, and that: an airplane goes through the medium, whereas a boat goes over the surface. Hence any improvement should take into account the two factorsâ€”air through which the boat goes, and water on which it rides.

This boat seems to have been an intelligent attack, capable of comfort and real speed, and is, as you will agree, very stylish and striking in appearance.