Then the interstate highway system came a long and changed the game, then commercial air travel did it again.

I have to admit that when i read the headline I was hoping more for something like this. 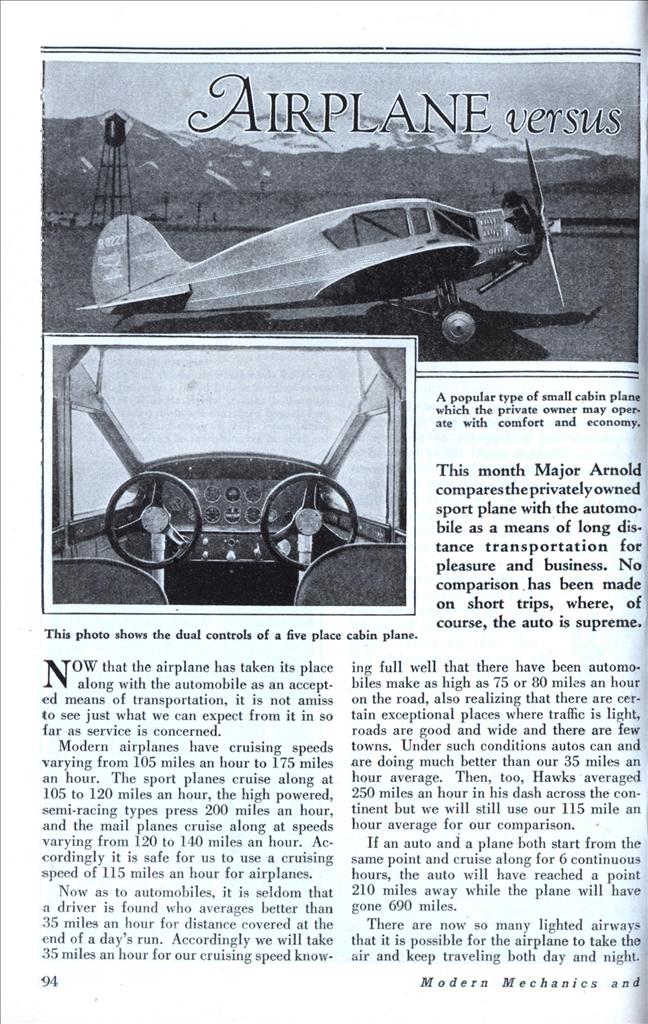 U.S. Army Air Corps This month Major Arnold compares the privately owned sport plane with the automobile as a means of long distance transportation for pleasure and business. No comparison has been made on short trips, where, of course, the auto is supreme.

NOW that the airplane has taken its place along with the automobile as an accepted means of transportation, it is not amiss to see just what we can expect from it in so far as service is concerned.

If an auto and a plane both start from the same point and cruise along for 6 continuous hours, the auto will have reached a point 210 miles away while the plane will have gone 690 miles.

There are now so many lighted airways that it is possible for the airplane to take the air and keep traveling both day and night.

Let us assume that both airplane and auto start out from Dayton, Ohio and travel west and that the auto does not stop for gas or oil or if it does the time is negligible. With our plane, however, we must stop every four hours for gas and oil. Accordingly we figure a loss of three-fourths of an hour at the end of every four hours’ travel of the plane. Therefore, at the end of the twenty-four hours the auto will be at Grand Island, Neb., while the plane will have passed over San Francisco and will be 300 miles out over the Pacific.

Bad weather is not the bugaboo to the airman that it used to be. Planes fly now through rain, snow and low clouds. Accordingly it is safe to assume that there are 200 flying days a year. Actually the air mail operates 350 days in practically all parts of the United States. However, as both planes and autos must go in for repairs and maintenance when they are on regular runs, let us assume that we have 200 working days a year and that we travel for 6 hours every day.

At the end of the year the auto will have covered 42,000 miles and the plane 138,000 miles. Now actually there are very few autos that cover such a distance in a year while there are many airplanes on regular air lines which cover as high as 150,000 miles a year. Furthermore, at the end .of the year’s run with 42,000 miles in back of it the auto is ready for either the junk man or the second hand dealer. With the airplane it is different.

Now compare the radius of activity of the auto against that of the plane. If Dayton is the starting point and both start out traveling for 6 hours the auto will reach a point some 60 miles south of Louisville, Ky., while the plane will have reached Mobile, Ala. For week end trips, assuming that all travel is done in four or five hours on Saturday and a similar amount for the return trip on Sunday, the autoist can reach South Bend, perhaps Chicago, Louisville, Charlestown, W. Va., Cleveland and Detroit. Compare that with the airman who can choose between such cities as Milwaukee, St. Louis, Memphis, Birmingham, Raleigh, Richmond, Washington, Philadelphia and New York.

In these comparisons we have given the auto the best of it, for it has been assumed that both auto and plane travel in a straight line to their destination. Perhaps some day there will be such perfect roads but today it is seldom that a driver can arrive at his destination without covering about one-third more distance than the air line.

While the plane may be held up by head winds one day, tail winds are sure to average up the flying time sooner or later.

People long since have recognized the limitations of the auto. There are many parts of the United States where even today, all autos stay off the roads for 24 to 36 hours after a heavy rain. Few people take their cars out for pleasure during a blizzard, on icy streets, in heavy fog or when the snow is piled up several feet deep. In the same way people will ultimately learn the limitations of the airplane. They will not expect it to do the impossible.

The time will come when our airplane travel will be treated in the same matter-of-fact manner as that of the auto and train. As the days pass, the public seems to appreciate more and more the advantages that the plane has over earth bound transportation.

In case of necessity the plane can travel through all kinds of weather conditions. Watch the air mail. However, just because it can is no reason for tempting fate. Even railroad trains are sometimes delayed for hours and in some cases stopped altogether by heavy snow storms.