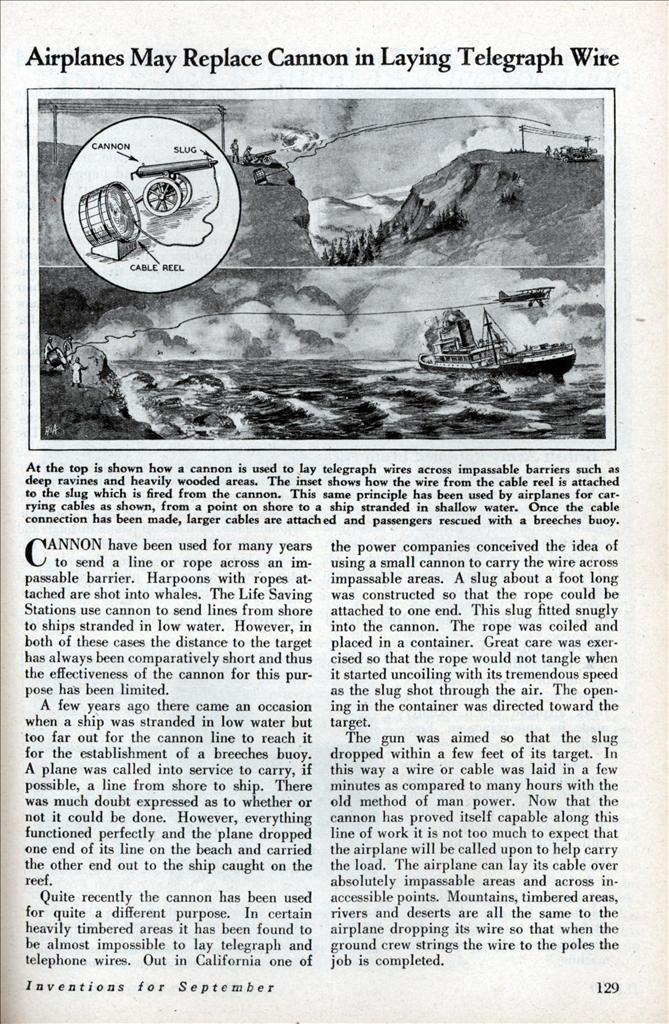 CANNON have been used for many years to send a line or rope across an impassable barrier. Harpoons with ropes attached are shot into whales. The Life Saving Stations use cannon to send lines from shore to ships stranded in low water. However, in both of these cases the distance to the target has always been comparatively short and thus the effectiveness of the cannon for this purpose has been limited.

A few years ago there came an occasion when a ship was stranded in low water but too far out for the cannon line to reach it for the establishment of a breeches buoy. A plane was called into service to carry, if possible, a line from shore to ship. There was much doubt expressed as to whether or not it could be done. However, everything functioned perfectly and the plane dropped one end of its line on the beach and carried the other end out to the ship caught on the reef.

Quite recently the cannon has been used for quite a different purpose. In certain heavily timbered areas it has been found to be almost impossible to lay telegraph and telephone wires. Out in California one of the power companies conceived the idea of using a small cannon to carry the wire across impassable areas. A slug about a foot long was constructed so that the rope could be attached to one end. This slug fitted snugly into the cannon. The rope was coiled and placed in a container. Great care was exercised so that the rope would not tangle when it started uncoiling with its tremendous speed as the slug shot through the air. The opening in the container was directed toward the target.

The gun was aimed so that the slug dropped within a few feet of its target. In this way a wire or cable was laid in a few minutes as compared to many hours with the old method of man power. Now that the cannon has proved itself capable along this line of work it is not too much to expect that the airplane will be called upon to help carry the load. The airplane can lay its cable over absolutely impassable areas and across inaccessible points. Mountains, timbered areas, rivers and deserts are all the same to the airplane dropping its wire so that when the ground crew strings the wire to the poles the job is completed.