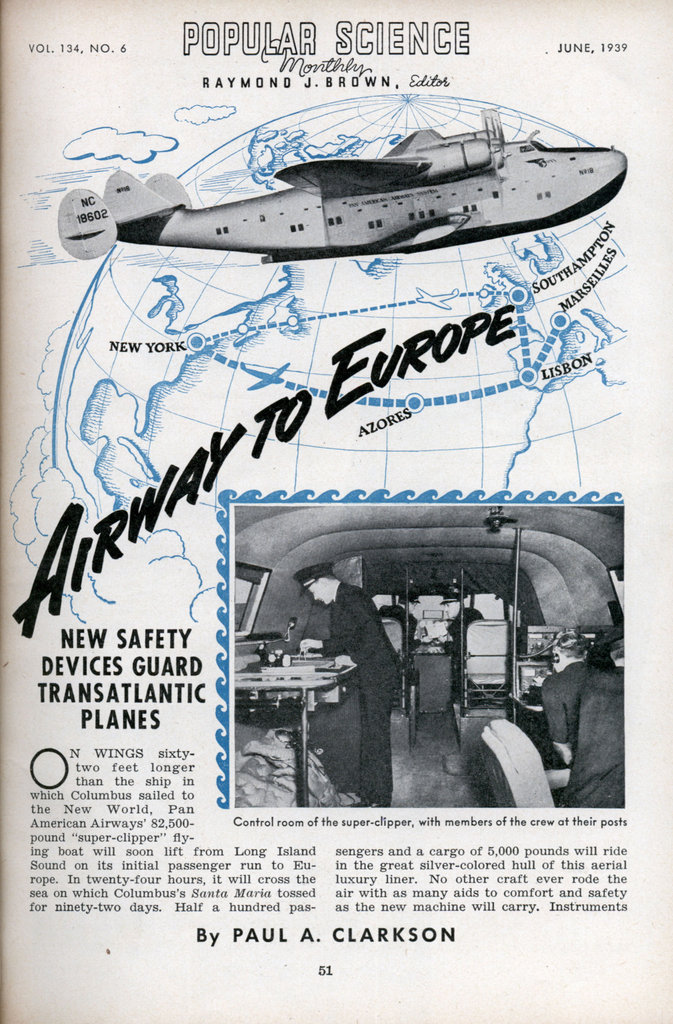 By PAUL A. CLARKSON

ON WINGS sixty-two feet longer than the ship in which Columbus sailed to the New World, Pan American Airways’ 82,500-pound “super-clipper” flying boat will soon lift from Long Island Sound on its initial passenger run to Europe. In twenty-four hours, it will cross the sea on which Columbus’s Santa Maria tossed for ninety-two days. Half a hundred passengers and a cargo of 5,000 pounds will ride in the great silver-colored hull of this aerial luxury liner. No other craft ever rode the air with as many aids to comfort and safety as the new machine will carry. Instruments so clever that they almost think will assist the pilots and protect the passengers. Throughout the flight, a delicate analyzing mechanism will suck air from all parts of the ship, flashing a red warning light if carbon monoxide gas or other impurities are present. Soundproofing will reduce the noise within the cabin to less than that of a railway coach. The whole interior will be air-conditioned and kept at a constant temperature. Five seven-room houses could be warmed by the plane’s heating system.

Built at the Boeing plant in Seattle, Wash., the new transatlantic sky boat— the first of a fleet of six—is the biggest airplane in the world. Its hull is 105 feet in length and its wings stretch 152 feet from tip to tip. With all four of its 1,500-horsepower Wright Cyclone engines thundering at full throttle, the all-metal craft can climb to 21,000 feet with a useful load greater than the weight of the ship itself.

Spinning fourteen-foot, three-bladed steel propellers, the quartet of engines can drag the big boat through the air at a top speed of more than 200 miles an hour. At cruising speed, 150 miles an hour, one filling of the tanks will carry the transatlantic sky liner 4,275 miles. An average automobile could travel more than twice around the world on the 4,300 gallons of high-test fuel the tanks will hold.

Throughout the ocean voyage, instruments will show the temperature of each of the fifty-six cylinder heads in the air-cooled power plants. Every motor has its own fire extinguisher built into the wings of the plane, and catwalks through the interior of the great supporting surfaces enable mechanics to reach the engines and make adjustments and repairs in flight. With two of its four motors out of commission, the flying boat can still remain in the air.

Beneath every passenger seat, a special compartment will hold a life jacket, while ten-man life rafts, which can be quickly inflated by built-in gas cartridges, will be carried at strategic points within the hull. In a few seconds, thirty doors and windows can be converted into emergency exits. Jerking out a small lever near-by will cause the window or door, frame and all, to drop from its place.

To provide every possible convenience for the man who handles the controls, various innovations have been incorporated in the design of the new ship. A small button on the control wheel permits the pilot to illuminate the instrument panel without taking his hands from the controls. An automobile-type sun visor can be swung down when the machine is flying toward the rising or setting sun. By pulling down a lever overhead, the pilot can lift a powerful searchlight into position to aid in taxiing about after a night landing.

Two other innovations help control the boat on the water. To increase the ease of maneuvering about before a take-off and after a landing, an underwater rudder operates in conjunction with the air rudders. “Sea wings,” technically known as hydro-stabilizers, give the machine greater side-to-side stability, especially in heavy seas. These sturdy, winglike floats jut out from either side of the hull.

Inside the double-decked metal hull, life during a transatlantic flight will be like life in an up-to-date hotel. A galley, complete with ice boxes and steam tables, will permit stewards to prepare food for ninety people. To conserve weight, special lightweight silverware will be used at mealtime. During the voyage, passengers will read, smoke, walk about from room to room. Different parts of the plane will be connected by telephone. There will be lounges, dressing rooms, smoking rooms, private compartments —even a honeymoon suite—on board the aerial leviathan.

Sometime this month, with spray glistening on its metal hull, the super-clipper will lift from the water off North Beach Airport, New York City, and head out over the ocean, taking the southern route to Europe. The coastline will drop behind the triple stabilizers at the tail; 2,422 miles of tossing water will slip beneath the wide-spread wings. Then, on a long slant, the ship will slide down, skim the waves, and wallow to a stop at the Azores. Charging away again in a cloud of spray, it will take to the air, winging on to Lisbon, Portugal, before the final, quick hop to its destination, Marseilles, France, or Southampton, England. Later in the summer, the great-circle route to Ireland and England, the path followed by Lindbergh, will be used by the super-clipper. The tentative fare for the transatlantic journey is $450. Mail and express will go for twenty-five cents a half ounce.

Since 1937, when survey flights across the Atlantic were begun by Pan American pilots in smaller flying boats, careful preparations have been made for the inauguration of regular service on the ocean airway. America, England, Germany, and France are racing for priority honors in starting the service. Refinements in detail and improvements for safety have been stimulated by this race for a rich trade route of the air. Culminating this advance comes the new super-clipper, soon to make its initial passenger flight.