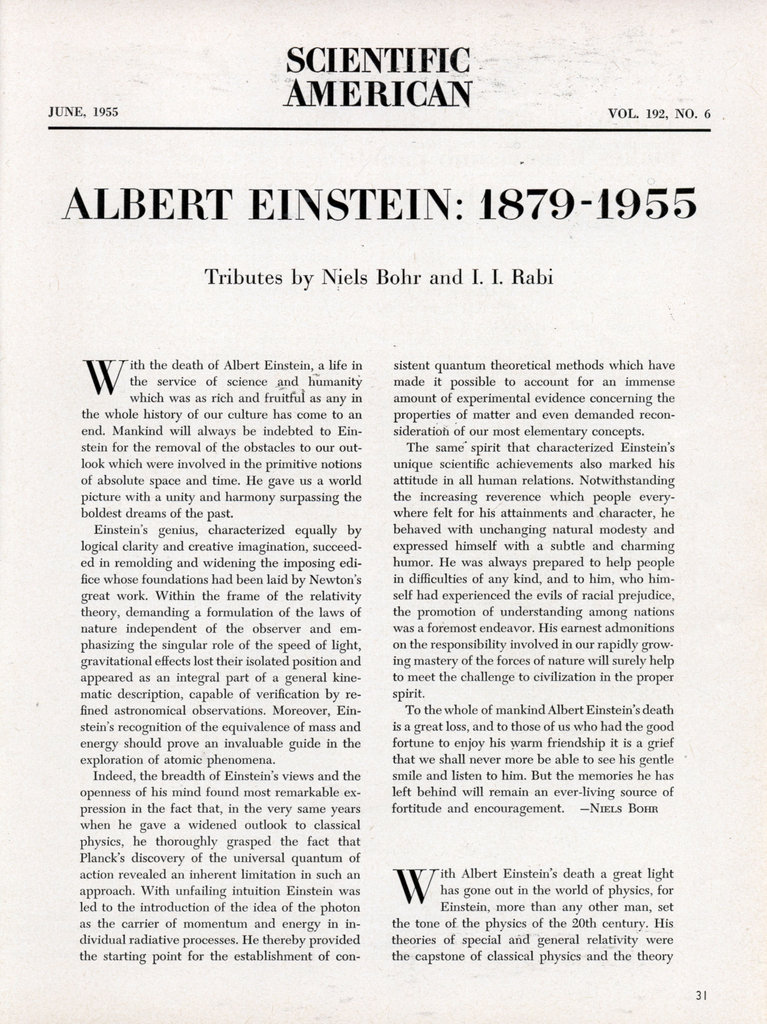 Einstein’s genius, characterized equally by logical clarity and creative imagination, succeeded in remolding and widening the imposing edifice whose foundations had been laid by Newton’s great work. Within the frame of the relativity theory, demanding a formulation of the laws of nature independent of the observer and emphasizing the singular role of the speed of light, gravitational effects lost their isolated position and appeared as an integral part of a general kinematic description, capable of verification by refined astronomical observations. Moreover, Einstein’s recognition of the equivalence of mass and energy should prove an invaluable guide in the exploration of atomic phenomena.

Indeed, the breadth of Einstein’s views and the openness of his mind found most remarkable expression in the fact that, in the very same years when he gave a widened outlook to classical physics, he thoroughly grasped the fact that Planck’s discovery of the universal quantum of action revealed an inherent limitation in such an approach. With unfailing intuition Einstein was led to the introduction of the idea of the photon as the carrier of momentum and energy in individual radiative processes. He thereby provided the starting point for the establishment of consistent quantum theoretical methods which have made it possible to account for an immense amount of experimental evidence concerning the properties of matter and even demanded reconsideration of our most elementary concepts.

The same spirit that characterized Einstein’s unique scientific achievements also marked his attitude in all human relations. Notwithstanding the increasing reverence which people everywhere felt for his attainments and character, he behaved with unchanging natural modesty and expressed himself with a subtle and charming humor. He was always prepared to help people in difficulties of any kind, and to him, who himself had experienced the evils of racial prejudice, the promotion of understanding among nations was a foremost endeavor. His earnest admonitions on the responsibility involved in our rapidly growing mastery of the forces of nature will surely help to meet the challenge to civilization in the proper spirit.

To the whole of mankind Albert Einstein’s death is a great loss, and to those of us who had the good fortune to enjoy his warm friendship it is a grief that we shall never more be able to see his gentle smile and listen to him. But the memories he has left behind will remain an ever-living source of fortitude and encouragement. —Niels Bohr

With Albert Einstein’s death a great light has gone out in the world of physics, for Einstein, more than any other man, set the tone of the physics of the 20th century. His theories of special and general relativity were the capstone of classical physics and the theory of fields. His theory of light quanta and his later demonstration of the nature of the fluctuations of “black body” radiation raised the paradox of the wave-particle duality, which was partly resolved two decades later in the principle of complementarity of Niels Bohr and Werner Heisenberg.

His 1917 paper, introducing the ideas of spontaneous and stimulated emission of radiation, was the first clear statement of the statistical nature of fundamental atomic phenomena. The famous Einstein A and B coefficients led to the quantitative use of the correspondence principle and to the formulation of the Kramers-Heisenberg dispersion formula, which in turn led to Heisenberg’s matrix mechanics. Einstein was therefore in a very real sense the founder of the statistical theory of fundamental atomic phenomena.

There is scarcely any important fundamental idea in modern physics whose origin does not trace back at least in part to Einstein. Yet, like many another father, he was not really satisfied with the children of his scientific imagination. He never regarded his mighty contributions to quantum theory as other than provisional suggestions for the ordering of phenomena. The subsequent formulations of quantum mechanics and especially the thoroughgoing statistical interpretations were to him philosophically and esthetically repugnant.

The Einstein-Bose statistics and the Einstein condensation phenomenon were his last important positive contributions to quantum theory. His subsequent role with respect to quantum theory was that of a critic. He applied the force of his great imagination to the construction of imaginary experiments which involved the theory in seemingly paradoxical and contradictory predictions. The resolution of these paradoxes, chiefly through the efforts of Bohr, served to refine and clarify the principle of complementarity but left Einstein unconvinced.

His real love was the theory of fields, which he pursued with unremitting vigor to the very end of his more than 50 years of active scientific life. This preoccupation is to a large degree the key to his scientific personality. The theory of general relativity was constructed on the basis of a physical observation of the equivalence of inertial and gravitational mass under certain simple circumstances. Beyond that, his guiding principles were his esthetic and philosophical urge for simplicity and symmetry. His intuition and taste led him to believe that the equivalence principle was true in general, and that the equations of physics must be covariant in all systems of coordinates. With these guidelines and with the use of mathematical tools already at hand, he built a theory of gravitation and of the structure of the cosmos.

Like a mystic who has had a divine illumination, Einstein in his search for the ideal could be satisfied with nothing less than a theory which would encompass all phenomena—atomic and cosmic. He once remarked to me in a discussion concerning the newly discovered meson: “We already know that the electron is quantized in charge and mass. Should not this be enough empirical information for a theory of matter?” It was a goal of this grandeur that drove him in his search for a unified field theory.

Einstein was a unique personality. He was not attracted by fame or fortune nor swayed by the opinions of the majority. He knew his talent and guarded it jealously against outside interference. Although fearless in support of any cause he considered worthy, he gave only so much of himself and no more. Physics was his life, and he lived it according to his own lights, with complete objectivity and integrity.

He was the prince of physicists, and the imprint of his mighty strides will give direction to his beloved science for generations to come.