Reading through this I found my self continually wanting to make everything “.net” instead of ” Net”. 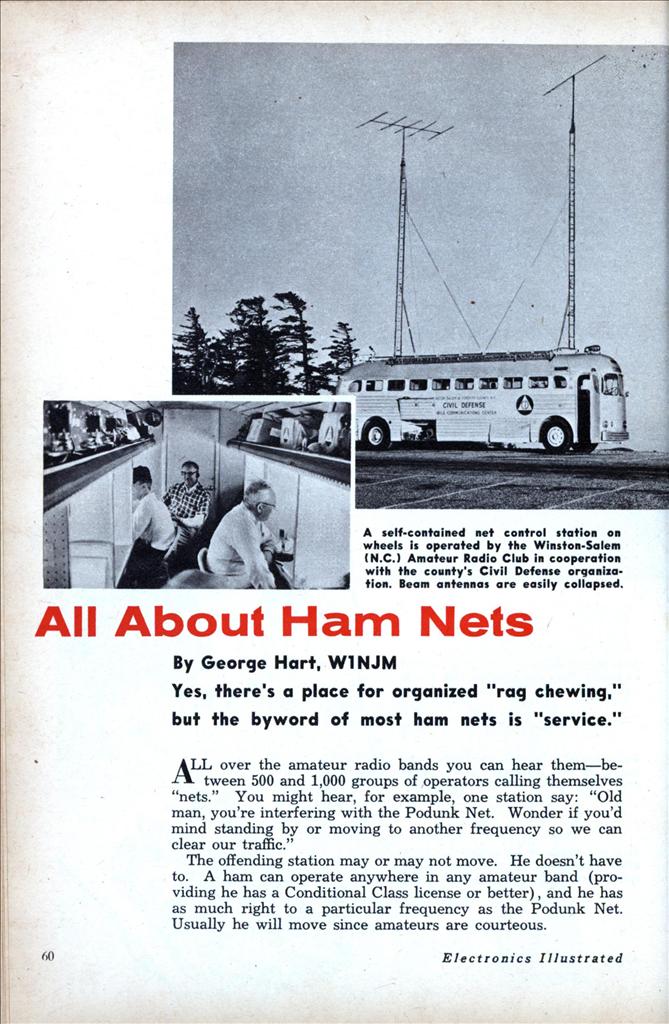 All About Ham Nets

Yes, there’s a place for organized “rag chewing,” but the byword of most ham nets is “service.”

ALL over the amateur radio bands you can hear them—between 500 and 1,000 groups of operators calling themselves “nets.” You might hear, for example, one station say: “Old man, you’re interfering with the Podunk Net. Wonder if you’d mind standing by or moving to another frequency so we can clear our traffic.”

The offending station may or may not move. He doesn’t have to. A ham can operate anywhere in any amateur band (providing he has a Conditional Class license or better), and he has as much right to a particular frequency as the Podunk Net. Usually he will move since amateurs are courteous.

When a group of amateurs all get on the same frequency and one station at a time transmits while the rest listen, we have a “round table.” Usually they just take turns and each, in turn, talks about anything or about nothing. When one of the stations assumes charge and tells the others when to transmit and to whom, this station is called the “net control station” and the whole group operating in this fashion becomes a “net,” or network. Sound regimented? It is, to a certain extent, although no one has to be in the net if he doesn’t want to be.

Nets operate for a number of reasons such as preparing to provide emergency communications, or handling traffic (third party messages). There are training nets, such as those attempting to build up code speed. Some nets involve special interest groups within or outside the field of radio, such as doctors, dentists, teenagers, YLs (young ladies), or fraternal organizations. And some of them operate just for the good old fun of yakking together.

Some nets include only amateurs in a particular city or radio club, some extend through county or state, and some even spread from coast to coast and beyond!

Depending on what it does, what it is for and who is in it, a net might operate by voice (‘phone), Morse code (CW) or radioteletype (RTTY). Amateur TV nets are also on the horizon. CW nets may be slow, medium or high speed, depending upon the proficiency level of the net members.

How can you identify a net when you hear one? Almost without exception they begin with a “call up.” The net control station comes on at a prearranged time with a general call to all net members, something like this: “Calling the Podunk Net, calling the Podunk Net, this is K2ABC, net control station. The Podunk Net operates daily on this frequency starting at 7:30 P.M., Central Standard Time, for the purpose of emergency communication in the Podunk area. Amateur stations operating on or near this frequency are re- quested to stand by or move to another frequency while the net is in session.”

He then invites net members to “report in,” stating their location, any messages they have to send (or “traffic on the hook”). This “reporting in” may be at random, by alphabetical or prearranged order, or by roll call.

On CW nets the procedure is similar, except that abbreviations are used because it takes longer to say things via CW than by voice. The CW net control might send, for example: “PN (Podunk Net) PN PN DE (from) K2ABC K2ABC K2ABC QNN (net control station) QNZ (adjust your frequency to mine) QND (the net is directed) QNI (stations report into the net) QNA (by prearranged order) K (go ahead).

Long ago amateurs discovered that they could be useful in providing emergency communications during floods, fires, storms, and explosions which would wipe out telephone and telegraph lines, isolating communities. A ham or two in the stricken area would crank up their rigs from batteries or gasoline generators and establish a communication with the outside world. As this kind of thing became more frequent, the amateurs decided that it could be done more effectively if they were prepared and trained for it.

So about 25 years ago the ARRL organized the Amateur Radio Emergency Corps and encouraged amateurs to form local groups, prepare equipment, lay plans and conduct operator training for this specific purpose. Today there are about 1800 amateur Emergency Coordinators and over 40,000 amateurs “signed up” in the Emergency Corps.

Radio amateurs in this country can do something that amateurs in most countries are forbidden to do: handle messages for third parties. What kind of messages? Why, any kind at all, just so they don’t get paid for it. They are usually written and handled in a standard amateur message form, not unlike the Western Union form. These messages are called “traffic,” hence the nets that handle them are called “traffic nets.” The idea is to get the message from its point of origin to its destination in the least possible time by passing it from one amateur to another.

Traffic nets are generally well organized and some of them are set up in “systems.” One such system, sponsored by ARRL, is called the National Traffic System and consists of about 100 nets working together in chains covering the entire U.S., its possessions and Canada. In emergencies, these traffic nets and systems are often the means for handling important point-to-point traffic.

In a sense, the above nets are training nets. Whatever their primary purpose, a great part of it is in getting trained to do a job.

Newcomers to the amateur ranks via the Novice license need training, especially in Morse code. The Novice speed requirement is only five words per minute. You can’t handle much communication at that speed, hence the purposes of many Novice nets are to increase code speed and teach net procedure.

Sometimes a group of amateurs with something in common will get together in a net. Doctors, dentists, religious groups, engineers, pilots, etc., have been known to form nets. A year or so ago a group of doctors formed a net to discuss latest medical developments. Teenagers discuss rock ‘n roll, scouting, sports, television shows (real crazy, dad!). The YLs have their own nationwide fraternal organization, the Young Ladies Radio League (YLRL) and have a number of nets consisting strictly of members of their own sex (no men allowed) , such as the Ironing Board Net, the Nylon Net and the Tangle Net.

A few groups operate just for the sheer pleasure of getting to know each other. Usually started quite spontaneously, they might call themselves the Gum-Beaters Net, the Idiots Net, or the Hot Air Net. No telling what you might hear them talking about.

Most nets are deliberately set up by responsible amateurs for a specific purpose, usually emergency preparedness or traffic handling. These hams are bent on doing something useful with their hobby. -$-