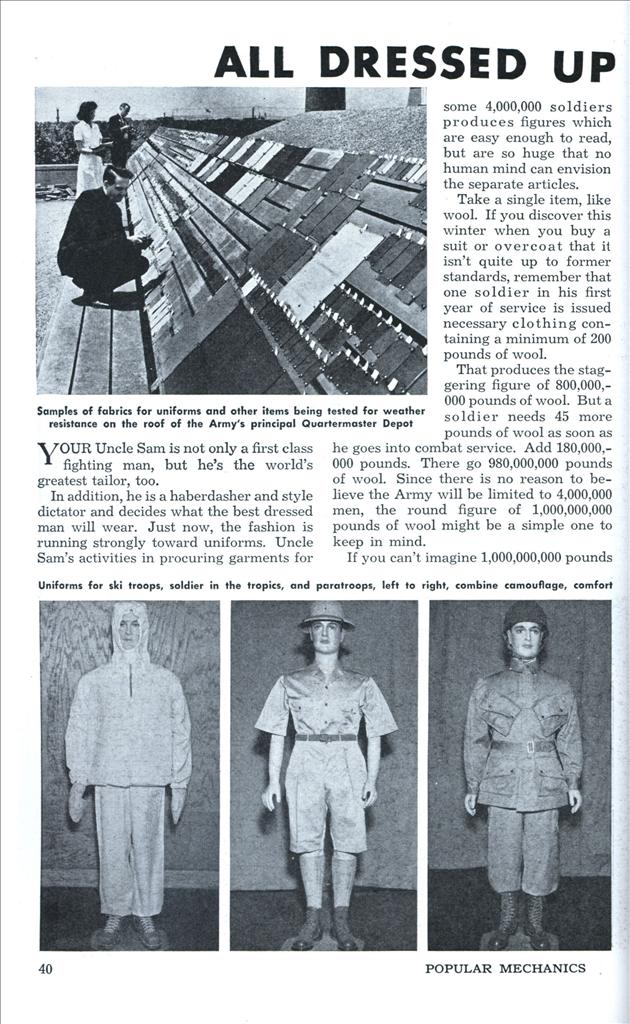 ALL DRESSED UP and SOME PLACE to GO!

YOUR Uncle Sam is not only a first class fighting man, but he’s the world’s greatest tailor, too.

In addition, he is a haberdasher and style dictator and decides what the best dressed man will wear. Just now, the fashion is running strongly toward uniforms. Uncle Sam’s activities in procuring garments for some 4,000,000 soldiers produces figures which are easy enough to read, but are so huge that no human mind can envision the separate articles.

Take a single item, like wool. If you discover this winter when you buy a suit or overcoat that it isn’t quite up to former standards, remember that one soldier in his first year of service is issued necessary clothing containing a minimum of 200 pounds of wool.

And now cotton. It takes approximately four times as much cotton as it does wool to equip an army.

Each selectee is furnished with a uniform and equipment, consisting of some 60 items valued at the army wholesale cost of $200.00. Exclusive of specialized equipment for such forces as paratroops, air corps, and ski troops, which cost more, the basic list of clothing includes: one woolen coat, six pairs of trousers (two woolen), one woolen overcoat, eight pairs of shorts (both woolen and cotton), nine undershirts (both woolen and cotton), two caps (one woolen and one cotton khaki), one cotton field jacket with woolen lining, one pair of woolen olive drab gloves, nine pairs of socks (both woolen and cotton), four neckties, three herringbone twill jackets, three pairs canvas leggings, one herringbone twill hat, one khaki waist belt, three pairs of shoes, six white handkerchiefs, and one steel helmet.

Most of these products are made or purchased in one spot, along with numerous others such as band instruments and flag standards, and that spot is the U. S. Army’s main Quartermaster Depot. It’s one of the busiest places in the business world today.

Clothing the Army is not only a supply job. It is a morale service, too. No soldier is going to feel much like fighting in the Arctic wilds with cold feet. No man in the tropics can battle mosquitoes all night and Japs the next day. A soldier is likely to wonder what he is fighting for if his uniform turns out to be shoddy.

The life of an American soldier may depend on the fastness of the drab, brownish yellow color, imparted by khaki dyes. Improperly dyed khaki fades into a yellowish white which makes a uniformed man a conspicuous target for a sharpshooter. Tropical suns, wear and repeated washings demand top quality dyes and in getting them, the Army has had excellent cooperation from chemical corporations. The Du Pont Company risked $43,000,000 in plants and experiments to be used largely for this purpose.

Nothing made by man in such quantities as the supplies turned out in the huge depot can be absolutely perfect, but the staff is on the job night and day in a miniature city of nearly 100 acres which has its own police and fire protection, water and heating systems, street markings and traffic control. This “City of Supplies” maintains its own fleet of trucks and even its own railroad system, operating over three and one-half miles of track, complete down to the roundhouse which shelters four locomotives.

One laboratory building contains one of the best textile laboratories in the world. Here, fabrics and items of uniform are tested to make sure the high standards required in Army specifications are maintained. Such vigilance has often been referred to as “the first line of defense of the soldier’s health and comfort.”

Textiles are tested for tensile strength, water repellency, wind resistance, resistance to wear, color-fastness, shrinkage, chemical composition, wool content, resistance to the passage of moisture as in raincoat fabrics, reaction when laundered or dry cleaned, and construction of the fabrics. In addition, buttons are tested in a special crushing machine.

Slide fasteners are tested on a machine that subjects these fasteners to thousands of slides. A “robot” machine measures the yardage of spools of thread. The diameter of wool fabrics is magnified 500 times to determine the grade of wool. This machine is used in cases where the visual inspection of the depot’s wool grader is doubtful. Samples are set out on the roof of the laboratory to insure their reaction to weather conditions.

Two cold rooms, capable of producing temperature as low as 68 degrees below zero, are used to determine the warmth of certain fabrics and combination of fabrics. Every conceivable type of chemical and analytical test, including the reaction of gold and other elements from button platings, is conducted in the laboratory building, which is called the “House of Magic.” 1 All testing procedures are established in an effort to determine whether or not the fabrics or finished garments meet specifications established by the research and development branch of the depot.

The cloth which the depot procures is inspected before it goes to the contractor, who fabricates the finished garment. The contractor works from government patterns, uses the government’s materials and findings, and returns the finished garment plus the scrap which is reused. 1 The manufacturing division, which has about 4,000 employes, makes all types of outer clothing, including the latest garments designed for parachute troops and for wear in cold climates. However, it makes only a part of the clothing required by the Armed Forces. The remaining items are produced by private contractors.

One of the most interesting subdivisions of the factory is the special measurement section which takes care of men built out of proportion, both large and small. It recently made a uniform for Joe Louis. Another was made for a sergeant having the following measurements: height, 6 feet; weight, 310 pounds; chest, 60 inches, and leg (inseam) 32 inches. It required approximately 6 yards of cloth to make this man a uniform. The average allowance is 2-1/2 yards.

The manufacturing division occupies a vast amount of floor space and is the largest and most modern uniform factory in the United States. The specifications for the Army wardrobe are the result of careful and long experiments to determine the best materials and best construction. The strictness of the government’s examination of all uniform materials, and their insistence on specified high grades of wool, make manufacturers particularly careful in fulfilling Army orders and guaranteeing “perfect deliveries.” Today’s uniforms and equipment are superior in many particulars to the uniforms furnished officers, during the World War. The aim is not to make a dandy out of the men in service, but to furnish them with good and durable uniforms of excellent quality. Says Major General Edmund B. Gregory, the Quartermaster General: “Our job in the Army is to deliver the goods and that means, among other things, making the American soldier the best clothed soldier in the world.” So, if you find it necessary to skimp somewhere along the line in clothing during the next year, the chances are the Quartermaster Corps has grabbed something for the lads in uniform who deserve the best and all of it they can get.