All-Weather Motorcycles Are Being Modernized (Mar, 1930) 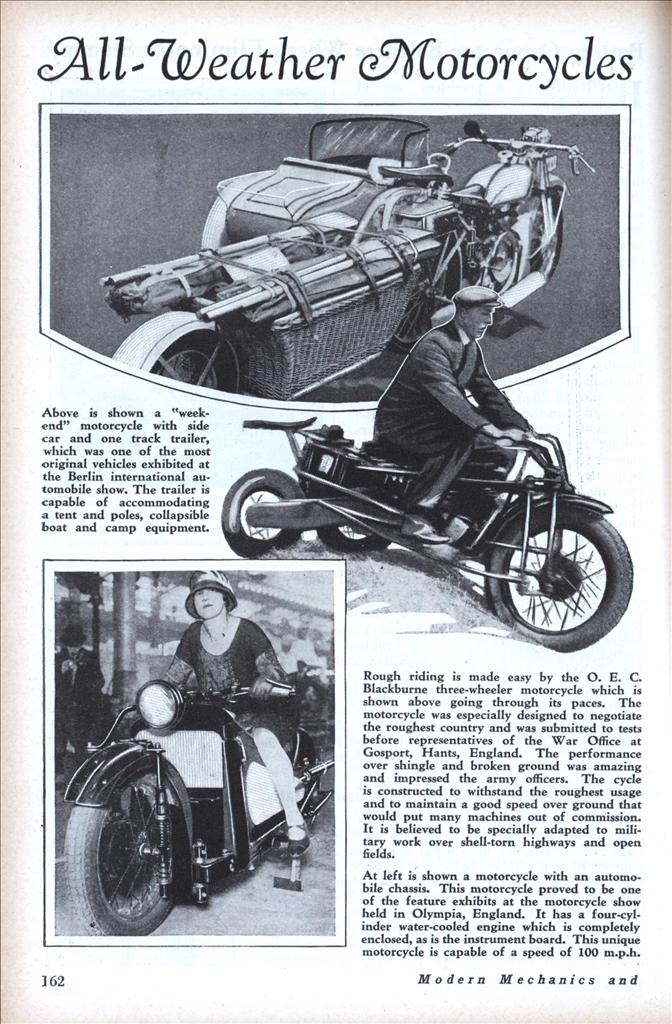 All-Weather Motorcycles Are Being Modernized

Above is shown a “weekend” motorcycle with side car and one track trailer, which was one of the most original vehicles exhibited at the Berlin international automobile show. The trailer is capable of accommodating a tent and poles, collapsible boat and camp equipment.

Rough riding is made easy by the O.E.C. Blackburne three-wheeler motorcycle which is shown above going through its paces. The motorcycle was especially designed to negotiate the roughest country and was submitted to tests before representatives of the War Office at Gosport, Hants, England. The performance over shingle and broken ground was amazing and impressed the army officers. The cycle is constructed to withstand the roughest usage and to maintain a good speed over ground that would put many machines out of commission. It is believed to be specially adapted to military work over shell-torn highways and open fields.

At left is shown a motorcycle with an automobile chassis. This motorcycle proved to be one of the feature exhibits at the motorcycle show held in Olympia, England. It has a four-cylinder water-cooled engine which is completely enclosed, as is the instrument board. This unique motorcycle is capable of a speed of 100 m.p.h.

Here is a side view of the Opel rocket motorcycle which has been built on the same principle as his rocket cars. This exhibit of the Opel Works attracted a great deal of attention at the Berlin Motor Show. It has been successfully tried out by Herr Fritz von Opel who a short time ago startled the world with the first successful flight in a rocket propelled airplane. His experiments with rocket automobiles, motorcycles, and airplanes have been attracting world wide attention.

The new Ascot-Pullin all-weather motorcycle and side-car is shown above as it appeared in the London motorcycle show. The enclosed side-car and well fendered wheel is one of the features of this vehicle shown with a variety of machines intended for service in all kinds of weather. Folding side-cars were among the outstanding features.

Here is a close-up of the complete dashboard fitted to the Ascot-Pullin motorcycle and shown at the London exhibition. There is a three-section windshield, rear vision mirror and usual meters.