I kept looking for the sub-title: “Except people who get eaten by them” 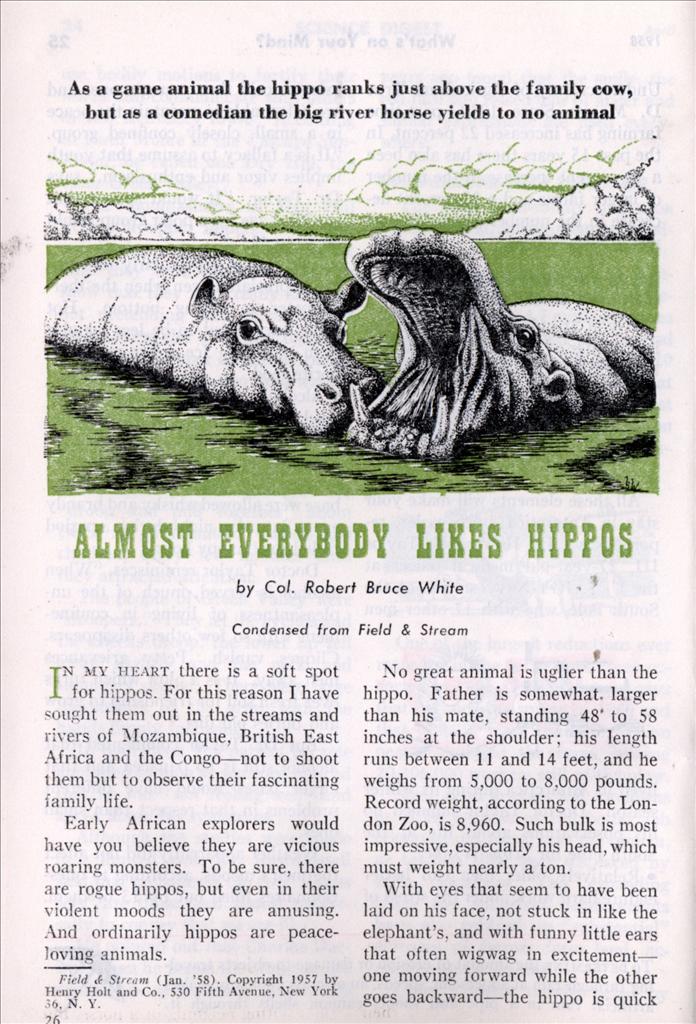 In my heart there is a soft spot for hippos. For this reason T have sought them out in the streams and rivers of Mozambique, British East Africa and the Congo—not to shoot them but to observe their fascinating family life.

Early African explorers would have you believe they are vicious roaring monsters. To be sure, there are rogue hippos, but even in their violent moods they are amusing. And ordinarily hippos are peace-loving animals.

No great animal is uglier than the hippo. Father is somewhat, larger than his mate, standing 48′ to 58 inches at the shoulder; his length runs between 11 and 14 feet, and he weighs from 5,000 to 8.000 pounds. Record weight, according to the London Zoo, is 8,960. Such bulk is most impressive, especially his head, which must weight nearly a ton.

With eyes that seem to have been laid on his face, not stuck in like the elephant’s, and with funny little ears that often wigwag in excitement— one moving forward while the other goes backward—the hippo is quick to detect the presence of an intruder. His nostrils are strategically placed so that he can breathe while almost entirely submerged.

But it’s his slobbering mug that intrigues me most. He seems to revel in yawns that expose a great expanse of pink mouth and gleaming ivories. Like his distant relative the pig, he has incisors, molars and canines, the canines forming big tusks that curve inward and back but never extend beyond his bulging muzzle.

His jaws are powerful enough to tear through crocodile armorplate as readily as you might crunch a celery stalk; a watermelon on his tongue is no more than a strawberry on yours. And what an appetite! He’ll put from 200 to 400 pounds of greenery into his 40- or 50-inch stomach every day.

Hippos are admirably adapted to amphibious life. Their skin secretes a viscous, cinnamon-colored fluid that protects them during extended stays beneath the water and also in dry atmosphere when they come ashore to browse. Their tough, crinkled hide, nearly two inches thick in spots, may cover 200 pounds of fat. They seem almost hairless, but there is short, sparse hair over much of the hide. Tufts are also found on the upper lip, ear tips and the end of the curious, dinky tail. The over-all color effect is a leaden brown.

Coming ashore, the hippo clambers up steep banks, even precipitous ravines, with astonishing power and ease. He walks like no other animal of land or sea. His short but solid legs are set so far apart that their hoofs beat out two separate, parallel tracks, proceeding more or less independently of each other. Traveling single file through the bush, hippos can run faster than man, even gallop. But their ludicrous land gait makes them look like great, ponderous clowns.

The hippo is neither a fast nor a particularly adept swimmer. Power rather than speed is his forte. Built for leisurely paddling or walking on river bottoms, he comes up to the surface at intervals to breathe. That he can submerge for 5 or 6 minutes I do not doubt, but rarely if ever longer—certainly not for 30 minutes, as is widely believed.

Hippos have been clocked trotting along under water at 8 miles an hour. They float like logs and, when alarmed, crash-dive like stones. As they go under, their nostril valves close. The nostrils open with a loud snort and a whale-like blast of water when they surface again.

Hippos love to relax in the still reaches of sluggish rivers, and they stay in the water much of the day. Sometimes they bask drowsily on sandspits, taking little interest in their surroundings, even ignoring the cormorants, starlings and egrets that like to perch on them.

Occasionally they emit weird grunts, burps, snorts and bellows that can be heard a mile away. Their usual cry I can compare only with the exciting neighing of a horse, but it is repeated several times in basso profundo rising to shrill falsetto. Their mating calls are more moolike; in combat, a deep lowing and growling. At night, in the distance, it is not easy to distinguish their cries from the lion’s and the buffalo’s.

Baby hippos are the ugliest infants ever born—absurdly big-headed, fat and crank-tailed. Yet in the soft, helpless way of all babies they are most appealing. The mother hippo’s proud devotion to the homely little rascal is both comical and touching. But life with father can be disastrous; one of mother’s principal jobs is to protect the baby from his father’s insanely jealous rages.

The female gives birth to her solitary babe after 7-1/2 to 8 months’ pregnancy, and 5 to 10 weeks later she may be pregnant again. Birth takes place either in a dry nest among the rushes or. more frequently, in shallow waters.

The raw pink infant weighs from 50 to 75 pounds at birth; after the first month or so he becomes nearly as dark as his parents. He suckles under water, taking nourishment for a minute or so, comes up for breath, and dives again for another nip.

The little fellow can swim before he walks. But to escape crocodiles and a jealous father, he often rides atop mother’s broad back. If he misbehaves, she scolds him, and if that doesn’t work she raps him on the head.

Any number of tales are told about hippos charging and upsetting canoes, then crunching them in their jaws. It happens, all right, but it’s because a baby hippo is nearby and crocs are abundant. Hippos simply will not tolerate crocodiles when there are babies around, although at other times they get along well enough. The enraged hippo that attacks a boat thinks it is some sort of crocodile, and there is a baby to be protected. The hippo has a mild temperament and usually prefers retreat to fight.

During rutting, however, all may not be so peaceful. Then vicious fights are staged for leadership of the herd. Such a battle may last eight hours—with time out periodically for brief rests. Some fights end in the death of both rivals. The combatants rear up on their hind feet, biting at each other furiously; legs, shoulder bones and teeth are broken, hides deeply scarred.

Elderly males that have been expelled from the community, the rogues or outcasts, may become sour on the world, fierce-tempered, truculent. Such a bull will attack anything passing by. For hours he may sit on his fat behind watching his former pals besporting themselves in the river; when they come ashore to forage, he will wander disconsolately away, probably in search of trouble as well as fodder. But really malicious rogues like this are quite rare.

Hippos always follow the same track from one pool to another or to their private pasturage, well-defined trails that crisscross each other in the bush. Apparently each bull maintains for his harem a long, narrow strip of land leading from the river-bank to his private grazing area. Along these passageways and around the periphery of the grazing area the Old Man has deposited his scent at fixed spots to warn off all trespassers.

Hippos are insatiably curious. At a guesthouse in Albert National Park in the Belgian Congo, only a mile from a favorite hippo hangout, the management is often perplexed by uninvited guests. Twice to my knowledge a pair of hippos waddled up the gravel driveway to the stone veranda where after-dinner coffee and liqueurs were being served. There they stopped to gaze at the somewhat disconcerted diners and the electric lights, amazed smirks on their faces, then, their curiosity satisfied, they departed.

Probably the most inquisitive, certainly. the best publicized, of all hippos was Huberta. Between Octo- ber 1928 and June 1930 she wandered all over the province of Natal, her lonely trek extending an estimated 1,200 miles.

She entered Durban, a big city, several times, terrifying early-morning cyclists and pedestrians on downtown West St., invariably disappearing into the river just before the police arrived. She peeped into scores of homes, shops, and schools.

She visited village after village. Once she stopped a railway train by snoozing on the roadbed, refusing to budge despite whistle, bell, escaping steam and angry shouts until gently prodded by the cowcatcher.

But Huberta harmed no one. In time she became royal game, protected by law, a national heroine beloved by all but those unhappy farmers whose gardens she bulldozed flat.

What happened to Huberta? She was shot by an irate farmer ignorant of the law and of the fun her innocent adventures brought to millions of people. And then Huberta sprang her biggest surprise. An autopsy revealed she was a male.