Do you think the RUR on his chest stands for Rossum’s Universal Robots? Or do you think it is the union of Richards and Reffell, the “inventors'” names? 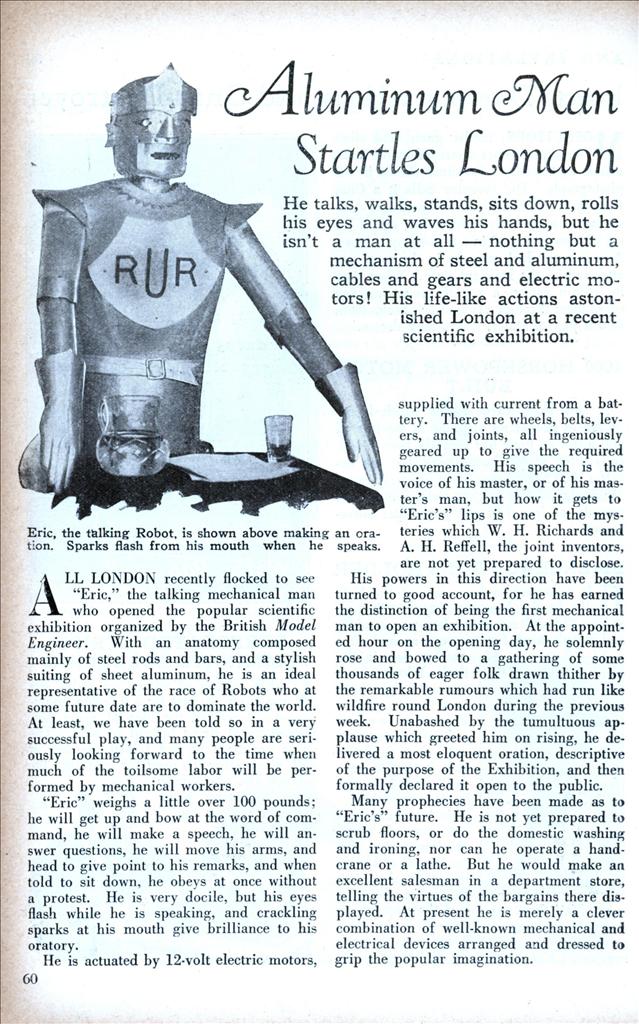 He talks, walks, stands, sits down, rolls his eyes and waves his hands, but he isn’t a man at all — nothing but a mechanism of steel and aluminum, cables and gears and electric motors! His life-like actions astonished London at a recent scientific exhibition.

ALL LONDON recently flocked to see “Eric,” the talking mechanical man who opened the popular scientific exhibition organized by the British Model Engineer. With an anatomy composed mainly of steel rods and bars, and a stylish suiting of sheet aluminum, he is an ideal representative of the race of Robots who at some future date are to dominate the world. At least, we have been told so in a very successful play, and many people are seriously looking forward to the time when much of the toilsome labor will be performed by mechanical workers.

“Eric” weighs a little over 100 pounds; he will get up and bow at the word of command, he will make a speech, he will answer questions, he will move his arms, and head to give point to his remarks, and when told to sit down, he obeys at once without a protest. He is very docile, but his eyes flash while he is speaking, and crackling sparks at his mouth give brilliance to his oratory.

He is actuated by 12-volt electric motors, supplied with current from a battery. There are wheels, belts, levers, and joints, all ingeniously geared up to give the required movements. His speech is the voice of his master, or of his master’s man, but how it gets to “Eric’s” lips is one of the mysteries which W. H. Richards and A. H. Reffell, the joint inventors, are not yet prepared to disclose. His powers in this direction have been turned to good account, for he has earned the distinction of being the first mechanical man to open an exhibition. At the appointed hour on the opening day, he solemnly rose and bowed to a gathering of some thousands of eager folk drawn thither by the remarkable rumours which had run like wildfire round London during the previous week. Unabashed by the tumultuous applause which greeted him on rising, he delivered a most eloquent oration, descriptive of the purpose of the Exhibition, and then formally declared it open to the public.

Many prophecies have been made as to “Eric’s” future. He is not yet prepared to scrub floors, or do the domestic washing and ironing, nor can he operate a hand-crane or a lathe. But he would make an excellent salesman in a department store, telling the virtues of the bargains there displayed. At present he is merely a clever combination of well-known mechanical and electrical devices arranged and dressed to grip the popular imagination.