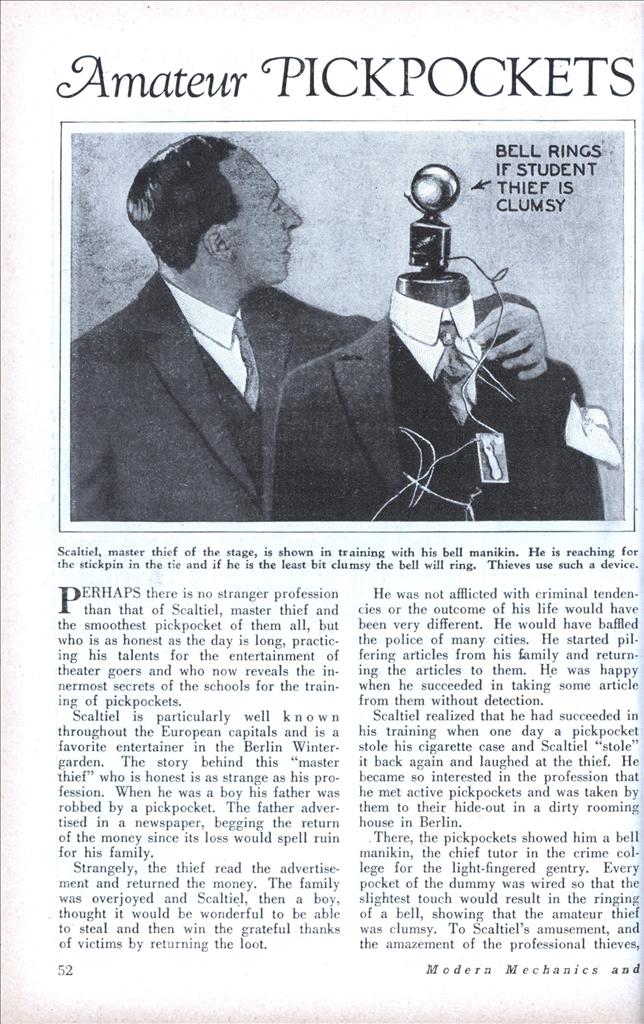 Scaltiel, “master thief” of stage, reveals secrets of light-fingered gentry who operate throughout the world depriving victims of their valuables.

PERHAPS there is no stranger profession than that of Scaltiel, master thief and the smoothest pickpocket of them all, but who is as honest as the day is long, practicing his talents for the entertainment of theater goers and who now reveals the innermost secrets of the schools for the training of pickpockets.

Scaltiel is particularly well known throughout the European capitals and is a favorite entertainer in the Berlin Winter-garden. The story behind this “master thief” who is honest is as strange as his profession. When he was a boy his father was robbed by a pickpocket. The father advertised in a newspaper, begging the return of the money since its loss would spell ruin for his family.

Strangely, the thief read the advertisement and returned the money. The family was overjoyed and Scaltiel, then a boy, thought it would be wonderful to be able to steal and then win the grateful thanks of victims by returning the loot.

He was not afflicted with criminal tendencies or the outcome of his life would have been very different. He would have baffled the police of many cities. He started pilfering articles from his family and returning the articles to them. He was happy when he succeeded in taking some article from them without detection.

Scaltiel realized that he had succeeded in his training when one day a pickpocket stole his cigarette case and Scaltiel “stole” it back again and laughed at the thief. He became so interested in the profession that he met active pickpockets and was taken by them to their hide-out in a dirty rooming house in Berlin.

There, the pickpockets showed him a bell manikin, the chief tutor in the crime college for the light-fingered gentry. Every pocket of the dummy was wired so that the slightest touch would result in the ringing of a bell, showing that the amateur thief was clumsy. To Scaltiel’s amusement, and the amazement of the professional thieves, he succeeded in taking cigarettes from the pockets of the dummy without ringing the bell.

After this test of his skill, Scaltiel decided to display his talents on the stage making an honest living as he had no desire whatever to practice the “art” dishonestly. He constructed his own bell manikin which is pictured herewith and he trains with it daily to retain his delicate touch.

The amateur who thinks that it is easy to take something from another’s pockets without detection has only to try it to find out how difficult it is. There are a whole series of artful tricks used by pickpockets to prevent others than their victims from witnessing their thievery and all of these tricks have been studied by the famous entertainer.

The professional pickpocket generally operates with his left hand while using his right to distract the attention of his victim. This distraction of the victim is one of the most important parts of successful pocket picking. Very often the thief holds a coat or paper in his right hand to shield the left hand which is exploring the pockets of some unsuspecting victim.

Pickpockets as a rule do not choose expensively dressed persons but rather the commonly dressed person, the visitor in the city, near railroad station, in theater crowds, on the street cars. There are numerous ways in which the thieves work according to the opportunities and situations. On a crowded train a watch or wallet is taken from the pocket of a victim who is standing, the pickpocket usually holding up a paper with his right hand while his left hand does the stealing. The loot is often passed to a confederate who leaves the train.

On the streets the pickpockets often work on streetcars or subway stations and stops, wherever there is a crowd. When a man is being jostled in a crowd he is less apt to feel a hand stealing into his pocket or drawing his watch put by the chain. Sometimes a confederate or two of the pickpocket will jostle the intended victim.

A familiar trick is for the pickpocket to stumble and fall to the sidewalk directly in front of his victim. As the thief expects, the victim aids him in regaining his feet and during this contact the pickpocket clings to his victim for support and commits robbery in return for an intended kind act.

Sometimes a thief will go to great lengths to “contact” his victim. He will drop a glove under the seat of some innocent party without being seen. Then the thief will retrieve the glove and offer it to his victim who believes that some polite person has made a mistake. He will speak to the thief, unaware that while he is looking at the thief, the nimble fingers are exploring his pockets or extracting a stick pin or “lifting” a watch. The thief is holding out the glove with his right hand while his left “mit” is at work.

The public is most in danger of being robbed while in a crowd. The theater lines and groups near cloakrooms often harbor pickpockets. Although you may often suspect an innocent party if you are carrying valuables in a crowd beware of the man who holds a newspaper or magazine or has a coat slung over his arm. The pickpocket with a coat over his arm can work easily with one hand shielded by the folds of the garment.

Women who carry their valuables in handbags swung from handles are a constant source of inspiration to pickpockets for even while walking on the street or standing in a streetcar a pickpocket can open the bag, extract the valuables and close the bag without being detected and without much chance of alarming the victim.

The profession of the pickpockets is not by any means limited to men for some of the most skillful of such thieves are women and girls. Often a man will be crowded against a young woman and while he may be embarrassed the girl is not for she may be taking his watch or pocket book. Very often such girls operate with a confederate to whom she will pass her loot. The confederate will then disappear in the crowds.