Modern Mechanix
Issue: May, 1936
Posted in: Movies
Tags: movie making, newsreels
No Comments on Amateurs Capture ACTION for the NEWSREELS (May, 1936)

Amateurs Capture ACTION for the NEWSREELS (May, 1936)

I had no idea that panning a camera used to be called panoraming. Saying: “Don’t panoram or tilt unless absolutely necessary” just sounds weird. 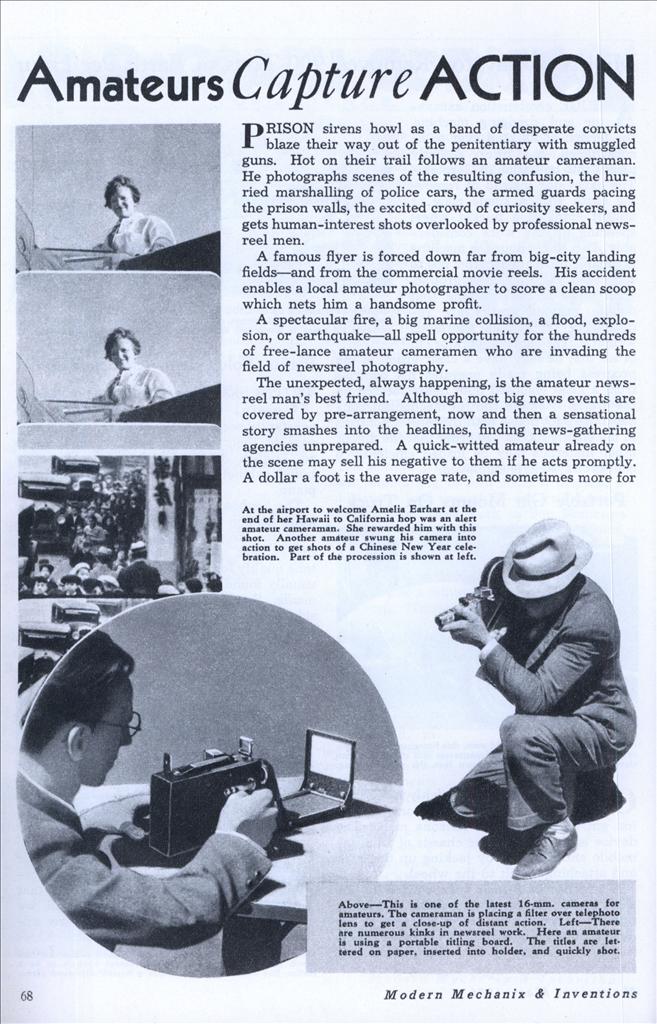 Amateurs Capture ACTION for the NEWSREELS

When a peaceful valley suddenly becomes the scene of a roaring flood, the amateur news cameraman is on the job. Where hurricanes rage or great explosions take their toll, the newsreels depend upon alert amateurs. This article tells how it is done.

PRISON sirens howl as a band of desperate convicts blaze their way out of the penitentiary with smuggled guns. Hot on their trail follows an amateur cameraman. He photographs scenes of the resulting confusion, the hurried marshalling of police cars, the armed guards pacing the prison walls, the excited crowd of curiosity seekers, and gets human-interest shots overlooked by professional news-reel men.

A famous flyer is forced down far from big-city landing fieldsâ€”and from the commercial movie reels. His accident enables a local amateur photographer to score a clean scoop which nets him a handsome profit.

A spectacular fire, a big marine collision, a flood, explosion, or earthquakeâ€”all spell opportunity for the hundreds of free-lance amateur cameramen who are invading the field of newsreel photography.

The unexpected, always happening, is the amateur news-reel man’s best friend. Although most big news events are covered by prearrangement, now and then a sensational story smashes into the headlines, finding news-gathering agencies unprepared. A quick-witted amateur already on the scene may sell his negative to them if he acts promptly. A dollar a foot is the average rate, and sometimes more for exclusive, sensational pictures of national interest. Foreign subjects generally pay double.

Latest in newsreels is one distributed nationally, once a month, for home movie projectors. Recently press representatives sat in a darkened Hollywood projection room and watched the first edition of this sixteen-millimeter reel, shot entirely by amateurs, unfold late flashes from all parts of the country. They saw auto drivers speed around a dirt track in a championship race; watched in turn an athletic contest, a spectacular parade, and miners panning pay dirt in a new gold rush. They got glimpses of a rare turkey-fish from the South Seas; marveled at an odd, elephant-shaped fungus recently discovered in Nebraska; and watched a thrilling undersea battle between two fierce tropical fish.

Already two hundred cameramen are covering big news as it breaks, and more are wanted in every section of the country, according to one news editor.

“There are hundreds of news subjects in each locality waiting for you to photograph,” he tells his contributors. “You must use your ingenuity and manufacture news, stunts, and human-interest subjects.

“If possible, shoot each subject from three different anglesâ€”eye-level; high, or ‘bird’s-eye’ angle; and low, or ‘worm’s-eye’ angle. If all your shots are taken at eye-level, break them up in the following manner: 1â€”Long shot; 2â€”Medium shot; 3â€”Close-up. Close-ups are the most important shots in newsreel work. The public likes to see the action near at hand.

“A tripod is essential, for only in cases of rare and spectacular news eventsâ€”shots that cannot be re-takenâ€”will we accept pictures that are unsteady on the screen. Don’t panoram or tilt unless absolutely necessaryâ€”if, for example, you are following a moving object. Always shoot moving objects at a 45-degree angle, coming into the camera or going away. Remember that hundreds of good newsreel shots have been turned down by editors because of too much panoraming, and unsteady pictures.

One to Fifty Dollars a Foot Another and more fertile field now is opening to the amateur who can do work of professional quality. Twenty-six hundred freelance cameramen, scattered over the world, today are producing pictorial and travel shots for feature pictures. Usually they are equipped with professional camera and sound-recording devices. Their films, when accepted, bring from one to fifty dollars a foot. They are not “spot news,” but pictures that may be used in framing other productionsâ€”atmosphere shots, backgrounds, and mob scenes, to be used in connection with studio-made action. In their libraries, large Hollywood studios have thousands of feet of such material, collected over a period of years for use in feature productions. One cameraman alone has shot 3,000 stills and 150,000 feet of film.

Many amateurs are traveling the globe, bringing home pictures of extreme interest. Some make prints, editing, cutting, and titling them, to distribute among friends. Others have sold them to industrial companies or for visual education purposes, thus making their hobby pay its way.

Many Gadgets Aid Filming The advanced amateur who strives for professional effects, needs to carry a rather bulky kit of auxiliary lenses, filters, meters, and other equipment. One man has equipped his camera with so many accessories that it is virtually a walking laboratory. A homemade “air” viewfinder, built from a square brass tube painted black inside, gives clear, bright images of natural size. Through a tripod socket in its top, the camera can be turned upside down for reverse shots, while jointed tripod heads allow it to be tilted in any plane or rocked from side to side. A permanently-attached light meter gives correct exposure at a glance, while a distance meter, fastened to the finder tube, permits rapid focusing.