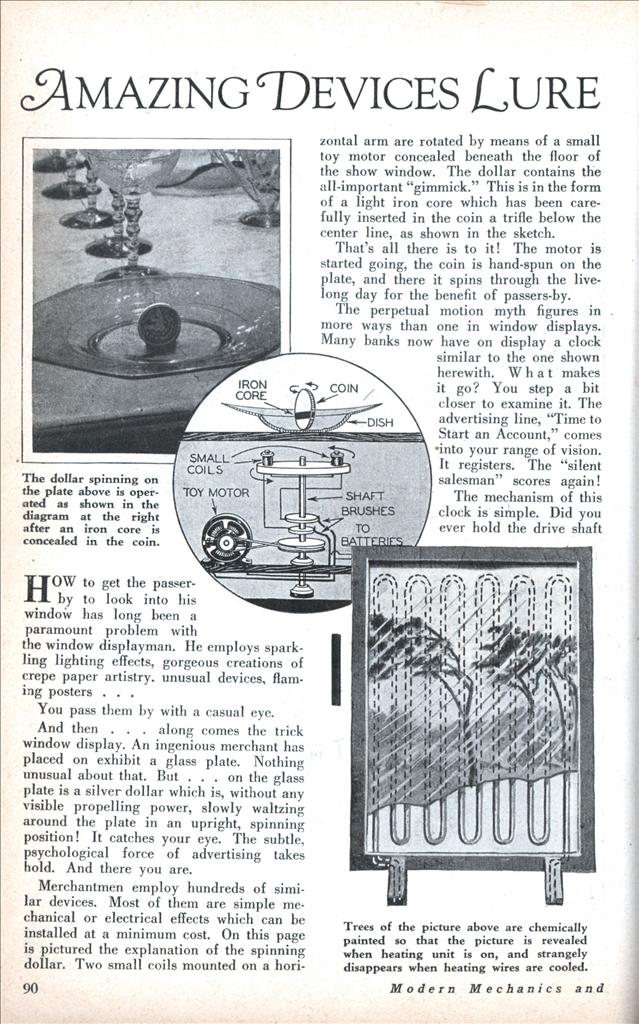 HOW to get the passerby to look into his window has long been a paramount problem with the window displayman. He employs sparkling lighting effects, gorgeous creations of crepe paper artistry, unusual devices, flaming posters . . .

You pass them by with a casual eye.

And then . . . along comes the trick window display. An ingenious merchant has placed on exhibit a glass plate. Nothing unusual about that. But … on the glass plate is a silver dollar which is, without any visible propelling power, slowly waltzing around the plate in an upright, spinning position! It catches your eye. The subtle, psychological force of advertising takes hold. And there you are.

Merchantmen employ hundreds of similar devices. Most of them are simple mechanical or electrical effects which can be installed at a minimum cost. On this page is pictured the explanation of the spinning dollar. Two small coils mounted on a horizontal arm are rotated by means of a small toy motor concealed beneath the floor of the show window. The dollar contains the all-important “gimmick.” This is in the form of a light iron core which has been carefully inserted in the coin a trifle below the center line, as shown in the sketch.

That’s all there is to it! The motor is started going, the coin is hand-spun on the plate, and there it spins through the livelong day for the benefit of passers-by.

The perpetual motion myth figures in more ways than one in window displays. Many banks now have on display a clock similar to the one shown herewith. What makes it go? You step a bit closer to examine it. The advertising line, “Time to Start an Account,” comes â€¢into your range of vision. It registers. The “silent salesman” scores again!

The mechanism of this clock is simple. Did you ever hold the drive shaft of an alarm clock in your hand and let the motor turn the clock around the shaft instead of turning the hands around the clock face? That explains this clock. In the round knob at the end of the minute hand is concealed a small watch with the drive shaft connected to the minute hand of the large clock. A weight in the form of a small compass keeps the small watch in a fixed position, so that its energy is directed towards making the minute hand of the clock rotate. Although simple enough, the principle of the thing is rather difficult to grasp.

Perhaps that explains its popularity !

Many years ago, an ingenious magician invented the “Obedient Ball.” It was merely a ball threaded on a piece of string. The ball would rise and fall at the performer’s command. It was a good trick.

Now the window displayman has adopted it. He inscribes some simple little advertising sign on the ball, threads it on a rope which runs from floor to ceiling in his window, and then starts the ball on its never ending chase from the ceiling to the floor, up and down the rope.

The method is extremely simple. The ball is hollow and contains two wheels, a large one and a small one, as shown herewith. The rope is not one continuous piece, but two separate pieces, one of which (the upper) is wound around the large wheel; the other (lower) the small wheel. Physics does the rest. When the rope is slack, the ball will fall; when the rope is tight, the ball will climb. The slackening and tightening motions are done by means of an eccentric disk which is connected to a low-geared motor above the ceiling of the window.

Among the many unusual and beautiful picture effects which displaymen have created, the Electric Picture still holds forth as the most mysterious. In this display, a colored picture slowly appears on a white sheet of cardboard, and then slowly disappears again at intervals of two minutes.