This is the earliest reference I’ve seen to a CCD in a consumer product. 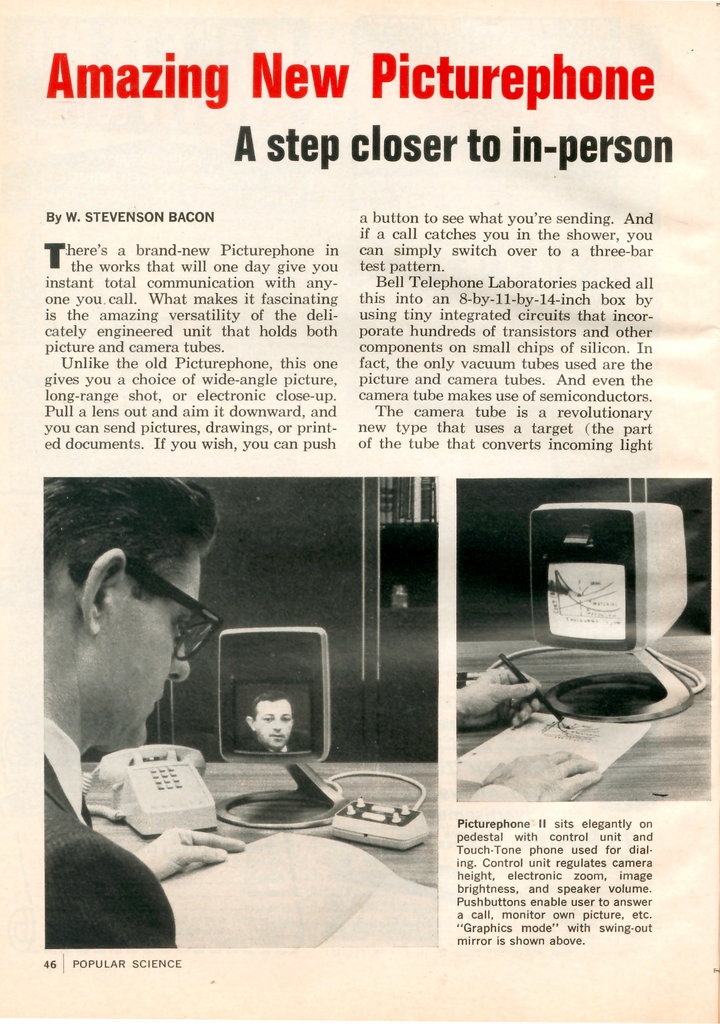 Thereâ€™s a brand-new Picturephone in the works that will one day give you instant total communication with anyone you call. What makes it fascinating is the amazing versatility of the delicately engineered unit that holds both picture and camera tubes.

Unlike the old Picturephone, this one gives you a choice of wide-angle picture, long-range shot, or electronic close-up. Pull a lens out and aim it downward, and you can send pictures, drawings, or printed documents. If you wish, you can push a button to see what youâ€™re sending. And if a call catches you in the shower you can simply switch over to three-bar test pattern.

Bell Telephone Laboratories packed all this into an 8-by-11-by-14-inch box by using tiny integrated circuits that incorporate hundreds of transistors and other components on small chips of silicon. In fact, the only vacuum tubes used are the picture and camera tubes. And even the camera tube makes use of semiconductors.

The camera tube is a revolutionary new type that uses a target (the part of the tube that converts incoming light to electrical charges) made of silicon and containing 300,000 light-sensitive diodes formed on it by integrated circuit techniques. Itâ€™s the first time that semiconductors and vacuum tubes have been combined to make one device.

Advantages, compared to an ordinary TV camera, are enormous. This one takes close-ups electronically. By adjusting a knob, you simply frame off a smaller portion of the target for scanning. It operates over a wide range of light levels and can even be exposed to direct sunlight. Finally, it is not vulnerable to â€œburn-inâ€, the phenomenon that causes a conventional TV camera, focused on one scene for too long a time, to transmit a ghost image later.

With Picturephone II, the user can change freely from side to side while remaining in the picture, or focus the camera to transmit scenes up to 20 feed away. Part of the wide-angle effect is owed to the lens, part to a bigger screen: five by 5-1/2 inches.

When can you have one? Best guesses are that itâ€™ll be 10 to 15 years, although some may go into commercial service in the early 70s.

First tests will be this September between Westinghouse offices in Pittsburgh and New York. The tests will guide further development, looking toward the day when youâ€™ll have a new Picturephone right in your own home.