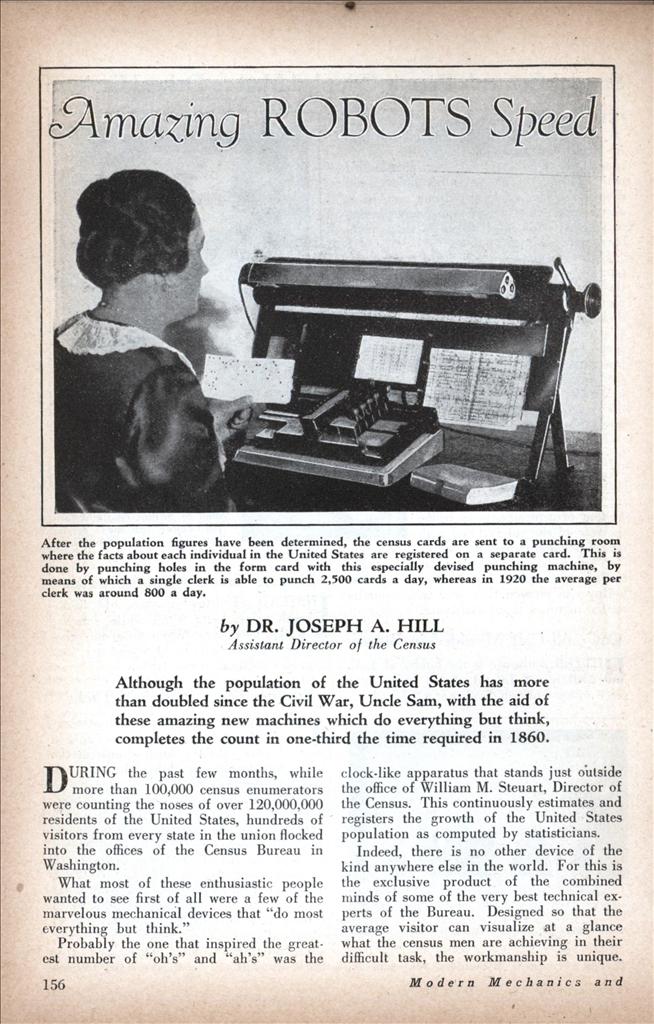 by DR. JOSEPH A. HILL

Assistant Director of the Census Although the population of the United States has more than doubled since the Civil War, Uncle Sam, with the aid of these amazing new machines which do everything but think, completes the count in one-third the time required in 1860.

DURING the past few months, while more than 100,000 census enumerators were counting the noses of over 120,000,000 residents of the United States, hundreds of visitors from every state in the union flocked into the offices of the Census Bureau in Washington.

What most of these enthusiastic people wanted to see first of all were a few of the marvelous mechanical devices that “do most everything but think.”

Probably the one that inspired the greatest number of “oil’s” and “ah’s” was the clock-like apparatus that stands just outside the office of William M. Steuart, Director of the Census. This continuously estimates and registers the growth of the United States population as computed by statisticians.

Indeed, there is no other device of the kind anywhere else in the world. For this is the exclusive product of the combined minds of some of the very best technical experts of the Bureau. Designed so that the average visitor can visualize at a glance what the census men are achieving in their difficult task, the workmanship is unique.

Glance at the accompanying picture and you will gain the correct impression of a great . statistical chart, operated by automatic electrical control.

The large figure at the top represents the population of the United States on the morning of February 18, 1930, the time the photo was taken, and this figure changes continuously, according to the number of births, deaths, arrivals of immigrants and departures of emigrants. Statisticians have computed that there is a birth on an average of every 13 seconds, so that after that passage of time a tiny blue light (see picture) flashes. Similarly, a red light flashes every 23 seconds to denote a death; a green light flashes every 1-1/2 minutes to represent the arrival of a new immigrant into the United States; a red light flashes every 5^2 minutes to denote the departure of an emigrant from this country; while a white light flashes every 23 seconds to represent the net increase of one person to our population total.

You will notice from the picture that underneath the heading “Population Change,” there are two additional rows of lights, the one horizontal, and the other vertical. Every time a birth is recorded a blue light flashes all the way from the topmost bulb in the vertical row, up near the stork, down to the white bulb in the very center. When a death is recorded, then a purple light flashes from the central white light down through the bulbs over Father Time.

Now, when an immigrant is recorded, green lights start flashing from the large boat on the right and move to the central white light; and when an emigrant leaves this country the fact is designated by a red light that starts flashing from the small boat on the left and continues to the white light in the center. The net gain is indicated by a flash from the white light in the center, while simultaneously a gain of one in our population is registered on the large counter at the top.

This automatic recording device is controlled by five motor-driven timing flashes, or switches, somewhat on the order of those utilized in the mammoth electrical sign boards of our metropolitan districts. Every morning at precisely 9 o’clock the apparatus is set up in accordance with latest figures on our estimated population and turned on, later to be turned off at 4:30 o’clock every afternoon.

It would be physically impossible to carry out the mammoth census program of the United States as it has developed during the last century and a half were it not for the aid of intricate machinery used to register, sort and tabulate the information after it is received. If the work’ were attempted by hand, so many clerks and copyists would be needed that they surely would trample over each other trying to work, and the errors probably would be so great that the statistics published would be of little value.

Certainly the machinery being used in compiling and tabulating the data collected in the 1930 census is far more efficient than it was ten years ago. New machines have been developed and old ones improved, so that, notwithstanding the fact that more information has been obtained about each person, and the population of the country has increased 17,000,000 persons during the last decade, the results will be published to the world more quickly and more accurately than in 1920.

The Bureau maintains its own mechanical laboratory, where new machines for tabulating census information continually are being designed and constructed. A new automatic gang-punching machine that has just been developed, for instance, will perform the work done by 10 machines of the type used in 1920, and will do it more accurately. Another machine used this year sorts 140,000 census cards a day—a task that would require the labor of 50 diligent clerks.

When the 100,000 census enumerators collected census information at the front door steps these past few months, the answers to the questions were put down by hand on large blank forms called “schedules,” on which the questions to be asked had been printed. Now, when these schedules reach Washington they are examined painstakingly and an immediate hand count is made of the population of each state, county, city, township and ward in the nation. Whereupon announcements concerning the population of these civil divisions are made at once, based on the count thus obtained.

After the population figures have been determined, the 1930 schedules are sent to a punching room at the Census Bureau, where the facts about each individual in the country are registered on a separate card. This is done by punching holes in a form card with a new and especially devised punching machine, by means “of which a single clerk can punch 2,500 cards a day, whereas in 1920 the average per clerk was around only 800 a day.

The first four holes punched in each card register the state, county, city and ward in which the person lives. For all the rural districts the township or other minor civil division is shown. In all the cards from the same enumeration district the first four holes are punched alike, since all the people live in the same township, ward, and so on.

The second sorting is according to color. Each sex is now separated into whites, blacks, Indians, Mexicans and Hawaiians. All other races, such as Turks, Persians, Afghans, or Malaysians, are classed as “other colors.”

The third time the cards are run through the sorting machine they are separated according to nativity. Each group of cards, those for Japanese males, white females, Mexican males, and so on, are sorted according to whether the person was born in the United States or abroad, whether both parents are native-born, or whether one is native and one foreign-born.

All the cards for the entire nation are run through the sorting machines three times to separate them according to sex, race and nativity. Afterwards, special sortings according to age, occupation, citizenship, or other items of information are made for certain classes of the population, or if desired, for the country as a whole.

The third and most important mechanical process is to tabulate the information contained on the cards. A combination adding and tabulating machine, by far the most delicate and complicated mechanism used in all census work, has been perfected to the point where it can count and register 59 combinations of facts each time the cards are handled.

The second mechanical process, after the cards are punched, is to sort them, according to age, sex, or whatever is desired. A sorting machine, an apparatus with uncanny fingers which run across the cards to find where the holes have been punched, separates the cards into the desired groups according to a particular class of information. For instance, if the Bureau wanted to find out how many native-born Chinese women there were in the United States, the machine could be set so that it would separate the cards for such persons.