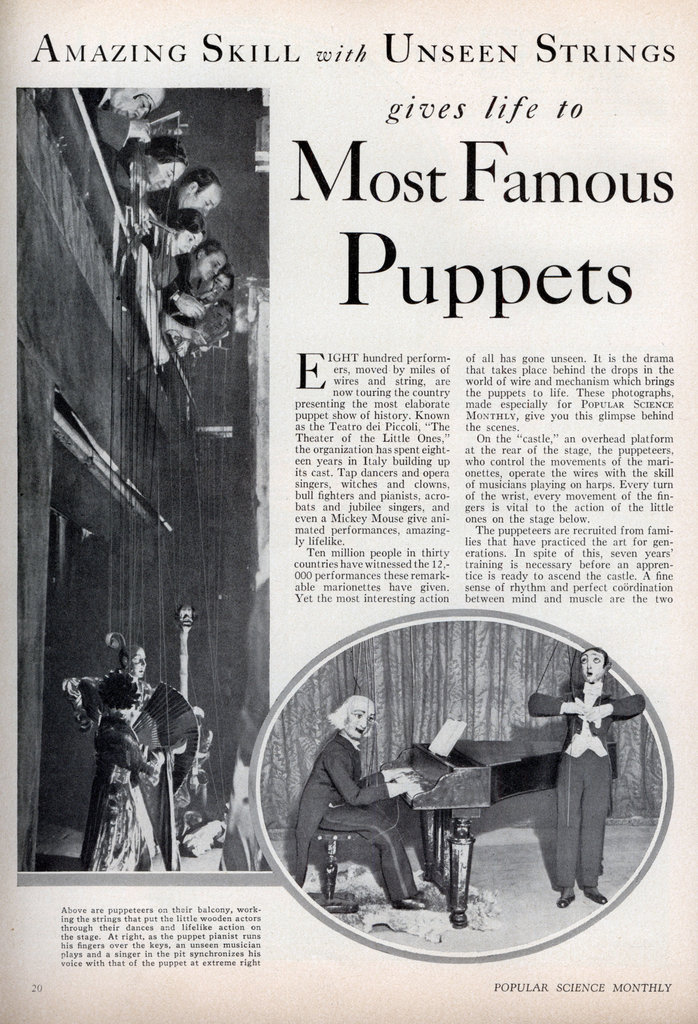 EIGHT hundred performers, moved by miles of wires and string, are now touring the country presenting the most elaborate puppet show of history. Known as the Teatro dei Piccoli, “The Theater of the Little Ones,” the organization has spent eighteen years in Italy building up its cast. Tap dancers and opera singers, witches and clowns, , bull fighters and pianists, acrobats and jubilee singers, and even a Mickey Mouse give animated performances, amazingly lifelike.

Ten million people in thirty countries have witnessed the 12,000 performances these remarkable marionettes have given. Yet the most interesting action of all has gone unseen. It is the drama that takes place behind the drops in the world of wire and mechanism which brings the puppets to life. These photographs, made especially for Popular Science Monthly, give you this glimpse behind the scenes.

On the “castle,” an overhead platform at the rear of the stage, the puppeteers, who control the movements of the marionettes, operate the wires with the skill of musicians playing on harps. Every turn of the wrist, every movement of the fingers is vital to the action of the little ones on the stage below.

The puppeteers are recruited from families that have practiced the art for generations. In spite of this, seven years’ training is necessary before an apprentice is ready to ascend the castle. A fine sense of rhythm and perfect coordination between mind and muscle are the two prime requisites for the work. Sometimes, four men are required to handle the wires of a single figure and their movements must be perfectly synchronized to make the actions of the puppet smooth and flowing.

Eighteen miles of wire and string are used in giving life to the 800 wooden actors in the cast. The number of wires attached to the figures range from three to thirty. In some performances, as many as twenty puppeteers are working on the castle platform at the same time and yet not a single wire of the apparently tangled maze is crossed.

The nervous system of each marionette is formed by cords or wires attached to two wooden handles that are held in the hands of the operator. One handle is shaped like a cross. It is held in the left hand and governs the position and maintains the equilibrium of the puppet. The other handle is simply a straight piece of wood. It is rocked back and forth in the right hand or lifted and dropped slightly to give motion to the arms and legs of the marionette.

In some cases, such as in the presentation of a dance by a troupe of chorus girls, a dozen figures are connected with wires so they all move in unison. One operator is all that is required to keep them dancing. He holds two wires like reins and pulls first one and then the other to keep the troupe in motion.

During the performance, the puppeteers lean over a bench-like railing at the edge of the castle platform, nine feet above the stage, wearing special padded leather aprons to act as cushions between their bodies and the hard wood. Often they become so engrossed in the action of the little figures below that they open their mouths when the puppets sing, tremble all over when an acrobat strains to perform a difficult feat, and clench their jaws as the little marionettes rush into battle.

At the same time, trained human singers and actors, hidden in the orchestra pit, speak the words and sing the songs that seem to come from the moving figures on the stage. Altogether, nearly thirty people are required to give the puppets sound and motion.

The 300 stage settings are designed for rapid shifting. The transition from one background to another is accomplished while a few bars of music are played by the orchestra. When puppet crowds are needed in a scene, special preparations are made. Rows of the little actors are hung in the wings. All of the operators except one climb to the top of the platform. Then, the one left below unhooks the puppets one after the other with catlike agility and swings them over to the stage at just the right moment.

Thus one figure after another moves out from the wings as the puppeteers above walk slowly along the platform to their proper places. Some of the marionettes are hung from hooks and in this way allowed to stand motionless in the background on the stage. But the majority are kept slightly in motion, swaying realistically or taking a step now and then, while the principals carry on the action of the play.

Perfect manipulation of the complicated equipment is needed to prevent tangling of the wires. Sometimes as much as two years are spent rehearsing a feature before it is incorporated in the show and presented to the public. One of the most famous scenes on the repertoire, which includes everything from grand opera to black-face comedy, demands almost as delicate handling of the wires as is required of a violinist fingering the strings of his instrument. It shows a pianist tossing his hair and hammering the keys as he accompanies a quartette of vocalists giving a song recital with appropriate gestures.

Each marionette is about four feet tall. The form of the body depends upon the part the puppet is to play. One has a solid trunk and unbending legs; another joints at the waist, shoulders, knees and ankles. Acrobats sometimes have arms and legs which, unseen by the audience, detach themselves and reattach themselves automatically to enable the wooden athletes to perform difficult contortions. The wires hooked to the various parts of the figures must be frequently adjusted to insure just the right tension.

Expert sculptors carve the heads of the marionettes. Each puppet is given features to fit the role it plays in the performance and the faces are painted to give realistic expressions. Hinged jaws allow the mouths to open and close in synchronization with the words spoken by the invisible actors in the pit.

While most of the heads are carved from wood, some are made of plastic material and a few are built up of squares of silk pasted one on top of the other until the desired shape is achieved. To provide for emergencies, an elaborate “hospital” equipment is carried together with more than a ton of extra heads, legs, arms, cloth, and wire. Expert doll surgeons make rapid repairs upon injured actors while the company is on tour. When the troupe of marionettes moves from one city to another, a hundred packing cases are required to hold the equipment, the little actors, and their specially-designed costumes. Each puppet is packed in its own cloth bag. Each wig and head goes in its individual container. And the costumes for the 800 members of the cast travel in large cases of special construction.

Vittorio Podrecca, the organizer of “The Theater of the Little Ones,” began assembling this amazing company of puppets in 1916. Since then, he has taken his troupe of animated dolls around the world. During the present tour, they will visit the main cities of the United States.