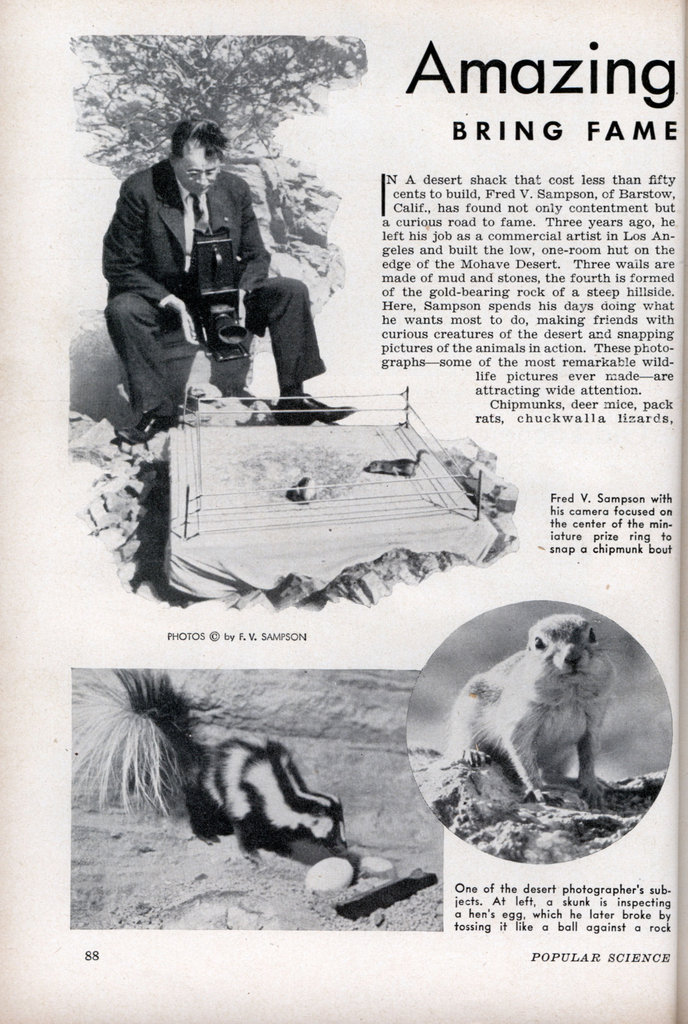 IN A desert shack that cost less than fifty cents to build, Fred V. Sampson, of Barstow, Calif., has found not only contentment but a curious road to fame. Three years ago, he left his job as a commercial artist in Los Angeles and built the low, one-room hut on the edge of the Mohave Desert. Three wails are made of mud and stones, the fourth is formed of the gold-bearing rock of a steep hillside. Here, Sampson spends his days doing what he wants most to do, making friends with curious creatures of the desert and snapping pictures of the animals in action. These photographsâ€”some of the most remarkable wildlife pictures ever madeâ€”are attracting wide attention.

Chipmunks, deer mice, pack rats, chuckwalla lizards, skunks, jack rabbits, and other humble creatures of the bleak region come fearlessly to Sampson’s door and perform before his camera. Near the shack, “NO HUNTING” signs bear the following words: ”The animals near this ridge have been tamed so they may be photographed.

You are welcome to use your camera but kindly do not use guns or otherwise cause the animals to fear you.” The only time Sampson uses a gun himself is to shoot hawks, wildcats, and rattlesnakes that prey on his desert friends. So tame have some of the rabbits and chipmunks become that he can fire directly over them without frightening them away.

At sunrise, every morning, Sampson is out sprinkling grain and other food about the shack to attract the animals. Of all the creatures that come within range of his camera, the little striped chipmunks are his most lively subjects. They have provided the action for some of his most striking pictures.

When he noticed that they often stood up on their hind legs and pushed and cuffed each other in scuffles over the scattered grain, Sampson built a miniature boxing arena in which they could perform. After he has placed grain inside the ropes, he focuses his camera on the center of the ring and waits for the fight to begin. Soon, two of the “squatties,” as he calls the desert rodents, begin squabbling over the food. They rear up, slap, spar, feint, while Sampson follows their movements on the ground glass of his reflex camera. Using split-second exposures, he records the various stages of the battle.

Some days, he will shoot half a dozen pictures in as many minutes; other days, he will sit for hours and not get a snapshot. But when this nature photographer trips the shutter he often records pictures such as have never been taken before. Sometimes, the result is a surprise even to him. Once, for example, he snapped the shutter just as two long-eared jack rabbits faced each other across a bunch of carrots. When he developed the negative, he discovered that two chipmunks he had not seen had moved into the scene below the rabbits and were squared off for a battle. Some of the little rodents have become so friendly that they will wag their tails like dogs when Sampson approaches.

While he is taking his pictures, the desert photographer is careful to make no quick movements. He warns his subjects when he plans to change his position and they seem to understand the inflections of his voice. Sometimes, he has to trick timid creatures into assuming the poses he wants. For example, when he discovered that three deer mice were visiting his shack late at night, he sprinkled grain on a narrow ledge over the stove and focused his camera on the spot. About midnight, when the three rodents were in single file on a ledge, he set off a flash and got the picture.

Two of Sampson’s oddest visitors are a pair of skunks. They have become so much at home in the shack that sometimes he has to put them out because their scuffling under the bed keeps him awake! One midnight, he was awakened by a noise among the rafters overhead. Peering upward, he saw two gleaming eyes in the dark. With his rifle aimed between the glowing eyeballs, he pulled the trigger and a dead wildcat fell to the floor. Another time, he awoke suddenly to find a skunk combing his hair with its forepaws.

To learn how a skunk sucks an egg, Sampson recently gave one of the animals a hen’s egg and, with camera ready, waited to see what would happen. The animal bent down, grasped the egg in its forepaws and, just as a football center passes the pigskin to the quarterback, tossed it back against a rock and smashed the shell. Then, it calmly licked up the white and yolk like a cat lapping up cream!