You wouldn’t think that an article about rubber band tricks would be offensive, but on the second page (second paragraph) there is a trick called “nigger in the wood pile”. 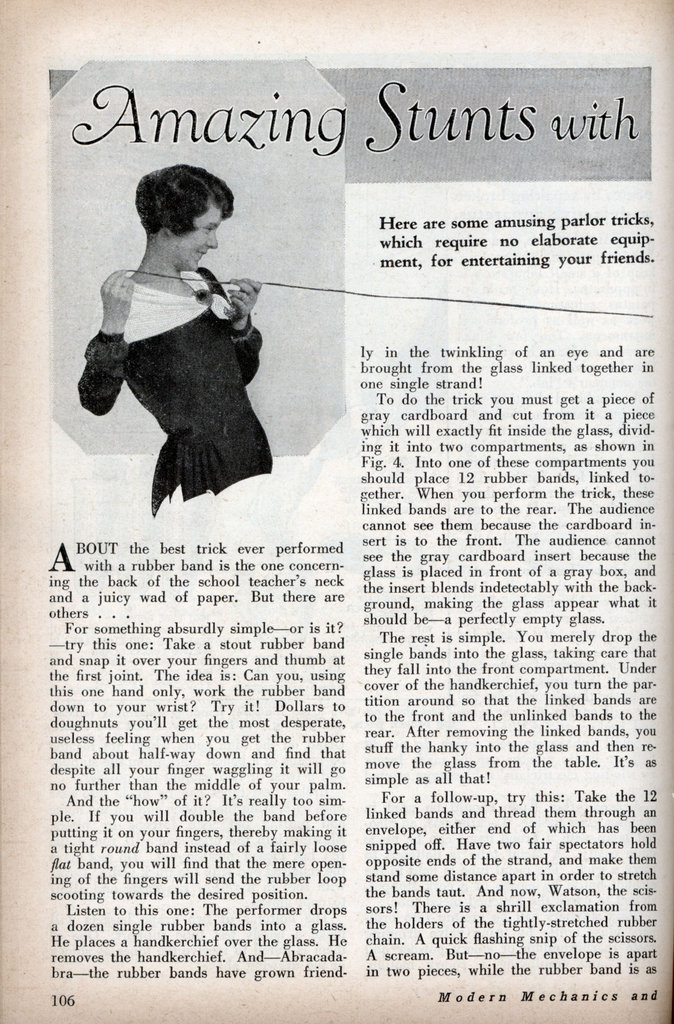 Here are some amusing parlor tricks, which require no elaborate equipment, for entertaining your friends.

ABOUT the best trick ever performed with a rubber band is the one concerning the back of the school teacher’s neck and a juicy wad of paper. But there are others . . .

For something absurdly simpleâ€”or is it? â€”try this one: Take a stout rubber band and snap it over your fingers and thumb at the first joint. The idea is: Can you, using this one hand only, work the rubber band down to your wrist? Try it! Dollars to doughnuts you’ll get the most desperate, useless feeling when you get the rubber band about half-way down and find that despite all your finger waggling it will go no further than the middle of your palm.

And the “how” of it? It’s really too simple. If you will double the band before putting it on your fingers, thereby making it a tight round band instead of a fairly loose flat band, you will find that the mere opening of the fingers will send the rubber loop scooting towards the desired position.

Listen to this one: The performer drops a dozen single rubber bands into a glass. He places a handkerchief over the glass. He removes the handkerchief. Andâ€”Abracadabraâ€”the rubber bands have grown friendly in the twinkling of an eye and are brought from the glass linked together in one single strand!

To do the trick you must get a piece of gray cardboard and cut from it a piece which will exactly fit inside the glass, dividing it into two compartments, as shown in Fig. 4. Into one of these compartments you should place 12 rubber bands, linked together. When you perform the trick, these linked bands are to the rear. The audience cannot see them because the cardboard insert is to the front. The audience cannot see the gray cardboard insert because the glass is placed in front of a gray box, and the insert blends indetectably with the background, making the glass appear what it should beâ€”a perfectly empty glass.

For a follow-up, try this: Take the 12 linked bands and thread them through an envelope, either end of which has been snipped off. Have two fair spectators hold opposite ends of the strand, and make them stand some distance apart in order to stretch the bands taut. And now, Watson, the scissors! There is a shrill exclamation from the holders of the tightly-stretched rubber chain. A quick flashing snip of the scissors. A scream. Butâ€”noâ€”the envelope is apart in two pieces, while the rubber band is as good as everâ€”tautly stretched between two startled young ladies.

The “nigger in the woodpile” has to do with the envelope. This has been previously cut across the back, as indicated by the heavy black line in the picture on this page. The back of the envelope is held away from the audience so that they never suspect the existence of this secret cut. Now, in getting ready to make the cut, the performer secretly slips the lower point of the scissors up through this slit and catches the rubber band, as shown in the circle.

And there you are!

The envelope can now be cut in two, screams regardless, for the rubber band is safely out of the wayâ€” on the back of the scissors.

Something else: The performer exhibits a deck of cards encircled with a rubber band. He shows the face card to be the ace of hearts. He tosses the deck into the air. And â€”mirabile dictuâ€”when the pack is exhibited again, the face card has changed from red to black, the five of clubs now being to the front! It’s all in the rubber band. In the first place, the band is snapped over the deck crosswise, as shown in Fig. 1, on the next page. Then, the performer gives about one-half of the deck a complete turn, as in Fig. 2, and then folds the top half to the under side of the pack, book fashion, as pictured in Fig. 3. The pack is squared up and the face card is shown to the spectators. That’s all there is to it! If the deck is tossed into the air, the rubber band will initiate some fancy unwinding and the top card will be changed by the time the deck has descended.

The next one sounds rather complicated: The performer exhibits two rubber bands, one red, the other black. He places the red band into an envelope; the black band into another envelope. He seals both envelopes. The magician then requests a pencil to mark the envelopes “black” or “red” according to which color rubber band each contains. In the meantime, however, the envelopes have become mixed so that it is necessary to open ‘ one in order to make certain the proper labeling of each. The rubber bandâ€”let’s say the red oneâ€”is removed from the torn envelope and resealed in another envelope which is shown to be empty. This envelope is marked “Red;” the other, of course, is the “Black” one. The whole stunt is simply this: The rubber bands change placesâ€”the black band is found in the “Red” envelope, and the red band is found in the “Black” envelope.

How is it done? More tricky envelopes. In this case you must cut from two envelopes the front portion including the gummed flap. This “half envelope” is then slipped into another envelope and a red rubber band is placed between the two flaps. The gummed edges are stuck together, making the envelope appear to be quite ordinary and empty. A second envelope is prepared, this one housing a black rubber band.

And that’s the trick finished. You give the “Red” envelope to a spectator; you retain the “Black” envelope. In opening your envelope, you do so by tearing the end, and removing the concealed red rubber band. The spectator may open his envelope in any manner he desires. Try it! It’s really not at all as complicated as it sounds.

Here’s a “chestnut”â€”old as your Aunt Maggie â€” but good entertainment regardless. The performer exhibits his good left fist. A rubber band is seen encircling the first and second fingers. The performer opens his hand. Yep, it’s the famous acrobatic rubber band. It is now on the third and fourth fingers, having made its famous leap for life and glory.

It’s absurdly simple. Like this: Place the band- -a fairly tight one, over your first and second fingers. Now, pull the band away from the inside of the hand, as in the drawing on the left, and insert the tips of the four fingers into the loop, as in the left of the circle. Turn your fist back up and exhibit the band to a spectator, as at the top of the page. When you open your fingers, the band at once jumps from first and second to third and fourâ€”four speeds forward, as it wereâ€”and the spectators are greatly puzzled. Maybe!

About the best stunt ever performed with a rubber band is the one concerning the back of the school teacher’s neck and a juicy wad of paper. You take a wide band and place it over the outstretched first and second fingers of your left hand. Then you place the spitball . . . But say, you probably know that one better than I do!