This article is incomplete. It does not continue on page 188. In fact I looked on every page of the magazine, and the ending is nowhere to be found. Oh well. 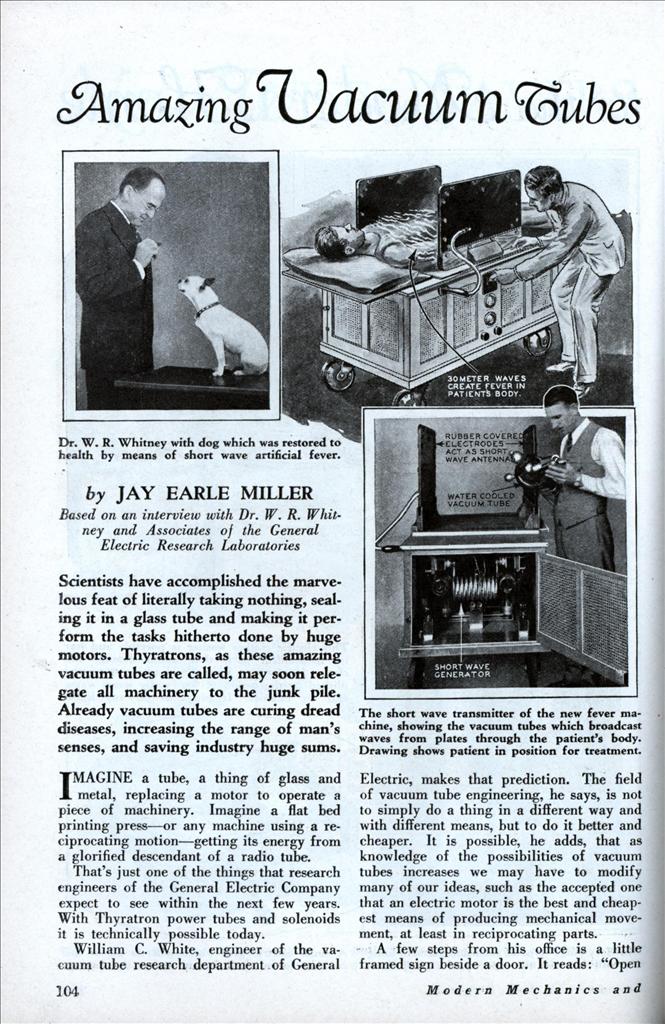 Based on an interview with Dr. W. R. Whitney and Associates of the General Electric Research Laboratories Scientists have accomplished the marvelous feat of literally taking nothing, sealing it in a glass tube and making it perform the tasks hitherto done by huge motors. Thyratrons, as these amazing vacuum tubes are called, may soon relegate all machinery to the junk pile. Already vacuum tubes are curing dread diseases, increasing the range of man’s senses, and saving industry huge sums.

IMAGINE a tube, a thing of glass and metal, replacing a motor to operate a piece of machinery. Imagine a fiat bed printing press—or any machine using a reciprocating motion-—getting its energy from a glorified descendant of a radio tube.

That’s just one of the things that research engineers of the General Electric Company expect to see within the next few years. With Thyratron power tubes and solenoids it is technically possible today.

William C. White, engineer of the vacuum tube research department of General Electric, makes that prediction. The field of vacuum tube engineering, he says, is not to simply do a thing in a different way and with different means, but to do it better and cheaper. It is possible, he adds, that as knowledge of the possibilities of vacuum tubes increases we may have to modify many of our ideas, such as the accepted one that an electric motor is the best and cheapest means of producing mechanical movement, at least in reciprocating parts.

A few steps from his office is a little framed sign beside a door. It reads: “Open locks, whoever knocks”—a quotation from Shakespeare. Beneath is a small bronze plaque with the monogram of “G. E.” A guide taps twice on the plaque, pauses, taps seven times more. The door silently swings open. As the visitor steps over the threshold a talking machine whirs into motion and calls a greeting. All around the room are ranged exhibits of electrical apparatus. As you pause in front of each it automatically starts, and stops as you walk away. A pair of Thyratron tubes are the switches that intercept the code signals tapped on the plaque and start the door-opening mechanism. Light beams falling on photoelectric cells are interrupted as you stop in front of an exhibit, and the interrupted current releases the energy of more Thyratrons to start the machinery working.

The suffix “tron” applied to a long line of tubes from the first high voltage radio valve, means an object that is used as an instrument or tool. And the prefix “thyra” comes from another Greek word meaning door, or gateway.

And that’s just what a Thyratron is, for it will convert direct current into alternating, or invert alternating current into direct As a valve it can replace switches, current breakers or lightning arresters. It can change current of one frequency into another, or pick out any particular portion of an electrical wave and put it to work. It can control any form of electrical apparatus, operate burglar alarms and do other forms of work. And it may even, as Mr. White predicts, displace electrical motors.

The Thyratron is really a mercury vapor arc switch controlled by changing the grid current in the tube. Its ability to convert direct current into alternating and invert alternating current into direct opens up a vast field of incalculable value. It may make possible the transmission of superpower over long distances an economical possibility, and so help solve the problem of getting hydro-electric energy from distant water power sites to cities where it is needed, or the burning of coal at the mines and transmission of its energy as electrical power.

Long distance transmission has not been practical because it is cheaper and easier to generate alternating current, but the losses in the transmission of alternating energy are prohibitive over distances of more than a couple of hundred miles. Direct current, on the other hand, can be transmitted with only nominal losses, but costs more for generating equipment, and is less adaptable for economical distribution and use in the city.

Five hundred people are working at the research laboratories at Schenectady under the direction of Dr. Willis R. Whitney, in the oldest great research institution in America. When Dr. Whitney left Massachusetts Institute of Technology in 1900 to establish the research department of General Electric he was the whole department. His method has been unique. At Schenectady they do not say that Dr. Coolidge, or Dr. Langmuir, or Dr. Alexanderson, or any of the other famous men who have made Schenectady famous is “working” on this or that. They say he is “playing” with it. Outside Dr. Whitney’s office is a sign reading “Come in, Rain or Shine.” Everybody is welcome, and the chief is never too busy to drop whatever he is doing and talk over things with the workers.

Dr. Irving Langmuir, when he left Stevens Institute in 1909 to join Dr. Whitney’s organization, was told to look around and see what interested him most. He saw some experiments in drawing tungsten wire for lamp filaments under a process developed by Dr. Coolidge, and suggested the difficulties experienced might be due to impurities resulting from gases in the wire.
That led him to experiment with gases, and for several years, he recalls, “While I was having a good time satisfying my curiosity and publishing scientific papers I frequently wondered whether it was fair that I should spend my whole time in an industrial organization on such purely scientific work.”

Today they show you a laboratory work table at Schenectady which probably did not cost $50C to build and equip. On that table Dr. Langmuir produced the Mazda C, or gas-filled incandescent light, which annually saves the public millions of dollars in lighting bills, the high-vacuum power tube which made radio broadcasting possible, the thoriated filament for tubes, and atomic-hydrogen welding, among other things.

The way in which research in pure science produces useful by-products for industry has been demonstrated many times at Schenectady. One of the most recent is the development of an artificial fever producer for hospital use. Fever, as doctors have come to know, is not necessarily a symptom of disease, but nature’s method of combatting it. By producing fever it is possible to cure some diseases. In at least one form of insanity cures have been effected with high fevers by letting malaria mosquitoes bite the patient, and then curing the malaria.

A few years ago the research engineers were experimenting with short-wave radio, using considerable power of exceptionally short waves. They discovered that the workers in the apparatus room developed symptoms of fever when waves of less than thirty meters were being used.

The result of that chance discovery was the production of a high frequency heater, or fever machine, which is being used experimentally in various hospitals. Essenti-