Given all the steps involved, twelve minutes to set up a call doesn’t seem that long. I wonder what the call cost.

It’s kind of amazing to think that my iPhone has far more capacity than the entire “overseas” telephone network had at this time. 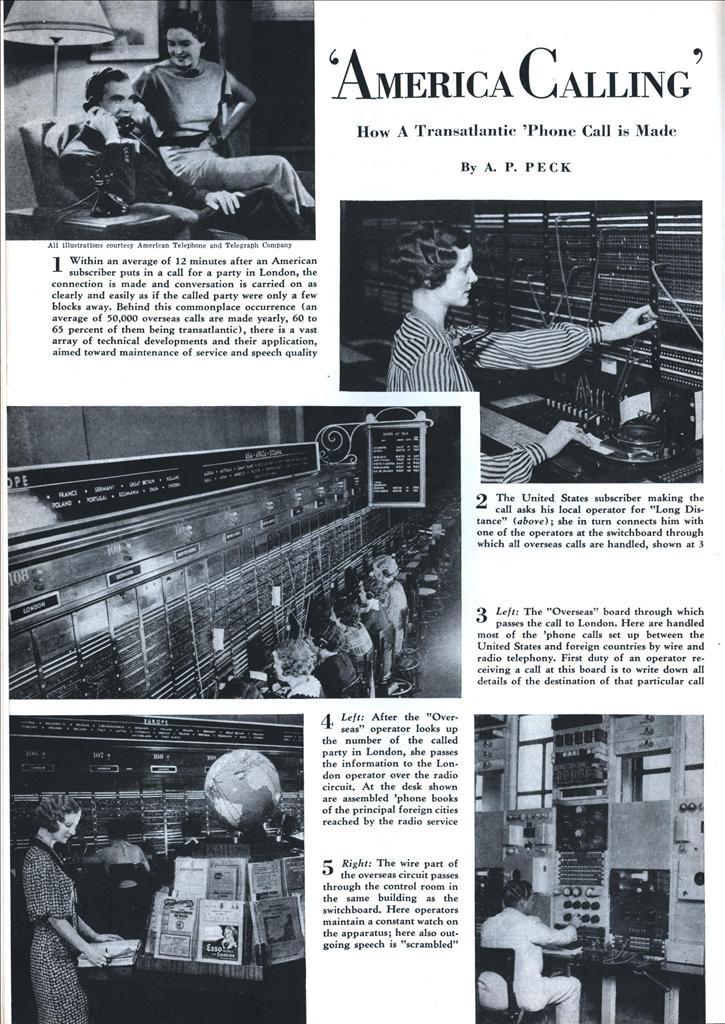 How A Transatlantic ‘Phone Call is Made

1. Within an average of 12 minutes after an American subscriber puts in a call for a party in London, the connection is made and conversation is carried on as clearly and easily as if the called party were only a few blocks away. Behind this commonplace occurrence (an average of 50,000 overseas calls are made yearly, 60 to 65 percent of them being transatlantic), there is a vast array of technical developments and their application, aimed toward maintenance of service and speech quality.

2. The United States subscriber making the call asks his local operator for “Long Distance” (above); she in turn connects him with one of the operators at the switchboard through which all overseas calls are handled, shown at 3.

3. Left: The “Overseas” board through which passes the call to London. Here are handled most of the ‘phone calls set up between the United States and foreign countries by wire and radio telephony. First duty of an operator receiving a call at this board is to write down all details of the destination of that particular call.

4. Left: After the “Over-seas” operator looks up the number of the called party in London, she passes the information to the London operator over the radio circuit. At the desk shown are assembled ‘phone books of the principal foreign cities reached by the radio service.

5. Right: The wire part of the overseas circuit passes through the control room in the same building as the switchboard. Here operators maintain a constant watch on the apparatus; here also outgoing speech is “scrambled”.

6. To insure privacy of overseas telephony, speech is “scrambled,” or inverted in frequency; anyone listening in with a radio receiver would hear sounds resembling almost anything but coherent speech. The above drawing, fanciful in its execution, shows briefly what happens. The voice frequencies of “America calling” are scrambled to sound something like “on oy ikau ki yung”; they are unscrambled when they reach the receiver.

7. From the control room shown at 5, a wire line carries the voice of the speaker to a short-wave transmitting station at Lawrenceville, New Jersey (above), whence it is hurled across the Atlantic by a directive radio antenna system, picked up at a receiving station near London, and sent on its way once more by wire.

8. Left: The radio control room in the London Trunk Exchange, where the voice from the United States is unscrambled. Here also operators keep check on the functioning of all associated apparatus, and control the volume of current passing through the circuit so that transmitted speech will at all times be within the easily audible range—neither too loud nor too low for perfect understanding.

9. From the radio control room the incoming voice is passed by wire to the International Exchange in the same building, whence it is routed through the local telephone exchange system and finally reaches the party being called.

10. Right: The call is completed. Quickly and without hitch, two parties on opposite sides of the Atlantic have been connected by wire and radio, an accomplishment made possible by the findings of intensive scientific research.