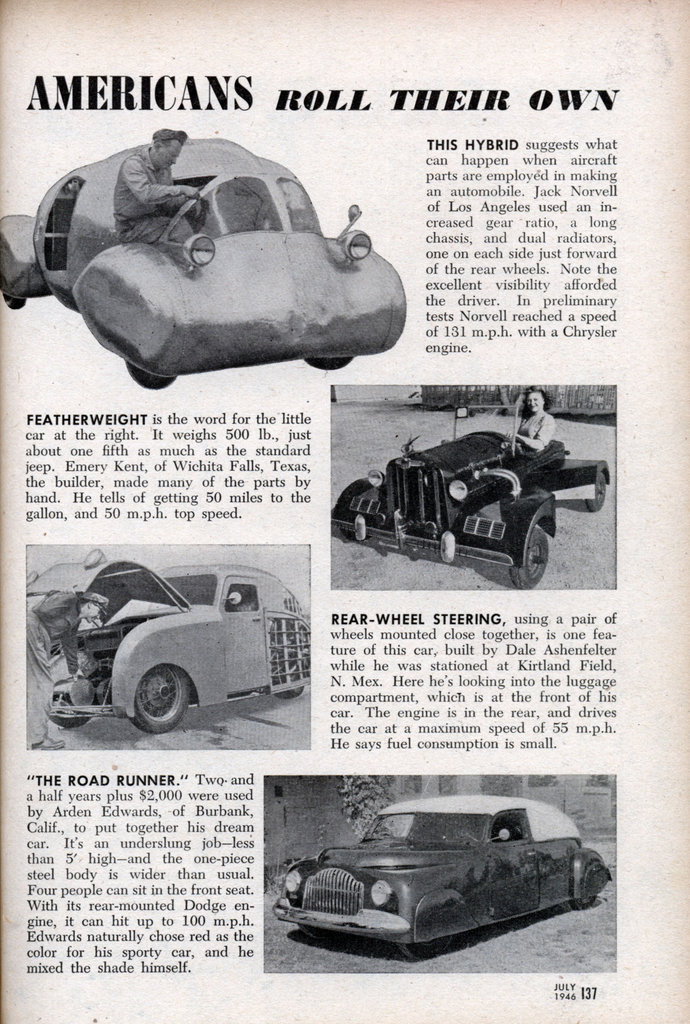 Americans Roll Their Own

THIS HYBRID suggests what can happen when aircraft parts are employed in making an automobile. Jack Norvell of Los Angeles used an increased gear ratio, a long chassis, and dual radiators, one on each side just forward of the rear wheels. Note the excellent visibility afforded the driver. In preliminary tests Norvell reached a speed of 131 m.p.h, with a Chrysler engine.

FEATHERWEIGHT is the word for the little car at the right. It weighs 500 lb., just about one fifth as much as the standard jeep. Emery Kent, of Wichita Falls, Texas, the builder, made many of the parts by hand. He tells of getting 50 miles to the gallon, and 50 m.p.h, top speed.

REAR-WHEEL STEERING, using a pair of wheels mounted close together, is one feature of this car, built by Dale Ashenfelter while he was stationed at Kirtland Field, N. Mex. Here he’s looking into the luggage compartment, which is at the front of his car. The engine is in the rear, and drives the car at a maximum speed of 55 m.p.h. He says fuel consumption is small.

“THE ROAD RUNNER.” Two and a half years plus $2,000 were used by Arden Edwards, of Burbank, Calif., to put together his dream car. It’s an underslung jobâ€”less than 5′ highâ€”and the one-piece steel body is wider than usual. Four people can sit in the front seat. With its rear-mounted Dodge engine, it can hit up to 100 m.p.h. Edwards naturally chose red as the color for his sporty car, and he mixed the shade himself.