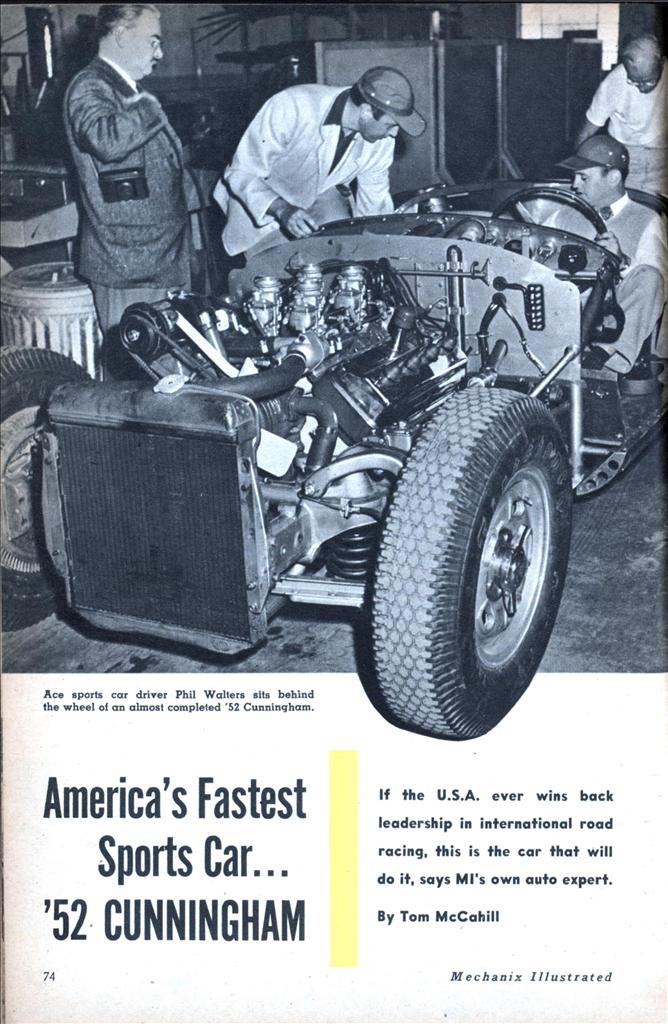 If the U.S.A. ever wins back leadership in international road racing, this is the car that will do it, says Mi’s own auto expert.

THE 1952 Cunninghams have four wheels and a base Chrysler block but aside from this they look no more like the 1951 models than I resemble Fred Astaire on a ballroom floor. The first cars came in for a lot of hard criticism because of their unfortunate showing in the 24-hour race at Le Mans a year ago. But before the year was out, they succeeded in cramming a crankcase full of words down the critics’, throats by running away with the Elkhart Lake and Watkins Glen races. In finishing one, two and four at Watkins Glen, even the sourest observer was forced to admit that they were about the hottest cars ever to run on these shores. And this year the Cunningham is even hotter.

The big pay-off difference, however, is in the weight. Last year the Cunningham without extra tools, parts or fuel weighed approximately 3,400 pounds. This year in the same condition it hits the scales at 2,410, or nearly 1,000 pounds less! It doesn’t take a Pinin Farina or a Ferrari to see why, comparing weight, overall dimensions and added power between the two automobiles, this 1952 Cunningham figured on the morning line to be the car to beat in the big international grind in France on June 14-15.

The 1951 Cunninghams were a long way from perfect in many respects and no one was quicker to admit it than Briggs S. Cunningham himself, their creator and America’s number one sports car backer. With the necessary equipment to run at Le Mans last year’s cars weighed almost 4,000 pounds. They steered badly and none of the three racing entries had even 1,000 miles of break-in running before the race. In spite of this, at the 20th hour of the 24, Phil Walters and John Fitch had their Cunningham in second place, averaging close to 90 mph and doing as much as 153 on the straightaways. A bearing failure, due to excessive heat from detonation caused by the unexpectedly poor official fuel, finally kayoed its good chance of winning and the car limped across the finish line in 18th place at the end of the 24-hour classic. The other two Cunninghams spun out early in the torrential rain that made the turns as slimy as an eel’s belly.

It would have been a lead-pipe cinch to correct the minor steering faults, shave off several hundred pounds of weight and re-enter the same models this year. Many manufacturers would have done just that but Cunningham doesn’t work that way. He was the one who told me that the Jaguar XK 120C (last year’s winner) was just too hot for his current model. The XK 120C had a lot more acceleration and a top speed of close to 160 mph. Because of this, Cunningham figured this year there would be at least a dozen new entries that could top 160 mph, including the new Mercedes team and the Ferraris. Therefore, to make any showing at all meant building an entirely new car from stem to stern and that’s exactly what he did.

The three Cunninghams in the Le Mans race this year, as last, will he powered by base Chrysler V8 engines. After months of experimentation, the new engines developed close to 325 horsepower on the dynamometer as against less than 300 last year. Two of the new entries will be roadsters, as in 1951, and judging from early tests which I witnessed 170 miles an hour seems a conservative estimate of their top speed. They should accelerate from zero to 60 in 6.5 seconds, which is truly spectacular.

The real ring-tailed dilly of the 1952 Cunningham entry, however, is the two-passenger hardtop competition coupe that will be driven by the team’s best drivers. This job was redesigned in my presence by Dr. W.I.E. Kamm, the famed German design engineer of Mercedes and Auto Union, and it has me completely up the well-known tree. Dr. Kamm came to Cunningham’s factory last winter, armed with more charts and graphs on streamlining, based on actual wind tunnel tests, than you could cram into a good-sized truck. At the Cunningham engineering conference, to which I was fortunate enough to be invited, all present stayed with the Doctor for a while in following his elaborate charts. But when he got into the uppermost stratosphere of mathematics, we all dropped off one by one.

A hardtop competition coupe was in the 1952 Cunningham scheme before Dr. Kamm arrived and a clay model had already been completed. This job was similar to the conventional competition hardtop design used by Ferrari, Porsche and others but when Doc Kamm saw it he turned thumbs down and started reworking the clay immediately. The final result is a coupe with an almost flat station wagon back! The rear fenders are drawn out and the whole roof line is a beautiful upside-down, canoe-like piece of streamlining, until you come to the rear roof line. Here it plunges down like the tail end of a truck. Actually, this flat rear section is no bigger in area than the broad side of a portable typewriter case but all of us, except Dr. Kamm, had believed that a flat rear section would create an extreme high pressure area at speeds. This is where Dr. Kamm lost us, in his graphs. According to him the rear design of the fenders, and the general body contour from the windshield on back, will eliminate any retarding high pressure area at the stern. He showed us graph after graph bearing this out but, as I have already mentioned, they were too deep for any of us to follow more than vaguely so he had the ball all the way.

But here’s what impressed us about the Doctor’s mathematics. Unsheathing one of his graphs, he studied the frontal area and general shape of the new roadsters and predicted that with 300 horsepower (which the Cunninghams were then topping on the dynamometer) the roadster should have a top speed of just about 170 mph. This was so close to accurate that when he told us how fast the coupe would go we could hardly argue. Dr. Kamm stated that the coupe, with 300 horsepower, should be able to reach 220 miles an hour, or 50 miles an hour more than the roadster. If the chief engineer of any American company made such a statement, I would have said, “Herman, you’ve got a big hole in your head.” But when the famous Kamm said it, all I could answer was, “Gee whiz.” It was hard to believe that there could be 50 miles an hour difference between the roadster, with its high pressure cockpit area and the super-streamlined coupe, but there it was right on the Doctor’s graph. If he is right, and I sure hope he is, the new Cunningham hardtop should be the biggest sensation in France since the invention of post cards.

It has been apparent for some time that it is just a question of a few years before all race cars, even at Indianapolis, will be closed hard-tops. I believe that by 1957 half the cars at Indianapolis, if not all, will be closed jobs and so will all Grand Prix entries. The open cockpit makes less and less sense, as speeds are increased. Johnny Fitch, who (teamed with Phil Walters) drove the only Cunningham that finished at Le Mans last year, told me he and Phil took an unmerciful beating from the wind which almost ripped the shirts off their backs. Comfort in a long race is of major importance and in an open car at speeds of 150 or more, comfort is just a word in the dictionary. Furthermore, a hardtop with a built-in roll bar is twice as safe as an open car.

The 24-hour race at Le Mans will be over by the time most of you read this and I haven’t got enough rocks in my head to predict what the Cunninghams will (or did) do over there But regardless of how they make out, their builder, Briggs Cunningham, is our only hope of getting the United States back into the international picture with cars of real importance. Ten years ago there weren’t a hundred sports cars on the roads in this country. Today there are thousands. There are many reasons for this great upsurge of interest in sports cars but Cunningham’s superb efforts to create an American version capable of competing with the world’s best has certainly been a tremendous influence on the ever-growing popularity of sports cars in America.

As one result of his pioneering, practically every American manufacturer has been forced to give some thought to the rising popularity of competition cars. Frankly, I don’t believe they really want any part of them and I feel that they consider the sports car bug a first-rate bull in a china shop. The American automobile manufacturer has the greatest money-making formula in the world and he is not going to give it up without a fight. From a pure dollars and cents standpoint, the present state of affairs is ideal. The Detroit boys make an all-round utility chassis that looks just as unhappy with a standard four-door sedan body as it does when saddled up with a so-called “sports convertible” bucket. The winning formula is to make sedans, sedans and more sedans, and make ’em big and flashy.

Some manufacturers, like Nash, actually have gone into sports car production in a small way. For this Nash deserves a pat on the back for actively getting on the sports car bandwagon and not bucking it. But cars such as GM’s Le Sabre and the Chrysler K310 seem designed only to make the public think the company is hep to sports car construction. Top Chrysler brass have told me they may very well build a limited number of their experimental cars for the prestige they would gain by doing so. I sat in on a conference with some of Packard’s V.I.P.’s when the subject of should we or should we not build a real sports car was booted around. No decision was reached in my presence although I sure got in my seven cents’ worth as to why they should.

But getting back to the immediate subject of this essay, Briggs Cunningham is building, here in America, the first really fine road car in a generation. True, it’s a competition car now but before the year is out at least a dozen hardtop coupes will be in the hands of the lucky buyers. I, for one, will stick my big bare head out to hear and claim that the new 1952 Cunninghams are perhaps the best sports cars in the world today and the fastest. •