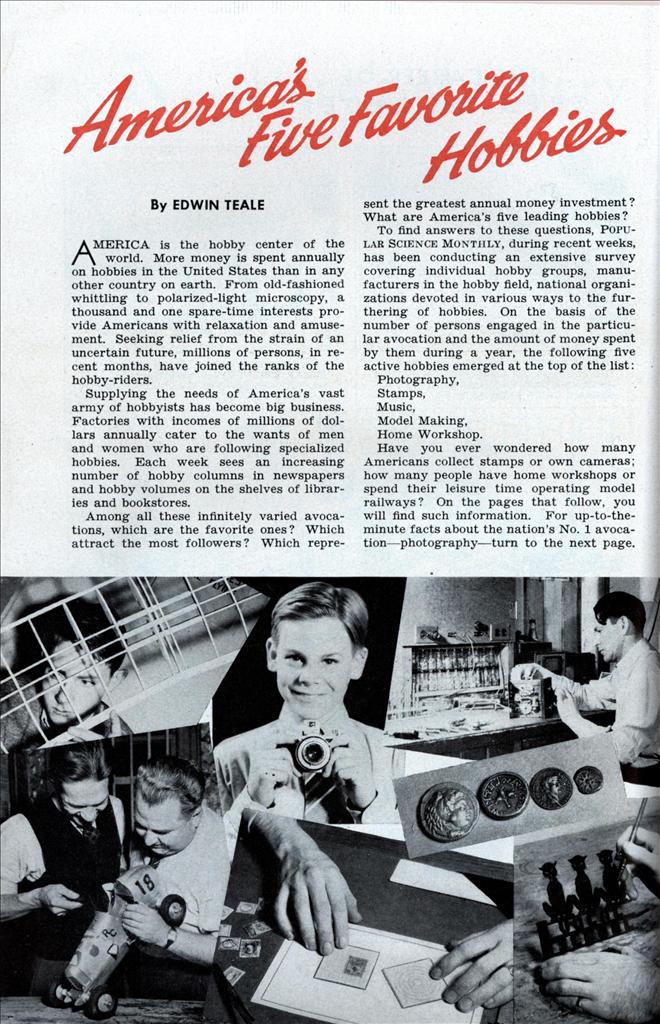 AMERICA is the hobby center of the world. More money is spent annually on hobbies in the United States than in any other country on earth. From old-fashioned whittling to polarized-light microscopy, a thousand and one spare-time interests provide Americans with relaxation and amusement. Seeking relief from the strain of an uncertain future, millions of persons, in recent months, have joined the ranks of the hobby-riders.

Supplying the needs of America’s vast army of hobbyists has become big business. Factories with incomes of millions of dollars annually cater to the wants of men and women who are following specialized hobbies. Each week sees an increasing number of hobby columns in newspapers and hobby volumes on the shelves of libraries and bookstores.

Among all these infinitely varied avocations, which are the favorite ones? Which attract the most followers? Which represent the greatest annual money investment ? What are America’s five leading hobbies?

To find answers to these questions, Popular Science Monthly, during recent weeks, has been conducting an extensive survey covering individual hobby groups, manufacturers in the hobby field, national organizations devoted in various ways to the furthering of hobbies. On the basis of the number of persons engaged in the particular avocation and the amount of money spent by them during a year, the following five active hobbies emerged at the top of the list: Photography, Stamps, Music, Model Making, Home Workshop.

Have you ever wondered how many Americans collect stamps or own cameras; how many people have home workshops or spend their leisure time operating model railways? On the pages that follow, you will find such information. For up-to-the-minute facts about the nation’s No. 1 avocation—photography—turn to the next page.

LAST YEAR, 19,000,000 amateur camera ‘fans clicked their shutters 600,000,000 times to record still pictures in the United States. They spent, during that year, more than $100,000,000 for film, supplies, and new equipment. The simple box camera, stand-by of amateurs for decades, is still top seller in American photographic stores. In 1939, the latest year for which such statistics are available, box cameras outsold all other types two to one. Of the 1,500,000 new cameras purchased that year, approximately 1,000,000 were box outfits. Miniature 35-millimeter cameras represent only about one percent of those used by American amateurs. The film most widely in demand is No. 120. Most photographed object in America is reported to be Oscar, polar bear at the Rochester, N. Y., Zoo. Eastman technicians try out new films by photographing Oscar’s white coat against a dark background.

Besides America’s 19,000,000 still-camera fans, there are some 500,000 home-movie enthusiasts. Eight-millimeter movie film outsells 16-millimeter in this field and, in the production of America’s leading maker of home-movie film, the Eastman company, Kodachrome leads black-and-white. More than 200 amateur movie clubs are active in the country. The number of still-camera organizations, counting both junior and adult groups, exceeds 9,000. There are about 5,000 adult clubs and approximately 4,000 school and junior photographic organizations in the country. New clubs are being formed at the rate of more than one a week. Nearly 100 such groups are active in the New York City area alone. There are camera clubs composed of doctors, of chemists, of Wall Street brokers, of telephone-company employes, of bankers, of a hundred and one other specialized groups. The largest photographic organization of the kind is one devoted to snapping railroad pictures. With headquarters in New York City, it has more than 15,000 members scattered in virtually every state in the union as well as in foreign countries. Smallest club is said to be a pictorial group with only eight members, four of which live in New York and four in Cuba. They get together for meetings at intervals of two or three years.

FIFTY MILLION DOLLARS a year, approximately, are being spent by the 12,000,000 Americans whose hobby is stamp collecting. The number of these enthusiasts, according to philatelic authorities, has zoomed from 2,000,000 in 1931 to six times that number in 1941.

During the Government’s last fiscal year, the Post Office Department sold $4,000,000 worth of new stamps to American collectors. This sum represented an almost clear profit for the Government. In New York City, more than 175,000 school children have stamp collections. Issues from countries overrun by Germany are now in greatest demand. All told, there are more than 150,-000 different kinds of stamps listed.

Many present-day enthusiasts are buying stamps as an investment as well as a hobby. A New York newspaper, a few weeks ago, carried an advertisement reading: “An entire lovely island, south shore, Massachusetts. Will consider exchange for North American stamp collection.” At least 10,000 persons in the United States are following a budget plan of stamp buying to build up college funds for their children. There are, experts say, more than fifteen collections in the United States worth $1,000,000 apiece.

Shifts in popularity of instruments have occurred in recent years. The once-popular banjo has almost disappeared, while the accordion is riding a new high tide of favor. The finest accordions, costing about $1,000, contain more than 3,500 parts and require six weeks to make.

THE whine of midget gas engines, the whir of miniature plane propellers, the metallic chatter of model railroad trains provide music to the ears of more than 2,250,000 Americans. Last year, approximately 2,000,000 model airplanes were turned out by amateurs in the United States. Nearly a quarter of them were powered by gasoline engines. The other 1,500,000 depended on conventional rubber-band motors. In recent months, the trend in model-plane building, naturally, has been toward military ships. One eastern amateur has a fleet of 15 gas jobs, each equipped with its own power plant. Similar air-cooled engines are being used in streamlined miniature racing cars. Competitions between these mile-a-minute midgets have increased in popularity during the past year and a half.

In all parts of the country, model railroading is as active as ever. Lumping together the “tinplaters,” who buy their equipment ready-made, and the “model railroaders,” who make theirs to scale, there are approximately 250,000 miniature-train enthusiasts in the United States. Last year, they spent $11,000,000 for new electric trains alone. The average model railroader spends about $3 a week on his hobby. More than 100,000 of these hobbyists are said to have equipment that is worth $400 or more.

HOME WORKSHOP 2,000,000 SHOPS IN 2,000,000 home workshops, American hobbyists are finding fun working with tools and making things of wood and metal. Stemming from one of the most time-honored hobbies of all, whittling, home craftwork has branched out in many directions. Approximately one in four shops, 500,000 out of the 2,000,000 total, are equipped with power tools. According to the estimate of one machinery manufacturer, home-workshop hobbyists in the United States install annually about $5,500,000 worth of new electric-driven machines. Approximately 400,000 of the home-workshop fans are fortunate enough to possess power lathes. The average amount spent in twelve months by the confirmed home workshopper on tools and materials runs between $50 and $100.

Both farm and city dwellers enjoy home workshops. A few years ago, when a leading farm journal made a survey of its readers, it discovered that 27 percent of all the farmers who replied to the questionnaire had home workshops and spent their leisure on craft projects.

Besides woodworking, carving, furniture-making, and metal work, there are numerous specialized branches of home-workshop activity. One of the leading variations of the kind is amateur radio. The 56,000 licensed amateurs in the country construct, operate, and repair their own wireless sets. They range from schoolboys to octogenarians. The youngest is 11 and the oldest 88. One amateur has a layout that cost $25,000 while scores of “ham” operators get along on a total investment of $25. Banded together in The American Radio Relay League, 26,000 of these amateurs help maintain communication when floods or storms interrupt telegraph and telephone service.