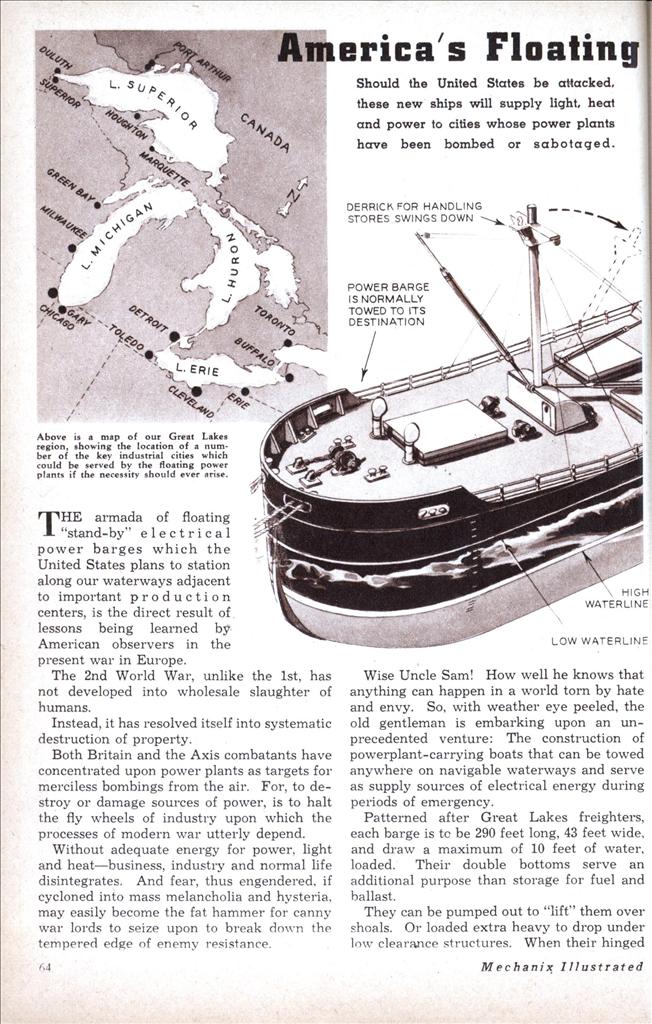 The 2nd World War, unlike the 1st, has not developed into wholesale slaughter of humans.

Instead, it has resolved itself into systematic destruction of property.

Both Britain and the Axis combatants have concentrated upon power plants as targets for merciless bombings from the air. For, to destroy or damage sources of power, is to halt the fly wheels of industry upon which the processes of modern war utterly depend.

Without adequate energy for power, light and heat—business, industry and normal life disintegrates. And fear, thus engendered, if cycloned into mass melancholia and hysteria, may easily become the fat hammer for canny war lords to seize upon to break down the tempered edge of enemy resistance.

Wise Uncle Sam! How well he knows that anything can happen in a world torn by hate and envy. So, with weather eye peeled, the old gentleman is embarking upon an unprecedented venture: The construction of powerplant-carrying boats that can be towed anywhere on navigable waterways and serve as supply sources of electrical energy during periods of emergency.

Patterned after Great Lakes freighters, each barge is to be 290 feet long, 43 feet wide, and draw a maximum of 10 feet of water, loaded. Their double bottoms serve an additional purpose than storage for fuel and ballast.

They can be pumped out to “lift”‘ them over shoals. Or loaded extra heavy to drop under low clearance structures. When their hinged smokestacks are lowered, the barges can pass under bridges only fifteen feet above water surface.

The War Department, father of the plan, has designed the unique craft to develop 50,000-kilowatts. Refueling can easily be done from oil tankers brought alongside.

“A large part of the key industrial areas of the nation can be reached by such boats from United States harbors, lakes and rivers,” declares Prof. Royal W. Sorensen, of California Institute of Technology, and president-elect of the American Institute of Electrical Engineers.

A glance at a map of the United States shows that this is true.

Let your eyes search-out the centers of heavy manufacturing. Where are they?

Automatically your finger follows along the three coastlines of the United States. Thence over the contours of the Great Lakes. And lastly you trace along those black threads that denote such navigable streams as the Mississippi, Ohio, Delaware, Hudson and Columbia. The airplane carrier Lexington, by its “rescue” of the city of Tacoma, Washington, is the prototype for this amazing “power flotilla” project. In 1929 when Tacoma’s hydro-electric system failed because of water shortage, the city was suddenly flung into darkness, its industries idled, its shops distressed. From the city’s docks, one could readily see the giant carrier riding at anchor in Puget Sound—180,000 horsepower at leash within her huge steel hull.

Then an amazing thing happened. Permission was granted the electrically propelled warship to splice her “juice” lines into the city’s power circuit. And for several days and nights, while the civilized world looked on in awe, the Lexington’s mighty generators kept a city of more than 100,000 persons in power, light and heat until its own supply defection was healed!

Perhaps it is true that no lesson being taught by World War No. 2 is more trenchant than that the powerplant engineer is in greater jeopardy of life and limb than an infantryman.

This same type of threat is gaining head in the United States, with this single difference: Subversion by sabotage supplanting the aerial bombings of the European picture. So bold and dire have become these plots that extra guards patrol all major factories where war orders are under way, and visitors are unwelcome in most power plants.

On the other hand no nation is so bountifully supplied with electricity for every purpose as is America.

And happily, an impressive percentage of existing power lines in the U. S. interlock with circuits of other power houses, and in this manner are able to serve as “stand-by” plants, on call.

However, due to America’s welling defense efforts, certain areas of the country are so meagerly powered that havoc to a single power unit would throw the industry of a whole region out of gear.

The flotilla of steam generator electric power plants is Uncle Sam’s answer to this problem. The unique barges can be towed into virtually every important manufacturing region of the nation, save the Rocky Mountain area. Nor need their usefulness be restricted to the United States alone. Other equally Jules Verneish uses have been proposed.

For instance, in supplying electrical current for the development of mining operations in Antarctica, whose known resources in minerals remain untapped because of the power difficulty.

Or the seasonal electrification of our valuable Alaska fish canning industry.

Or providing light, heat and power for the duration of colonization or exploitation periods in out-of-way regions which are, however, accessible to watercraft, such as the vast areas of the upper Amazon and its tributaries.