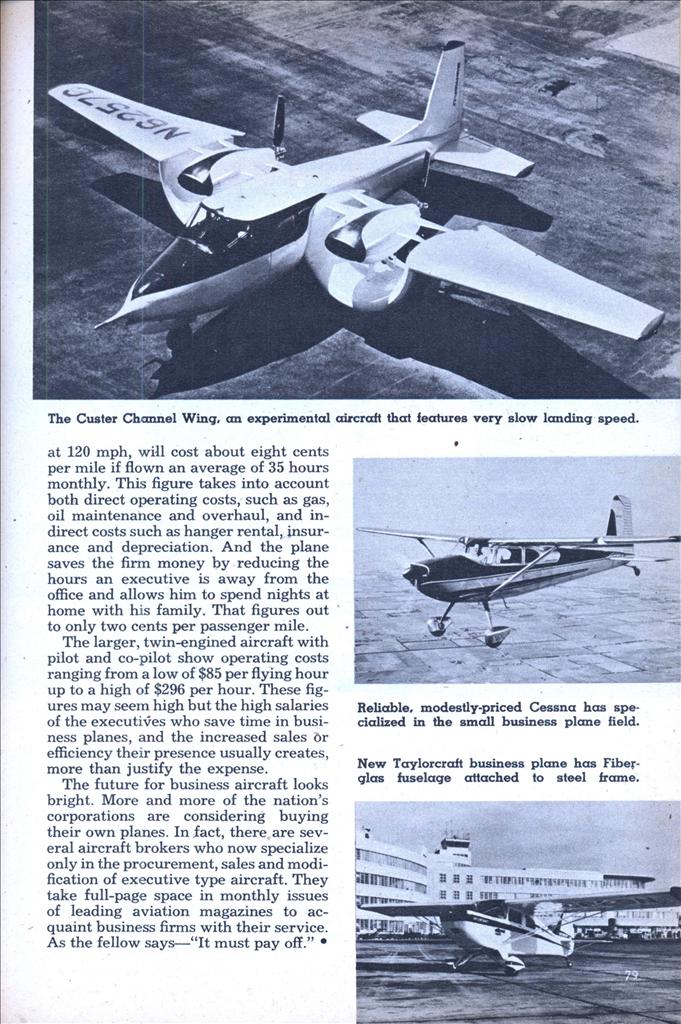 COWBOY singing star Gene Autry spends more time in the cockpit of his Beechcraft Model 18 than he does in the saddle. Autry is a skilled flier with an Air Transport Pilot rating. A typical business trip will find him flying to 32 cities in 32 days, covering more than 4,200 miles. “It would be impossible for me to. maintain such a tight schedule without my own plane. You just can’t make commercial airline connections that way,” says Gene. Besides skipping the schedules and connections problem, Autry has had only two field delays in as many yearsâ€”both due to weather rather than maintenance trouble.

Autry’s use of aircraft as a business tool is symptomatic of no mere fad in the commercial world. In 1946 about 900 companies operated a total of 2,500 planes. In 1953 (latest figures available), over 21,500 aircraft were operated by firms and individual executivesâ€”a fleet about 16 times larger than that operated by all the nation’s domestic airlines combined. In 1953, the business airplanes flew approximately 903,000,000 miles compared with about 525,000,000 miles for the scheduled airlines.

Business planes are one reason that aviation is the largest employer of labor in American industry. Their owners spend about $420,000,000 annually for maintenance, fuel, oil and related goods and services. At the present rate of growth, the figure will probably reach a billion dollars annually by 1965.

The trend toward industrial decentralization has boosted business flying tremendously. In 1940 about 50 per cent of all plants were located in cities having populations in excess of 100,000. Today the figure has dropped to about one-third; about 30 per cent of the new plants are in towns of 10,000 or less.

With approximately 6,000 airports in the U. S. and only about 600 served by the airlines, it is easy to see why American business firms have taken to the air in their own planes. Approximately 70 per cent of today’s business flying is off the commercial air routes. U. S. corporations have been quick to realize that operating their own aircraft would enable high-salaried executives to cover far-flung empires in hours rather than days.

Salesmen have found the use of aircraft fully proves the old business axiom that “the more calls you make, the more sales you make.” For example, F. S. Killius, Divisional Sales Manager for the Lustra Corporation of America, Phoenix, Ariz., took his first flying lesson about one year ago. Today he is flying thousands of miles monthly for his company in a Piper Tri-Pacer, a single-engined, four-place airplane with a tricycle landing gear. “My Piper has made it possible for me to triple my sales region,” says Killius. “I now cover all of Arizona, West Texas, New Mexico, Colorado, Wyoming, Utah, Nevada and eastern California.”

The types of planes used by business firms and executives range from a single-seater Mooney Mite of 65 horsepower to high-powered twin-engine aircraft such as the venerable DC-3 and Lockheed Lodestars. In between these two extremes are such popular aircraft as the Piper Tri-Pacer, Beechcraft Bonanza, Cessna 180 and 195, all single-engine types, and the newer twin-engined Piper Apache, Cessna 310 and Beechcraft twin-Bonanza.

Prices range from about $3,695 for the Mooney Mite to over $300,000 for the larger airline type of aircraft. Most of the smaller, single-engined planes are four-seaters, while the twins range from four to 20 passengers. The interiors of some of the larger twin-engined types are veritable “flying offices” with overstuffed chairs, desks, kitchen facilities and lounge.

Over 1800 of the company-owned planes are multi-engined, well-equipped with flight instruments and safety devices to fly anywhere in almost any kind of weather.

The men who pilot them are among the most skilled in the world. They have to be, for they not only operate in and out of the larger airports but also land at many small off-airway fields. The National Business Aircraft Association proudly points out that insurance actu-raries consider its pilots twice as good a risk as house painters! Salaries range from $5,000 (part time) to $30,000 annually.

One of the largest of the business plane fleet operations is that of the Arabian American Oil Co., which rivals that of a small airline in its scope. Aram-co has 18 planes and 220 persons in its aviation department. It runs a scheduled twice-weekly service between New York City and Saudi Arabia, near its oil fields there. The 7,000-mile route is flown by DC-6B and DC-4 aircraft, carrying personnel and supplies.

Operating expenses for company-owned airplanes vary according to the type of planes used and the number of hours the aircraft are flown. A Piper Tri-Pacer, that carries four passengers at 120 mph, will cost about eight cents per mile if flown an average of 35 hours monthly. This figure takes into account both direct operating costs, such as gas, oil maintenance and overhaul, and indirect costs such as hanger rental, insurance and depreciation. And the plane saves the firm money by reducing the hours an executive is away from the office and allows him to spend nights at home with his family. That figures out to only two cents per passenger mile.

The larger, twin-engined aircraft with pilot and co-pilot show operating costs ranging from a low of $85 per flying hour up to a high of $296 per hour. These figures may seem high but the high salaries of the executives who save time in business planes, and the increased sales or efficiency their presence usually creates, more than justify the expense.

The future for business aircraft looks bright. More and more of the nation’s corporations are considering buying their own planes. In fact, there are several aircraft brokers who now specialize only in the procurement, sales and modification of executive type aircraft. They take full-page space in monthly issues of leading aviation magazines to acquaint business firms with their service. As the fellow saysâ€””It must pay off.”