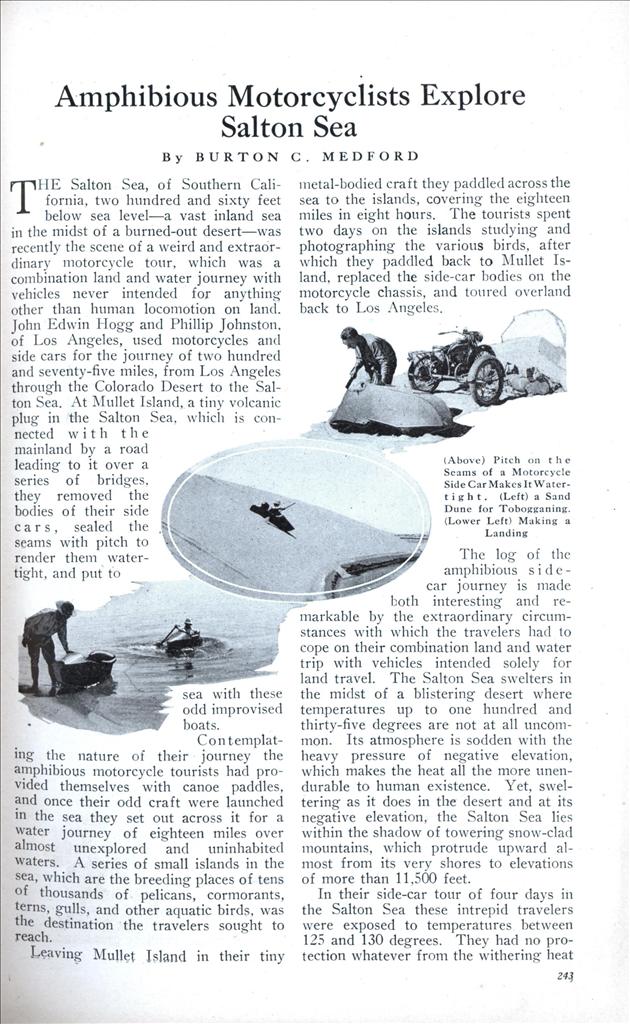 THE Salton Sea, of Southern California, two hundred and sixty feet below sea level—a vast inland sea in the midst of a burned-out desert—was recently the scene of a weird and extraordinary motorcycle tour, which was a combination land and water journey with vehicles never intended for anything other than human locomotion on land. John Edwin Hogg and Phillip Johnston, of Los Angeles, used motorcycles and side cars for the journey of two hundred and seventy-five miles, from Los Angeles through the Colorado Desert to the Salton Sea. At Mullet Island, a tiny volcanic plug in the Salton Sea, which is connected with the mainland by a road leading to it over a series of bridges, they removed the bodies of their side cars, sealed the seams with pitch to render them watertight, and put to ‘ sea with these odd improvised boats.

Contemplating the nature of their journey the amphibious motorcycle tourists had provided themselves with canoe paddles, and once their odd craft were launched in the sea they set out across it for a water journey of eighteen miles over almost unexplored and uninhabited waters. A series of small islands in the sea, which are the breeding places of tens of thousands of pelicans, cormorants, terns, gulls, and other aquatic birds, was the destination the travelers sought to reach.

Leaving Mullet Island in their tiny metal-bodied craft they paddled across the sea to the islands, covering the eighteen miles in eight hours. The tourists spent two days on the islands studying and photographing the various birds, after which they paddled back to Mullet Island, replaced the side-car bodies on the motorcycle chassis, and toured overland back to Los Angeles.

The log of the amphibious side-car journey is made both interesting and remarkable by the extraordinary circumstances with which the travelers had to cope on their combination land and water trip with vehicles intended solely for land travel. The Salton Sea swelters in the midst of a blistering desert where temperatures up to one hundred and thirty-five degrees are not at all uncommon. Its atmosphere is sodden with the heavy pressure of negative elevation, which makes the heat all the more unendurable to human existence. Yet, sweltering as it does in the desert and at its negative elevation, the Salton Sea lies within the shadow of towering snow-clad mountains, which protrude upward almost from its very shores to elevations of more than 11,500 feet.

In their side-car tour of four days in the Salton Sea these intrepid travelers were exposed to temperatures between 125 and 130 degrees. They had no protection whatever from the withering heat of the sun, and the temperatures at night never fell below 110 degrees. In this blistering heat they were compelled to be entirely upon their own resources for food and water, carrying their limited supplies of these life-sustaining commodities in their tiny improvised water craft. The water of the Salton Sea is about twice as salty as ocean water, hence it is useless for human con-sumption, while at the same time not sufficiently saline to support the weight of the human body as does the water of Great Salt Lake. In that blistering heat one requires a great deal of water, for perspiration must be kept flowing from the skin to reduce the blood temperature. If the temperature of the human blood were ever permitted to climb to that of the surrounding atmosphere, a fatal fever would be the quick result. Hogg and Johnston carried thirty-six quarts of water apiece: obviously not enough for four days in such heat. Their short rations of water, however, were partially compensated for by frequently wetting their clothing with the sea water for cooling purposes and the absorption of moisture through their skins. For food they carried limited rations of concentrated nourishment, dry hardtack, and dried meat. Their food supply was further augmented by a fishing rod, used to bring in several of the large edible mullets which are plentiful in the Salton Sea.

Death from drowning stared the travelers in the face over the entire Salton Sea journey. A side-car body is a “cranky craft” in the water, and if either had been turned over in the sea the improvised boat, being made entirely of metal, would have instantly gone down in sixty feet of salt water. Had this happened they would have had no chance for life except to swim back to Mullet Island, for no human being could ever swim ashore and land on the mainland of the Salton Sea. This is because the shore line about the sea slopes away for several miles to the mountains at the rate of one foot to the mile. In consequence, the shore line is a mass of sticky salt slime into which a man on foot will bog down out of sight more readily than in quicksand. To guard against the danger of drowning the travelers wore inflated motorcycle inner tubes about their waists, which gave them, with their ability as powerful swimmers, some assurance of being able to swim to Mullet Island in case of necessity.

Their exploration was successfully made despite its hazardous character and they returned to civilization with many interesting tales and much valuable information.