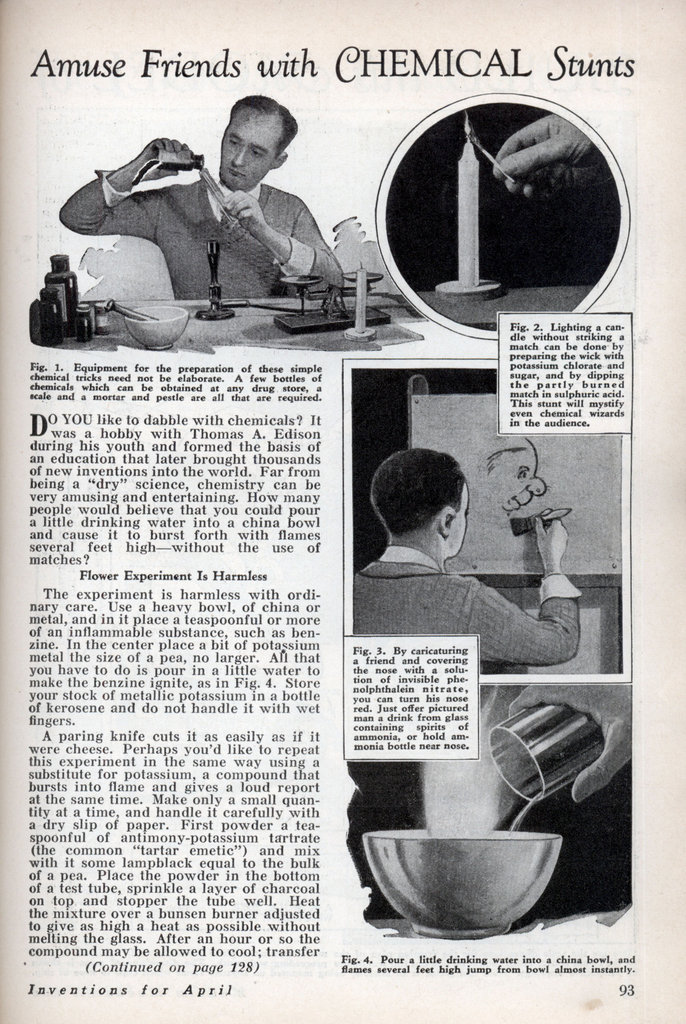 DO YOU like to dabble with chemicals? It was a hobby with Thomas A. Edison during his youth and formed the basis of an education that later brought thousands of new inventions into the world. Far from being a “dry” science, chemistry can be very amusing and entertaining. How many people would believe that you could pour a little drinking water into a china bowl and cause it to burst forth with flames several feet highâ€”without the use of matches?

Flower Experiment Is Harmless The experiment is harmless with ordinary care. Use a heavy bowl, of china or metal, and in it place a teaspoonful or more of an inflammable substance, such as benzine. In the center place a bit of potassium metal the size of a pea, no larger. All that you have to do is pour in a little water to make the benzine ignite, as in Fig. 4. Store your stock of metallic potassium in a bottle of kerosene and do not handle it with wet fingers.

A paring knife cuts it as easily as if it were cheese. Perhaps you’d like to repeat this experiment in the same way using a substitute for potassium, a compound that bursts into flame and gives a loud report at the same time. Make only a small quantity at a time, and handle it carefully with a dry slip of paper. First powder a tea-spoonful of antimony-potassium tartrate (the common “tartar emetic”) and mix with it some lampblack equal to the bulk of a pea. Place the powder in the bottom of a test tube, sprinkle a layer of charcoal on top and stopper the tube well. Heat the mixture over a bunsen burner adjusted to give as high a heat as possible without melting the glass. After an hour or so the compound may be allowed to cool; transfer the chunk of material to a well stoppered bottle and after it has crumbled to a powder it is ready for use. Simply pour water on a bit of it in a bowl.

Sulphuric acid can be used to light a candle, as in Fig. 2. The acid is on the end of the partly burned match, while the candle wick is prepared by first dipping in a thick paste of two parts potassium chlorate and one part sugar, which is allowed to dry before the experiment. Powder the sugar and potassium chlorate separately and then mix with a small amount of water.

Here is another amusing chemical experiment. Dissolve a chunk of paraffin the size of a hickory nut in two ounces of benzole and using it with a pencil-size brush draw a picture of a caricature with a very large nose on paper or cardboard.

Fill in the nose portion with a water solution of cobalt nitrate. When dry the drawing will be practically invisible but it can be restored by passing a soft brush, dipped in lampblack, carefully over the lines. The lampblack will adhere to the paraffined lines, as in Fig. 3. Slightly heat the “picture” and the nose will turn red. If, at the time of preparing the drawing, you fill in the nose with a blue solution of cobalt chloride it will be blue until heated; then it will turn red.