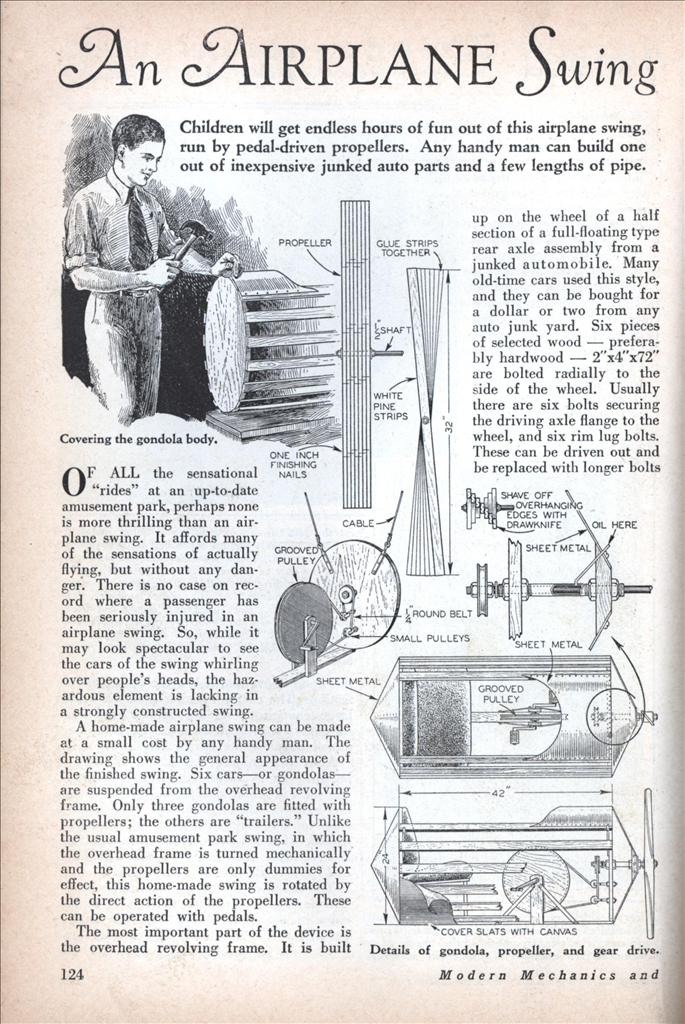 An Airplane Swing for Air-minded Youths

Swinging back and forth in this miniature plane, youngsters can duplicate in imagination all the feats of world famous aviators—all with absolute safety, of course. The swing is easy to build and will make a very fine addition to any playground.

Nothing that you might make for a lively child will please him half as much as a swing built to look like an airplane. In imagination he will duplicate the great flights he has heard tell about; yes, surpass them with a flight to the moon. He will break this and that record and, but for “refueling,” he might pay little heed to meal and bedtime signals. He will develop air-mindedness, surely.

The pipe and pipe-fitting stick, with ground connection, is well suited to a swing for a young child, as it makes it possible for him to keep the swing in motion, at the same time giving him beneficial arm and back exercise.

You will get the idea of the assembly from the accompanying drawings. The fuselage framework is built of 2-by-2s, as illustrated in Fig. 2. Build a pair of side frames like that shown. Then connect them with strips set in between the longerons. The plan shows the distances between the side frames. Make the nose frame of the dimensions given in Fig. 2, and connect it to the fuselage framework with longeron strips about 16 inches long, with ends beveled to fit squarely. When you have completed the framework assembly, cut away the upper longerons as indicated to provide for the curved cockpit coaming.

Cover the fuselage framework with sheet metal such as galvanized iron, or with heavy building paper. Cut the pieces to fit, punch their edges for nailing, and fasten with common nails. Curve the edges of the cockpit cowling and coaming, as shown in Fig. 1.

Next comes the wing. Figure 2 shows a framework detail. The spars are of 1-by-2 stock, the ribs of 2-by-2 stock. Cover the wing framework also with sheet metal, cutting pieces 27 inches wide, to make a projection of 2-1/2 inches over the sides of the framework.

The wing struts are of 2-by-2 stock, cut to lengths given in Fig. 1 and bolted to the fuselage. Fasten the wing to their tops. Brace the wing ends with the pairs of iron braces and bolts as shown in Fig. 1. Make the step of a 1-by-4 board, and fasten it to the side of the fuselage, as shown.

Figure 3 shows a front view of the motor cylinders. The bases are boards 3^ inches wide, notched on their edges, and the cylinders are blocks shaped half round. Complete the nose with two wooden disks 5 and 6^2 inches in diameter. Center them and nail them to the fuselage.

The propeller is carved out of a piece of 2-by-4 27 inches long, as shown in Fig. 3. Shape the blades with a drawknife, and smooth them with a plane and sandpaper. Bore a 3/4-inch hole through the hub center to admit the shaft. Make the propeller shaft of a 1/2-inch pipe nipple 3 inches long. Screw one end of the nipple into a floor flange, and bolt the flange to the center of the nose. Slip the propeller onto the nipple, and screw on a pipe cap to hold it in place.

Now for the landing gear. Get a pair of wagon or baby carriage wheels and an axle. Bore holes through the lower ends of the front wing struts, slip the wheel axle through the holes, and attach the wheels.

The pipe and pipe fittings assembly of the stick is shown in detail in Fig. 3. This rig, of course, limits the swinging range, but it will satisfy a young child. The sockets on the lower longerons that the horizontal pipe ends turn in are made of pipe strap. A loose connection is necessary between the bottom nipple and tee to permit the nipple to turn when the swing is in motion. The large tee on the ground pipe is required because it must slip up and down freely on the pipe.

Figure 1 shows the scheme of hanging the airplane swing from a tree branch or other support. There is no advantage in using the perforated pipe strap, except that it is easy to obtain, and the perforations save the drilling of bolt holes. Hammock chain would be better for a free swinging job.

When the swing is hung, give all metal work a coat of red lead, then finish surfaces with automobile enamel in bright colors.

To make your swing look and operate more like a real airplane you can mount an electric motor in the nose and attach the propeller to the shaft. With the prop whirring round at a good speed, your swing will have the appearance of a large plane in actual flight.

Current for the motor can be taken from the house supply by means of an extension.

This arrangement, however, might prove dangerous if small children are around, so it would be advisable to build a large shield for the prop.

If you wish to increase the range of the swing, it will be a good idea to suspend it higher in the air, and at the same time increase the length of the pipe between the cross piece and the elbow which slides on the ground pipe. This ground pipe will also have to extend up further from the ground. It will require more effort to operate the swing like this but there will be much more fun in it.