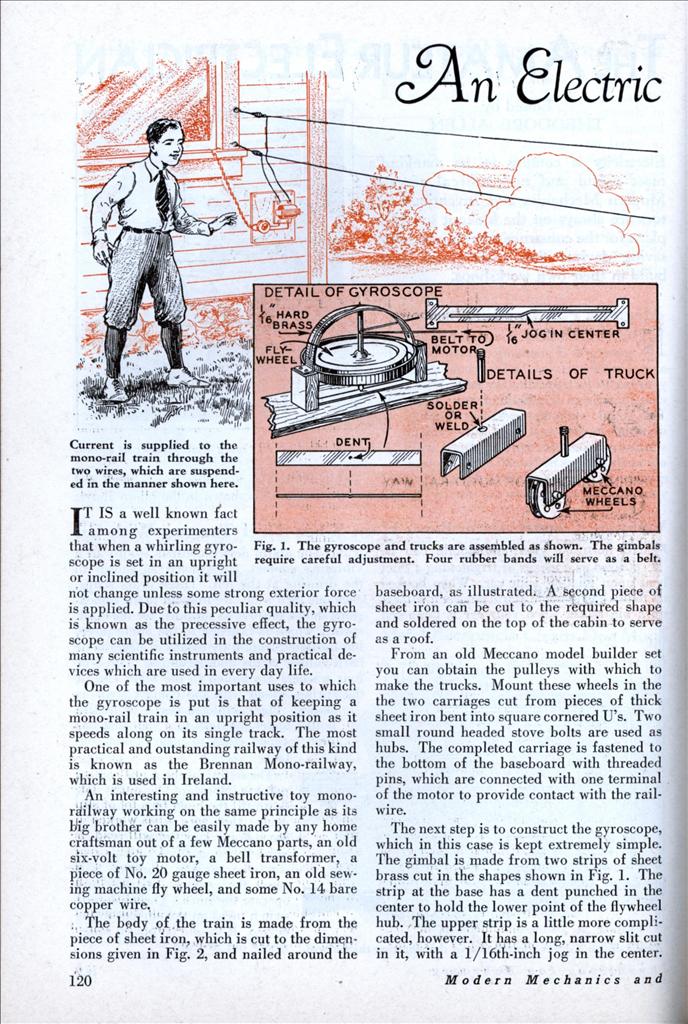 IT IS a well known fact among experimenters that when a whirling gyroscope is set in an upright or inclined position it will not change unless some strong exterior force is applied. Due to this peculiar quality, which is known as the precessive effect, the gyroscope can be utilized in the construction of many scientific instruments and practical devices which are used in every day life.

One of the most important uses to which the gyroscope is put is that of keeping a mono-rail train in an upright position as it speeds along on its single track. The most practical and outstanding railway of this kind is known as the Brennan Mono-railway, which is used in Ireland.

An interesting and instructive toy mono-railway working on the same principle as its big brother can be easily made by any home craftsman out of a few Meccano parts, an old six-volt toy motor, a bell transformer, a piece of No. 20 gauge sheet iron, an old sewing machine fly wheel, and some No. 14 bare copper wire.

From an old Meccano model builder set you can obtain the pulleys with which to make the trucks. Mount these wheels in the the two carriages cut from pieces of thick sheet iron bent into square cornered U’s. Two small round headed stove bolts are used as hubs. The completed carriage is fastened to the bottom of the baseboard with threaded pins, which are connected with one terminal of the motor to provide contact with the rail-wire.

The next step is to construct the gyroscope, which in this case is kept extremely simple. The gimbal is made from two strips of sheet brass cut in the shapes shown in Fig. 1. The strip at the base has a dent punched in the center to hold the lower point of the flywheel hub. The upper strip is a little more complicated, however. It has a long, narrow slit cut in it, with a l/16th-inch jog in the center.

The reason for this is plain on a little study. If the gyroscope is mounted on straight gimbals, there will he no turning or righting effect. But with the jog, or precession fork, the minute gravity attempts to sway the car the gyro hub hits the righting notch in the precession fork, bringing the car immediately into an upright position.

The flywheel from an old Model 10 Singer sewing machine will serve as a flywheel for the gyroscope. A small notch is filed in the hub to form the pulley, as shown in Fig. 1. As a driving belt, you can use four rubber bands.

The gyroscope is driven by a six-volt electric motor which is mounted on the base board in the position illustrated. The Meccano Model Builder set will supply you with parts for constructing the gear and pulley system which connects the motor to i the gyro. The gears should be so arranged that the gyro will turn at a rate of about 6000 revolutions per minute.

A trolley is all that is needed now to complete the car. This can be made of a piece of No. 10 bare copper wire bent into the shape shown in the drawing and soldered or bolted to the top of the sheet iron cabin. A wire is soldered to the supporting bolt and run to the remaining terminal of the motor.

With the train now completed, you can proceed to erect the trolley wire and the rail, both of which consist of lengths of No. 14 bare copper wire suspended in the manner shown in the accompanying drawings. Insulators are placed at both ends to avoid short circuits, and at the house end two leads are taken off and run to the secondary of a bell transformer, which supplies the current through the wires to the motor.

In running the car, you will have to allow several minutes for the flywheel of the gyroscope to pick up speed. This might take longer, as there will no doubt be a lot of slipping in the belt. When once it has worked up to a good speed, a gentle shove will send the train moving along the wire. To give a realistic effect to the car, you can paint it an aluminum color, and add a small headlight to the front. In- case no bell transformer is procurable, you can use a six-volt storage battery or four dry cells in series. A control board is arranged as shown.