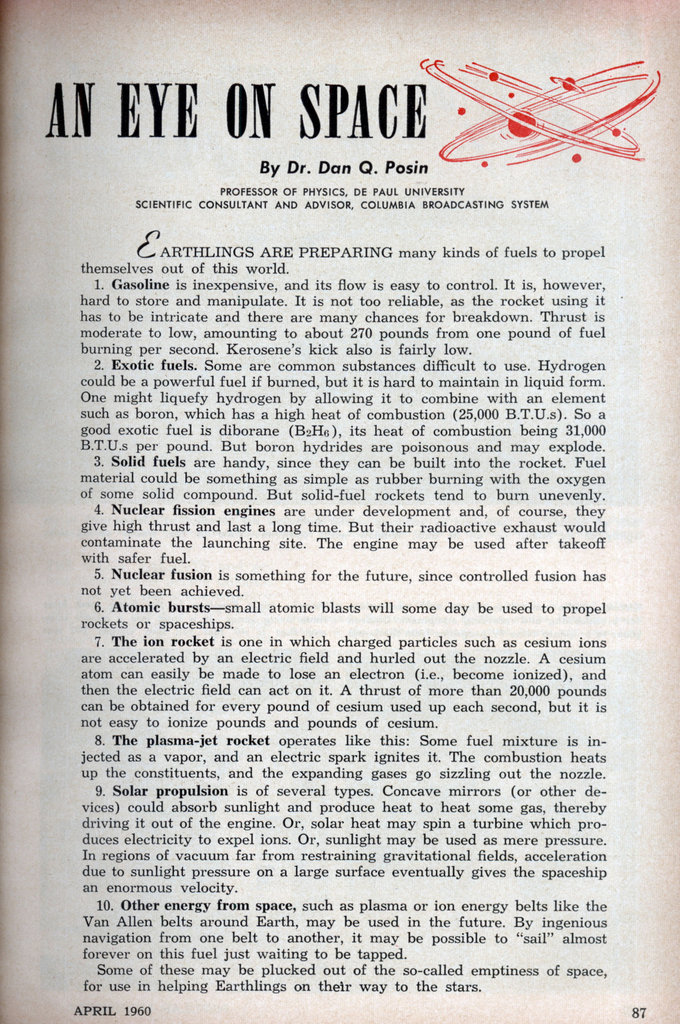 AN EYE ON SPACE

EARTHLINGS ARE PREPARING many kinds of fuels to propel themselves out of this world.

1. Gasoline is inexpensive, and its flow is easy to control. It is, however, hard to store and manipulate. It is not too reliable, as the rocket using it has to be intricate and there are many chances for breakdown. Thrust is moderate to low, amounting to about 270 pounds from one pound of fuel burning per second. Kerosene’s kick also is fairly low.

2. Exotic fuels. Some are common substances difficult to use. Hydrogen could be a powerful fuel if burned, but it is hard to maintain in liquid form. One might liquefy hydrogen by allowing it to combine with an element such as boron, which has a high heat of combustion (25,000 B.T.U.s). So a good exotic fuel is diborane (B2H6), its heat of combustion being 31,000 B.T.U.s per pound. But boron hydrides are poisonous and may explode.

3. Solid fuels are handy, since they can be built into the rocket. Fuel material could be something as simple as rubber burning with the oxygen of some solid compound. But solid-fuel rockets tend to burn unevenly.

4. Nuclear fission engines are under development and, of course, they give high thrust and last a long time. But their radioactive exhaust would contaminate the launching site. The engine may be used after takeoff with safer fuel.

5. Nuclear fusion is something for the future, since controlled fusion has not yet been achieved.

6. Atomic bursts—small atomic blasts will some day be used to propel rockets or spaceships.

7. The ion rocket is one in which charged particles such as cesium ions are accelerated by an electric field and hurled out the nozzle. A cesium atom can easily be made to lose an electron (i.e., become ionized), and then the electric field can act on it. A thrust of more than 20,000 pounds can be obtained for every pound of cesium used up each second, but it is not easy to ionize pounds and pounds of cesium.

8. The plasma-jet rocket operates like this: Some fuel mixture is injected as a vapor, and an electric spark ignites it. The combustion heats up the constituents, and the expanding gases go sizzling out the nozzle.

9. Solar propulsion is of several types. Concave mirrors (or other devices) could absorb sunlight and produce heat to heat some gas, thereby driving it out of the engine. Or, solar heat may spin a turbine which produces electricity to expel ions. Or, sunlight may be used as mere pressure. In regions of vacuum far from restraining gravitational fields, acceleration due to sunlight pressure on a large surface eventually gives the spaceship an enormous velocity.

10. Other energy from space, such as plasma or ion energy belts like the Van Allen belts around Earth, may be used in the future. By ingenious navigation from one belt to another, it may be possible to “sail” almost forever on this fuel just waiting to be tapped.

Some of these may be plucked out of the so-called emptiness of space, for use in helping Earthlings on their way to the stars.