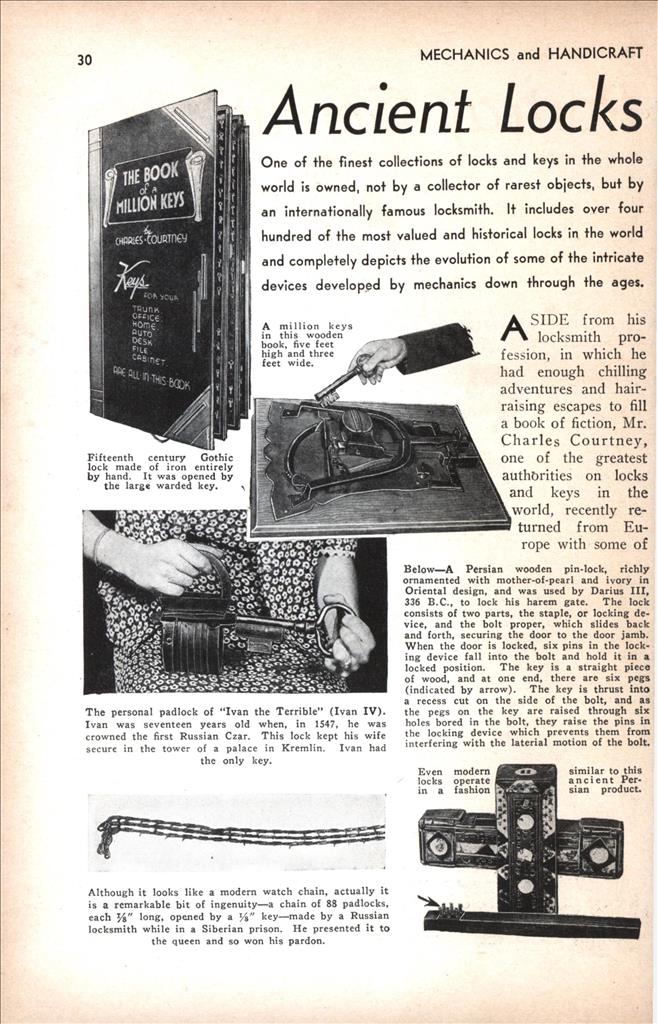 One of the finest collections of locks and keys in the whole world is owned, not by a collector of rarest objects, but by an internationally famous locksmith. It includes over four hundred of the most valued and historical locks in the world and completely depicts the evolution of some of the intricate devices developed by mechanics down through the ages.

ASIDE from his locksmith profession, in which he had enough chilling adventures and hair-raising escapes to fill a book of fiction, Mr. Charles Courtney, one of the greatest authorities on locks and keys in the world, recently returned from Europe with some of the most prized specimens of the locksmith’s art. Among them were the famous collection of keys belonging to the Rothschilds (unearthed from the ruins of Pompeii some years ago), the collection of locks owned by the late Kaiser Franz Joseph of Austria, and the personal collection of the late Andreas Dillinger (collector of locks and keys for the Techniches Museum of Vienna).

If these locks and keys could talk, what a wealth of romance, tragedy and happiness they would reveal; what unsolved mysteries they would bring to light.

One of the locks, sifted from the sands near Alexandria, Egypt, is over 2,000 years old; another imprisoned the Mexican Emperor, Maximilian; one belonging to “Ivan the Terrible” and a group of locks from the Far East, were one property of Nicholas I. In Mr. Courtney’s collection one also finds a primitive Egyptian pin-lock, a Persian lock (said to have been used by Darius III, 336 B. C. and believed to be the forerunner of the modern lock), an interesting example of an early Roman “trigger” lock, a lock found on a palace in Budapest following the invasion of the Turks, 1529 A. D., and many interesting examples of locks and keys in early Gothic and Renaissance design.

The complete collection affords a glimpse into the construction of scientific keyways, locks and bolts, and traces the evolution of locks from the wooden pin-lock of the Egyptians, and the ponderous metal locks of the Middle Ages, down to the present mechanical improvement, thus revealing the gradual mechanical progress of the locksmith’s art from 400 B. C. to date.

The photos on these pages show some of the more historical or unique conceptions of their day.