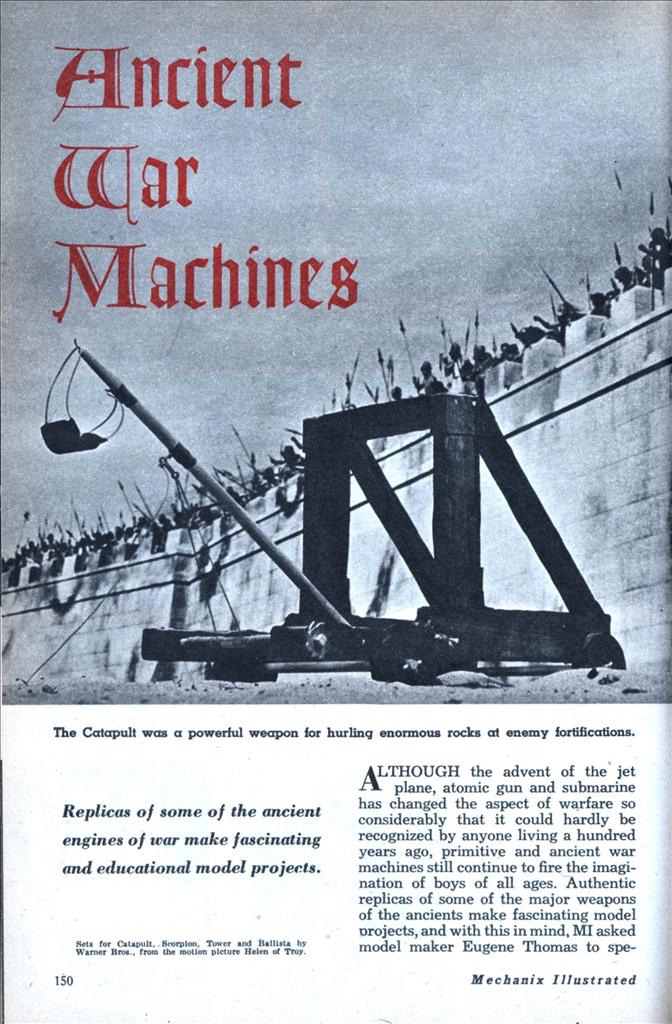 Replicas of some of the ancient engines of war make fascinating and educational model projects.

ALTHOUGH the advent of the jet plane, atomic gun and submarine has changed the aspect of warfare so considerably that it could hardly be recognized by anyone living a hundred years ago, primitive and ancient war machines still continue to fire the imagination of boys of all ages. Authentic replicas of some of the major weapons of the ancients make fascinating model projects, and with this in mind, MI asked model maker Eugene Thomas to specially build a set of these models and draw up easy-to-follow plans.

The five machines shown are the Catapult, Scorpion, Springal, Ballista and Tower. The Tower, the most important of the engines of war is first mentioned in Nebuchadnezzar’s siege of Tyre and Jerusalem in 587 BC. Other types of machines were used as far back as the siege of Troy in 1100 BC. Philip of Macedonia, 360-336 BC, also made extensive use of various types of siege engines. These Towers ranged from 70 to 150 feet in height and were moved on wheels of solid oak, twelve feet in diameter, three to four feet thick. Used for attacks against walls, they were so high that from their top the parapet walks of the wall could be swept with arrows and stones; drawbridges were then lowered from the tower by which the storming party could reach the top of the wall.

The Ballista, extensively used by Caesar, is a crossbow-type of weapon used for the discharge of small stones or arrows, mainly for direct fire. The Catapult dates from the same period but was used as a siege engine, throwing bolts or rocks at a high angle of elevation. Some of these machines were enormous, firing from 58 lb. (1 talent) to 580 lb. rocks at opposing walls, as mentioned by Marcellus. The range varied from 400 to 800 yards. Four soldiers were used on each side of the engine to wind down the arm until it was almost level with the ground. The missile was then inserted in the sling and the weapon fired by pulling the lanyard. The Scorpion also belongs to the family of catapults and got its name from the scorpion-like action of its arm. It was later called Onager (wild ass), comparing it to the kick of an ass.

The Springal, probably dating from the 3rd century BC, was one of the forerunners of the machine gun, firing a succession of arrows or burning spears. It is similar to the Polybolos, or Repeater-Thrower, invented by Dionysius at about the same time. The skeins that supplied motive force for all these engines were made of the sinews of animals, twisted raw hide, horsehair rope, and in at least one case, women’s hair.

The models are made from walnut stock and hand carved, giving them a hewn appearance just like their full-scale counterparts. A straight grained, knot-free stock should be chosen for this purpose. All stock sizes should be computed from the drawings before ripping to size. Tools needed are, a file, pins, Amberoid cement, small jeweler’s saw, carving knife and small electric hand drill; a vise and sanding block will also be found useful. If a lathe is not available, wheels may be turned by chucking them in a drill press or hand drill and sanding them to the required diameter.

Tower
Start construction by laying out dimensions on paper tacked to a work board. Cut all cross members and cement them to the uprights, using liberal amounts of cement. Siding strips are then made by cementing the 1/16×1/4-in. pine strips together and trimming them to fit into the required position. Add 3/16-in. sq. braces, dadoing all cross braces.

The sides are now completed and erection of the Tower can begin. Cut 5/8-in. stock to make the base, sanding a slight bevel at the bottom of the uprights to allow for the slant of the sides. Drill holes for the dowels and cement in place. While the cement is drying add the cross members, starting at the top; flooring and wheels can then be added. The drawbridge and roof complete the Tower. For the roof cement 1/16x^x3 in. pine strips together and cut four triangles with a 50° tangent to get the desired height. Develop the roof before cementing it permanently in place. To finish this, and all other models, two coats of clear lacquer are required.

Ballista
Hand-carved walnut stock, in., is used for the base. The 1-in. sq. post is then cemented in place, using 1/8-in. dowels and liberal amounts of cement. Add the angle and post braces after positioning them first for pegs. By using the pattern supplied on the drawings the trigger slides and trigger can easily be cut out. The whole upper assembly attaches to the base by means of a 3/16-in. dowel. Enough play should be given here to allow for tilting of the weapon. Nylon cord supplies the skeins. The amount of tension on the skeins determines the range of the model.

The Ballista is fired by sliding the trigger forward’ until it engages in the bow string. (For clarity the elastic bow string is left out in the drawing.) After engaging the bow string the whole trigger assembly is wound back and the brake pin inserted to prevent trigger from sliding forward. An arrow is inserted and the weapon is now ready to be fired by pressing down on the trigger. The mount rest supplies the necessary elevation.

As all the other models, the Springal is made of walnut stock, hand carved to give it a hewn appearance. The construction is simple, all steps being clearly shown on the drawing. The springboards were cut from 1/16-in. walnut, however, if lemon wood is available this is preferred. Nylon cord around the base secures the springboard.

Scorpion and Catapult
The action of the Catapult and Scorpion are similar, but there is a slight variance in design between the two weapons. The firing power of these engines is derived from the action of the sling which holds the missile. The sling can be made from cloth or soft leather. Engage the trigger in the hook of the sling arm and wind down by using the spanner as winder. Pulling on lanyard releases the sling arm, which in turn fires the small rock contained in the sling. The range is determined by the amount of tension put on the skeins.

The models are not drawn up to any definite scale since even the original weapons varied considerably in size. Depending on the size of the particular props you intend to use, you can arrive at dimensions to best suit your own requirements.

Balsa kits are available for these models. They are manufactured by the Authentic Reproduction Co., New York 60, N. Y., and can be obtained from War Machines, 5 Dairy Lane, Hicksville, N. Y. •