Modern Mechanix
Issue: May, 1930
Posted in: DIY
Tags: cartoons
3 Comments on Animated Cartoons for the Amateur Cameraman (May, 1930)

Animated Cartoons for the Amateur Cameraman (May, 1930) 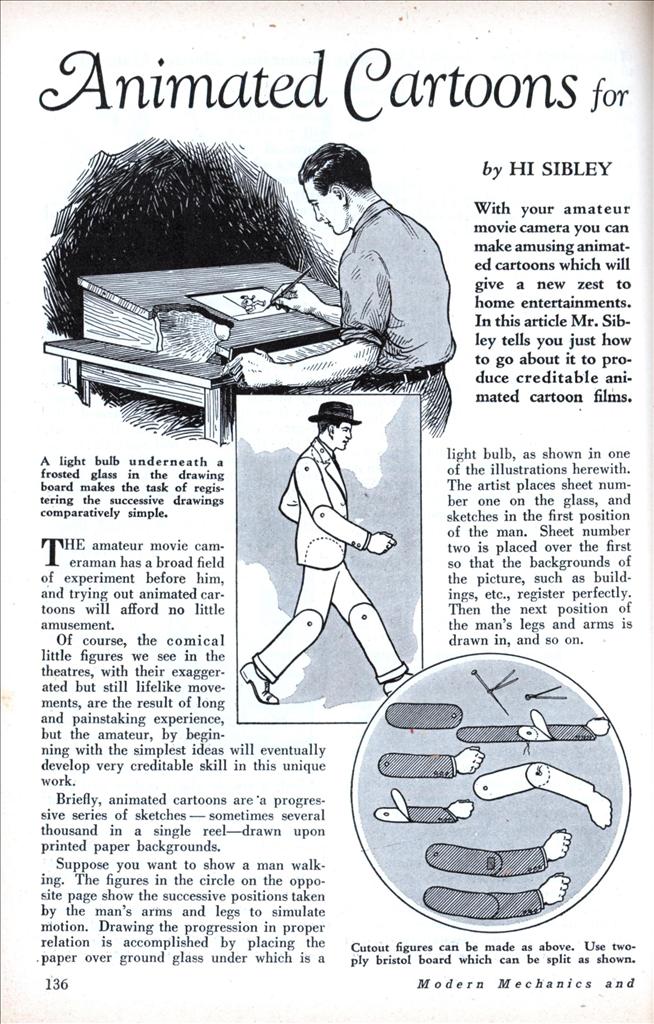 Animated Cartoons for the Amateur Cameraman

With your amateur movie camera you can make amusing animated cartoons which will give a new zest to home entertainments. In this article Mr. Sibley tells you just how to go about it to produce creditable animated cartoon films.

THE amateur movie cameraman has a broad field of experiment before him, and trying out animated cartoons will afford no little amusement.

Of course, the comical little figures we see in the theatres, with their exaggerated but still lifelike movements, are the result of long and painstaking experience, but the amateur, by beginning with the simplest ideas will eventually develop very creditable skill in this unique work.

Briefly, animated cartoons are ‘a progressive series of sketches — sometimes several thousand in a single reel—drawn upon printed paper backgrounds.

Suppose you want to show a man walking. The figures in the circle on the opposite page show the successive positions taken by the man’s arms and legs to simulate motion. Drawing the progression in proper relation is accomplished by placing the paper over ground glass under which is a light bulb, as shown in one of the illustrations herewith. The artist places sheet number one on the glass, and sketches in the first position of the man. Sheet number two is placed over the first so that the backgrounds of the picture, such as buildings, etc., register perfectly. Then the next position of the man’s legs and arms is drawn in, and so on.

This would seem laborious work to carry through several hundred pictures. True, there is considerable work, but on the other hand only the outlines need be drawn, and for brisk action they need not be carefully finished for even the most practiced eye can detect no flaws in a sketch that appears for but a fraction of a second. Dead blacks can be used for coat, hat, hair, etc., but no shading, for unless the shading lines are identical— or as nearly so as the action will permit—the result is a disconcerting blur.

The next stage is photography. The pictures, beginning with No. 1, are laid flat and the camera focused over them. Two exposures, or frames, are made of each cartoon. In commercial practice this makes eight separate pictures to the foot — the total passing in just one second! However, much footage can be gained by taking several exposures where the action slows down, having the man turn his head and look out at the audience with a perplexed expression now and then. This latter action can be used over and over again with the same set of drawings.

For general purposes a standard typewriter sheet, 8-1/2×11 inches, is suitable for the cartoons. This permits figures large enough to be drawn readily. A pen making a broad line, however, should be used, such as a ball point, or better, a regular lettering pen. Blank sheets of paper can be used for the first experiments, or perhaps backgrounds cut out of cardboard.

A simple feature for the beginner is a trick automobile, cut out of cardboard and having wheels, seat, steering gear and driver in separate pieces. This little machine can be made to do all manner of stunts—fall apart, blow up, turn somersaults, etc. Two sets of wheels should be made, one with black shadows on the disks and another plain. By alternating these the wheels will appear to revolve. The shadows, however, should be placed in the same relative position as the wheel advances. Clouds of exhaust smoke, can also be cut out of cardboard, in several sizes, and moved slightly farther from the exhaust pipe with each exposure, increasing the size in the meantime. Cutouts of human figures can also be made in a similar way.

In making cutouts it is important that there be no sharp corners or thin projections, as these have a tendency to curl and cause a shadow on the background. A first class two-ply, pen-and-ink bristol board is satisfactory material.

Cutouts involve considerable work but have this advantage in that they can be used repeatedly. One would think that a walking figure could be made convincing simply by having one leg move regularly in front of the other, in stiff-legged fashion, but on the screen a man would appear to.be blown along, swinging his legs like a pendulum. As a matter of fact, the actual motions of the legs in walking are very little like those we see in cartoons.

Because of its simplicity of outline a swimming fish is one of the easiest items to work out in a lifelike manner. He has no baffling feet to struggle with, and only his mouth, eyes, fins and tail need be animated. Foreshortening the body by gradual degrees makes him appear to turn toward or from the camera, as the case may be, and considerable footage can be gained by having him goggle his eyes and wave his tail, while the body remains stationary. Your fish can be made to swallow a Jonah, turn around, leap out of the water, emit air bubbles, or anything you want him to do with very little trouble. Figures in silhouette always show well in the screen.

For cutout figures running, a moving background is effective. This can be made up as shown on page 137, with graduation along the lower edge to indicate the degree of movement for each exposure. In this case the figure stays in the same place in the frame, legs and arms moving only, while the background is advanced a quarter of an inch for each exposure. Permanent backgrounds of this nature can be worked out in shading, either in lines or wash. They should not be too elaborate, however, for they will detract from the moving figure.

As a rule quadrupeds should be avoided in the beginning, for the amateur has four legs to contend with instead of two—and two are quite enough.

There are an endless number of subjects to experiment with, and as your skill develops you can work out a feature film of amusing incidents that have happened to members .of the family or to friends, and this could be made a splendid entertainment.