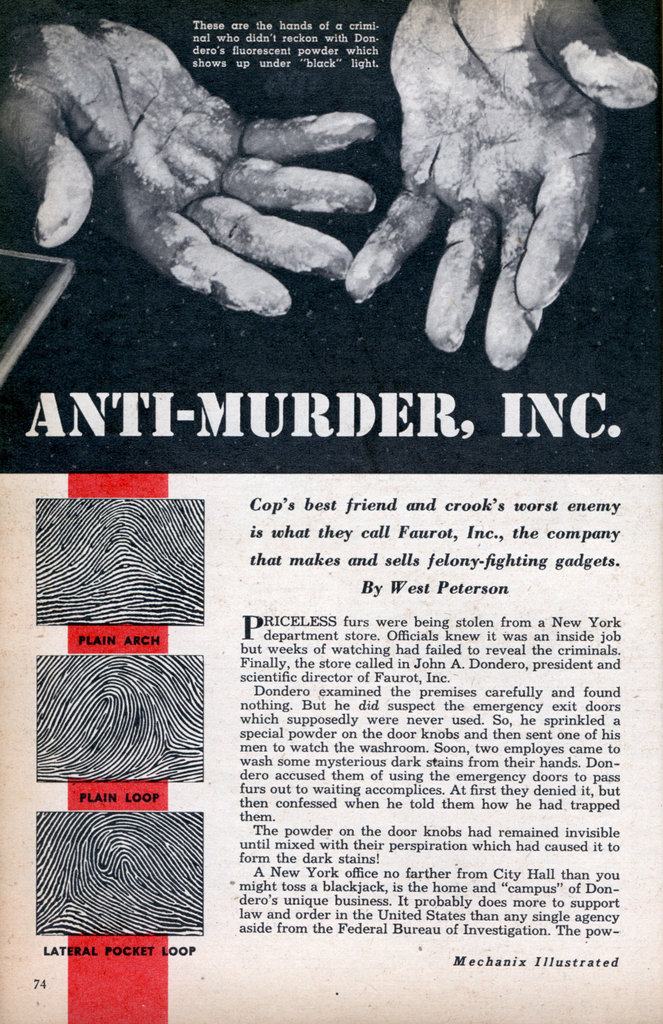 Cop’s best friend and crook’s worst enemy is what they call Faurot, Inc., the company that makes and sells felony-fighting gadgets.

PRICELESS furs were being stolen from a New York department store. Officials knew it was an inside job but weeks of watching had failed to reveal the criminals. Finally, the store called in John A. Dondero, president and scientific director of Faurot, Inc.

Dondero examined the premises carefully and found nothing. But he did suspect the emergency exit doors which supposedly were never used. So, he sprinkled a special powder on the door knobs and then sent one of his men to watch the washroom. Soon, two employes came to wash some mysterious dark stains from their hands. Dondero accused them of using the emergency doors to pass furs out to waiting accomplices. At first they denied it, but then confessed when he told them how he had trapped them.

The powder on the door knobs had remained invisible until mixed with their perspiration which had caused it to form the dark stains!

A New York office no farther from City Hall than you “might toss a blackjack, is the home and “campus” of Dondero’s unique business. It probably does more to support law and order in the United States than any single agency aside from the Federal Bureau of Investigation. The powder used to solve the department store robberies is only one of the many devices the company handles.

Thousands of mysteries are cracked wide open every year by Faurot alumni or by experts using Faurot equipment. A sizable percentage of penitentiary inmates can thank Faurot for their terms in the pokey.

A visit to the firm’s combination showroom, laboratory and lecture hall is like a trip through a chamber of magic.

“Let me take your fingerprints for a personal identity card,” Dondero suggests.

You protest you don’t want to get your digits messed up with ink, but he simply smiles and leads you over to a table.

You roll your fingertips on a small pad, then impress them on a card. The prints come out black and clear. You look at your ringers. They bear no stains whatsoever.

Dondero originated and perfected the inkless method of fingerprinting after years of experimentation. Many police officers consider it the greatest advance of our age in the science of identification.

“The formula is secret,” Dondero explains. “Of course it is on file with the Patent Office in Washington, but our registration doesn’t tell everything. Twenty-two different chemicals go into the manufacture of the pads and the specially sensitized paper which records the prints.”

In police practice, the inkless method is of great value because it overcomes the resistance many persons have to being fingerprinted.

Scores of industrial concerns depended on Faurot, Inc., to fingerprint their employees and issue identification cards during the war. The inkless method made the huge task much easier, particularly with girl workers who were afraid of staining their pinkies or their dresses.

Quite naturally, Dondero is an enthusiastic advocate of universal fingerprinting. He cites a recent case in upstate New York by way of illustrating its value. A nude, partially decomposed body of a woman was dragged out of a river. No one corresponding to her physical measurements had been reported missing, and the chances of making an identification seemed very slim indeed.

Local authorities long-distanced the FBI and gave the victim’s fingerprint classification. In a few hours, word came back that the woman had been employed during the war at a California shipbuilding plant, where her prints were taken. This prompt identification enabled the police to nab the murdererâ€”the lady’s husband, incidentallyâ€”before he could make a getaway.

Dondero and his aides, as well as hospital internes using special kits supplied by Faurot, Inc., have footprinted thousands of new babies. This sure-fire identification, made before the mites even leave the delivery room, prevents infant-mixup tragedies of the sort which have often appeared in newspaper headlines.

Dondero has also worked out vastly improved powders for lifting latent fingerprints found at the scene of the crime. His Analytical Gray powder is for taking prints off glass, Super-sensitive Black for paper, Fixing Brown for waxed containers such as beer cartons, and Super-sensitive White for oiled surfaces like furniture.

Another product is “Print-O-Sol,” a liquid which magically brings out old prints on such difficult surfaces as wrapping paper. Prints as old as 10 years have been taken with this solution.

Dondero recently designed an iodine fuming box for a well-known federal agency, which he prefers not to name. This brings out prints left on documents by sublimating the oil, perspiration or other residual matter left by a crook’s fingertips.

The advantage of the fuming box is that the prints which it develops can, after photographing, be eradicated. Thus a document may be replaced in a file without tipping off a suspect that an investigation is in progress, or may be introduced unblemished in court as state’s evidence.

Dondero, whose zeal surpasses that of a parlor prestidigitator, has plenty of tricks up his sleeveâ€”and in his display case and catalog.

He hands you a banknote and a small brush which has been dipped in a colorless liquid. You inscribe your initials on the bill. When the fluid dries, they are invisible. Dondero switches on his Ultraviolet light and holds the bill under it. The markings leap out at you, bold and clear.

Dondero sprinkles a little powder on another corner of the banknote, then shakes it off. You hold the bill for an instant, then he takes it away. He sticks your fingers under the lampâ€”and the tips which had touched the treated paper look like glowworms in the dark!

Of course, both the liquid and the powder are fluorescent. In conjunction with the black light, they are used to trap extortionists, kidnapers, bribe-taking public officials and landlords, cheating cashiers and embezzling bank tellers.

A hush-hush project of Faurot, Inc., is the application of fluorescent liquid to articles placed on sale in certain large New York department stores. If a customer returns a radio, for instance, and asks for a refund, the merchandise is whisked off to a back room and placed under the black light. Failure of the fluorescent marking to appear means the radio was not purchased at this store but at some other emporium. The customer then is politely told that the refund cannot be made.

The stores which employ this secret marking method save thousands of dollars annually in payments to petty racketeers!

Next, Dondero has the visitor write out a promissory note in ink.

“Now,” he commands, “make alterations by scratching out the original writing with a razor blade, using an eraser, and applying ink-eradicator.”

You do so, changing the signature and date and raising the amount from $100 to $1000. Your forgery is so successful that no evidence of the alterations is visible to the naked eye.

Successful? Hold on a minute!

Dondero dips a brush in bottle marked Grapho-Detector Solution A and runs it lightly over the promissory note. Instantly all the scratches, erasures and eradicator spots turn dark brown. Application of solutions C and D bring out the original writing.

“Now let’s suppose the detective doesn’t want the forger to know his dirty work has been discovered,” Dondero says, dipping his brush in Solution B and applying it to the paper. Presto! The note looked exactly the same as it did before any of the chemicals were used.

These same preparations were employed by an expert in Nassau County, New York, several months ago in helping to convict the infamous “lonely-heart” slayers, Raymond Fernandez and Martha Beck, on first-degree murder charges. Dondero’s products proved invaluable in avenging the deaths of at least two romance-starved widows and the young daughter of one of them.

Grapho-Detector Solution A, incidentally, makes legible the faint impressions on a sheet of paper underneath the sheet in a tablet or telephone pad on which messages and numbers have been jotted. With the aid of this, one of Chicago’s toughest crime riddles was recently solved.

Dondero’s newest development is called the Police Portable Laboratory. This kit is a must for every police organization. Officers using it after a minimum amount of instruction will be able to do the following:

This amazing all-in-one kit bears a price tag of approximately $600, but it provides all the lab facilities required by a small or medium-sized police force and is well worth the taxpayer’s money.

“I’m a lucky man,” Dondero says. “I enjoy my work and at the same time feel that I’m doing something of real benefit to society.”

And, with the possible exception of a few thousand underworld characters, society agrees with him.