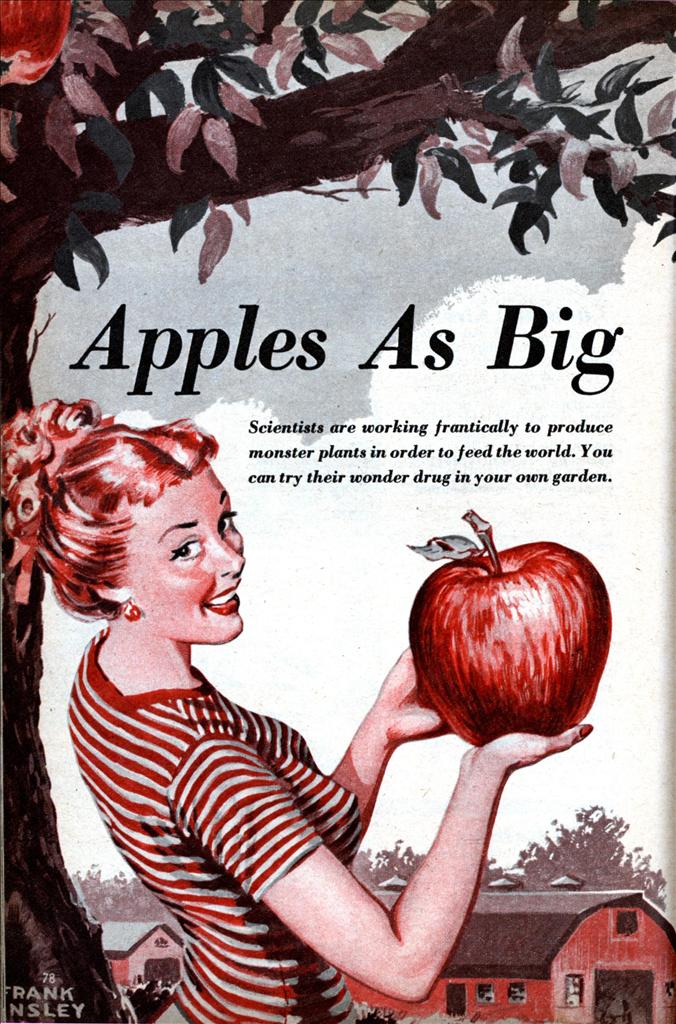 Apples As Big As Your Head!

Scientists are working frantically to produce monster plants in order to feed the world. You can try their wonder drug in your own garden.

HOW’D you like to step out into your backyard and pick a two-pound apple? Or a strawberry as large as a peach? Perhaps you’d prefer to grow roses the size of dahlias. Or, the prospect of biting into an exotic new fruit or vegetable—a pomato or a cucaloupe—might appeal to you.

There’s nothing fantastic about the creation of utterly new, bigger, more flavor-some and nutritious plant foods. Nature is creating them all the time. The trouble is that nature has all the time in the world and if she takes a few million years to turn out a new kind of peach tree it’s nothing to her.

In an ever-hungry world, nature needs” to be given a hotfoot. Evolution must be given better pickup, quicker getaway. And our plant scientists are learning how to do it.

Everything you eat is the end result of evolutionary changes that are still going on as they have for billions of years. Our cereal foods are descendants of plain wild grasses. The Romans, who were supposed to be fabulous banqueters, knew nothing of potatoes, tomatoes, corn or grapefruit. They lived mostly on wheat, olives, grapes, dates, seafoods and now and then humming-bird tongues for variety. Some day our present diet may seem as monotonous as the Romans’.

The secret of evolution is locked up in germ-cells of plants and animals, inside the thread-like particles known as chro- mosomes. Man has finally reached the stage where he is able to effect some wonderful changes in plant chromosomes by relatively simple chemical means. Plant hormones, which stimulate growth and hasten ripening, have proved successful in many instances. And a drug called colchicine shows great promise of opening fantastic paths in plant culture.

All new varieties of plants or animals arise from some alteration in their chromosomes. Such alterations can occur spontaneously. The yellow Delicious apple was an accident that happened some years ago to an isolated tree in West Virginia. The excited nurseryman who found it built a padlocked wire cage around the tree so its chromosomes would be his alone.

Something happened to the chromosomes of a fox, giving it a silvery fur of great beauty. The fabulously expensive fur known as platina is produced by descendants of that fox.

Employees of seedsman David Burpee sniffed seven million marigold plants before they found one free from the pungent odor some people find objectionable. A whole race of odorless marigolds has been bred from the smellproof chromosomes of this parent.

You have as good a chance as anybody of discovering a new oddity that nature chooses to hang upon some plant. Your own garden may produce a plant so superior to old varieties that plant breeders will pay a good sum for it. You may observe some shrub of astounding new virtue while walking through the woods.

It must be admitted, though, that your chances are less than one in a million. That’s why science has been hunting so frantically for artificial methods that’ll do the trick. Colchicine has proved to be one of the most effective methods of giving plant chromosomes a shot in the arm.

Prepared from the roots of the autumn crocus, colchicine is an old drug once used for relieving gout. It has the astonishing ability of preventing division of chromosomes in germ cells, yet of leaving the hereditary factors intact. It results in the number of chromosomes in colchicine-treated plants being doubled. This hopped-up heredity often leads to giant growth.

Even more important, colchicine frequently enables plant hybrids to become capable of reproducing themselves whereas crosses between species are usually sterile.

Seed catalogs list several varieties of colchicine-produced flowers that are bigger and sturdier than their parents. Thousands of home gardeners have raised them successfully. But scientists are more concerned about food crops. Since 1937, when Dr. Albert F. Blakeslee and Amos G. Avery described their work with colchicine, large-scale experiments have been continuous. The aim is not merely giant size, but increased yield of specific plant products— more oil from soybeans, more latex from Russian dandelions and more resins from faster-growing trees.

Colchicine treatment is simple enough to be within the range of any intelligent • gardener. Don’t expect to create a football-sized potato immediately, however. But your experiments with the drug will be rewarding and thrilling.

The drug is listed in the U. S. Pharmacopeia as colchicine alkaloid amorphus. It’s a yellowish powder, extremely poisonous. Great care must be taken not to get it on the skin or in the eyes as it can be very destructive.

The drug sells for about $25 an ounce but an eighth of an ounce will be enough for many experiments. Water solutions of 0.1 per cent and 0.4 per cent are the strengths most commonly used and a one or 2-per cent mixture of colchicine in lanolin gives a paste for direct application to growing tissue. There are no fixed dosages for plants; the general rule is that too-strong applications prevent growth, too-weak ones merely daze the plant. One of the simplest methods of application is to soak seeds in colchicine solution between four and ten days, trying both weak and strong solutions. Use a very shallow dish so the seeds can get oxygen. Another way is to dig up seedlings when they reach the two-leaf stage, tie them gently into bundles and immerse them top down in a dish containing colchicine solution for from four to 24 hours. Keep the roots moist and set the seedlings into flats immediately after treatment.

A camel’s hair brush can be used to apply colchicine solution in its weaker strength to tip buds of larger plants. This should be repeated several times at short intervals. A drop of the solution can be placed on the growing tip of seedlings three or four times at about six-hour intervals. Daubing on a single application of the stronger lanolin paste may do as well. Water solutions sprayed on by a fine atomizer can also be used.

You’ll probably have a problem recognizing what you’ve got when you finally get it. Plants in which your chemical wizardry has taken, will probably disappoint you by their misshapen, unattractive ap- pearance. Plant tissue poisoned by colchicine grows at a different rate from ordinary tissue. As the plant recovers, it looks pretty much like any other organism shaking off a hangover: generally undesirable. Often it’ll have rough, crumpled leaves, thicker stems and greater height. The real benefits of doubling the chromosomes won’t show up until the next generation.

With colchicine you might even be able to double the speed of growth of young shrubs and trees around your house. Nurseries calculate that their stock doubles in value with each year’s growth. So, if you can grow a 20-year-old oak tree in ten years, you have a tidy profit in your front yard.

Professor Earl H. Newcomer of the University of North Carolina doubled the growth speed of young oaks and chestnut trees and hazelnut bushes. He placed one drop of 0.4 per cent colchicine solution on the growing points of the trees each day. Some of the seedlings died, but those that didn’t started living really fast lives. Since many of our most important money crops like nuts and fruits come from trees, the commercial importance of a method that would cut the [Continued on page 145] growing time in half is obvious! Colchicine interferes with cell division in animals just as it does in plants. That’s why you must handle it with extreme caution. Dr. John H. Van Dyke and Dr. M. G. Ritchey of Washington University School of Medicine injected the drug into the bodies of young white rats before birth. Queer monstrosities with large growth of some parts of the body resulted.

However, the ability of the drug to check cell division may have future medical applications. Cancer, for instance, is a disease of wild and uncontrolled cell growth. Intensive studies of colchicine are being pursued at the Hickrill Laboratory for basic chemical research in Katonah, N. Y.

No expedient way has been found to introduce colchicine into the fertilized eggs of mammals where it can act upon heredity factors. It’s unlikely that the drug can ever be used to make a mouse as big as a rat.

But the situation is different with egg-laying species such as poultry and fish. In fact, injections of colchicine into fertilized chicken eggs have resulted in combs and wattles twice the normal size and greatly enlarged tail feathers in roosters. Dr. Blakeslee has also been applying colchicine treatments to trout eggs. A trout the size of a halibut would equal the dimensions of “the one that got away.”

While colchicine poisons the plant and juggles heredity, plant hormones stimulate growth and encourage blossoms to develop into fruit more rapidly than if left to their own devices. Hormone treatments, now used mostly on flowers and fruits, may prove to be just as applicable to the major field crops which feed the world.

Another method of increasing the size of your crops is still a long way from general use—radioactive bombardment of genes. But persistence—the kind that thinks nothing of smelling seven million marigolds—will probably turn up interesting, perhaps spectacular results eventually.

Maybe you’d call a vegetable with a carrot for a mother and a beet for a father a grocer’s nightmare. But in Holland, they’re actually raising these hybrids. They call them “wobblies.” New taste sensations, not to mention nourishment, may very well be provided by such extraordinary foods as whoats, cabbi-flower, potarrots and pumpmelon!

It’s only the beginning, but it’s clear that science is getting closer and closer to the secrets of controlled evolution. And there’s little doubt that when a real measure of control is developed, such things as apples as big as your head will be common-place sights.