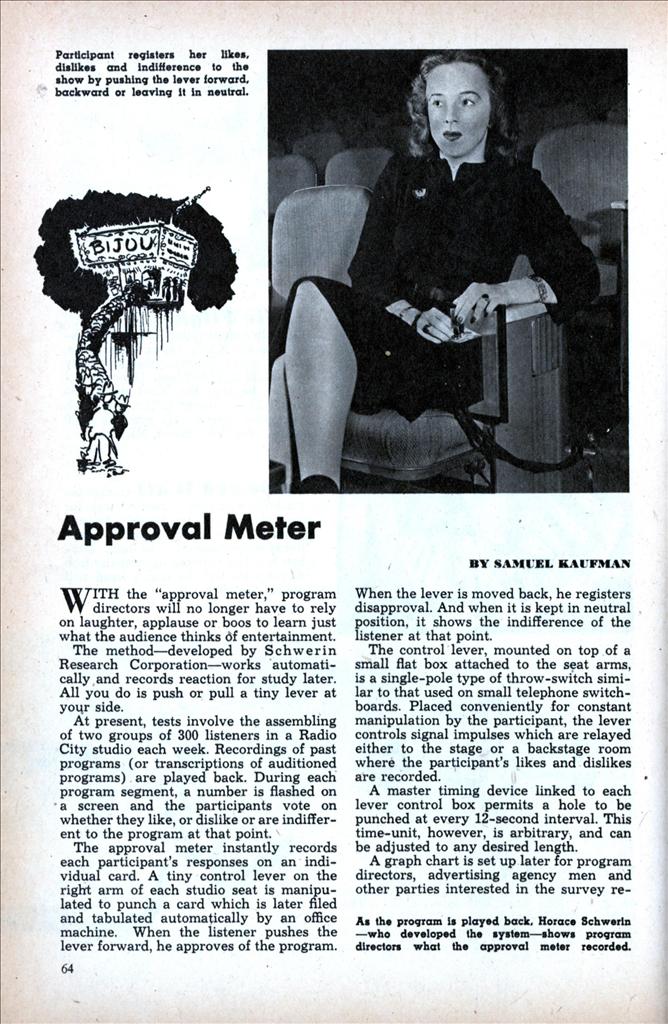 WITH the “approval meter,” program directors will no longer have to rely on laughter, applause or boos to learn just what the audience thinks of entertainment.

The method—developed by Schwerin Research Corporation—works automatically and records reaction for study later. All you do is push or pull a tiny lever at your side.

At present, tests involve the assembling of two groups of 300 listeners in a Radio City studio each week. Recordings of past programs (or transcriptions of auditioned programs) are played back. During each program segment, a number is flashed on a screen and the participants vote on whether they like, or dislike or are indifferent to the program at that point.

The approval meter instantly records each participant’s responses on an individual card. A tiny control lever on the right arm of each studio seat is manipulated to punch a card which is later filed and tabulated automatically by an office machine. When the listener pushes the lever forward, he approves of the program.

When the lever is moved back, he registers disapproval. And when it is kept in neutral position, it shows the indifference of the listener at that point.

The control lever, mounted on top of a small flat box attached to the seat arms, is a single-pole type of throw-switch similar to that used on small telephone switchboards. Placed conveniently for constant manipulation by the participant, the lever controls signal impulses which are relayed either to the stage or a backstage room where the participant’s likes and dislikes are recorded.

A master timing device linked to each lever control box permits a hole to be punched at every 12-second interval. This time-unit, however, is arbitrary, and can be adjusted to any desired length.

A graph chart is set up later for program directors, advertising agency men and other parties interested in the survey re- suits. The chart is marked off, left to right, in numerals designating minutes. Then, the same recording voted on by the test audience is played back.

Careful selection and pairing of turntable and chart motors assure adequate synchronization. Variations between -the turntable speed and the mechanical pointer’s rate of motion have been so slight as to be considered negligible. However, Schwerin’s engineers are prepared to employ a common motor for both the turntable and the chart should any synchronization difficulties arise.

Consumer polls are being used today in virtually every industry to determine the opinions of the public on various products and commercial services. Inventive genius has contributed much to the successful handling of such “sampling” polls, much of the work being done by mechanical and electronic means.

Customary office equipment such as telephones, typewriters, calculating machines and dictaphones have been used in such polls for a long time. But Schwerin’s is the first device especially designed for the efficient registering and exhibiting of public preferences.

Although the approval meter shown here was primarily designed for radio, the method is applicable to any entertainment.