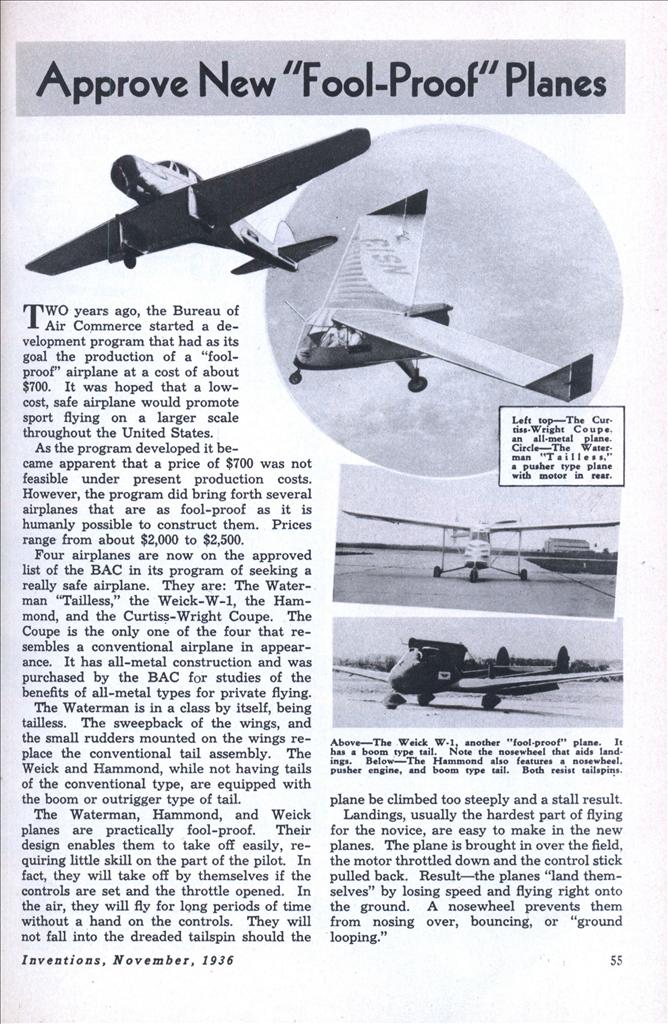 TWO years ago, the Bureau of Air Commerce started a development program that had as its goal the production of a “foolproof” airplane at a cost of about $700. It was hoped that a low-cost, safe airplane would promote sport flying on a larger scale throughout the United States.

As the program developed it became apparent that a price of $700 was not feasible under present production costs. However, the program did bring forth several airplanes that are as fool-proof as it is humanly possible to construct them. Prices range from about $2,000 to $2,500.

Four airplanes are now on the approved list of the BAC in its program of seeking a really safe airplane. They are: The Waterman “Tailless,” the Weick-W-1, the Hammond, and the Curtiss-Wright Coupe. The Coupe is the only one of the four that resembles a conventional airplane in appearance. It has all-metal construction and was purchased by the BAC for studies of the benefits of all-metal types for private flying.

The Waterman is in a class by itself, being tailless. The sweepback of the wings, and the small rudders mounted on the wings replace the conventional tail assembly. The Weick and Hammond, while not having tails of the conventional type, are equipped with the boom or outrigger type of tail.

The Waterman, Hammond, and Weick planes are practically fool-proof. Their design enables them to take off easily, requiring little skill on the part of the pilot. In fact, they will take off by themselves if the controls are set and the throttle opened. In the air, they will fly for long periods of time without a hand on the controls. They will not fall into the dreaded tailspin should the plane be climbed too steeply and a stall result.

Landings, usually the hardest part of flying for the novice, are easy to make in the new planes. The plane is brought in over the field, the motor throttled down and the control stick pulled back. Result—the planes “land themselves” by losing speed and flying right onto the ground. A nosewheel prevents them from nosing over, bouncing, or “ground looping.”