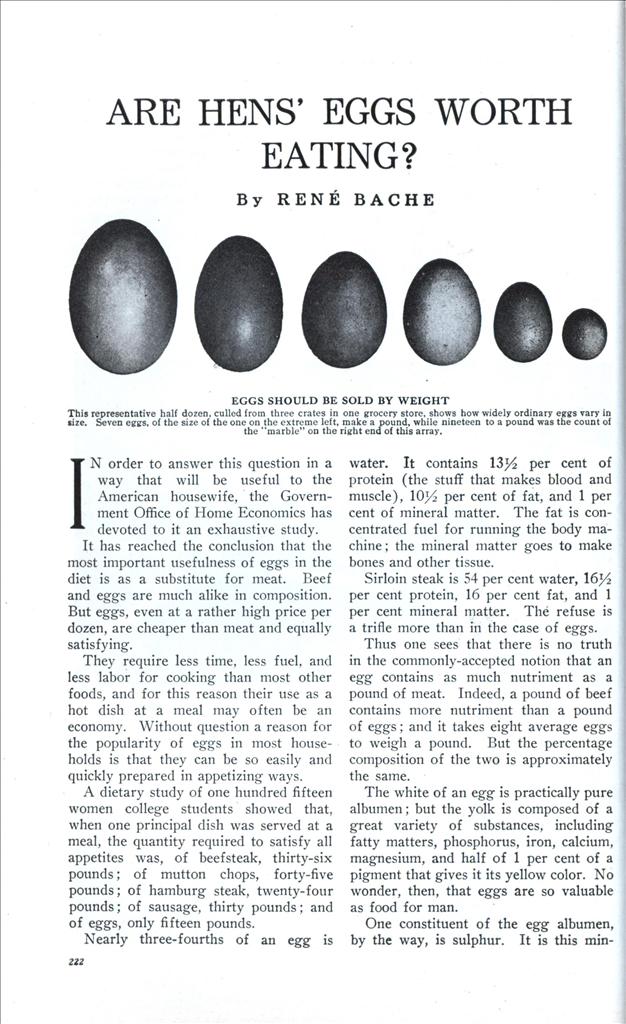 ARE HENS’ EGGS WORTH EATING?

IN order to answer this question in a way that will be useful to the American housewife, the Government Office of Home Economics has devoted to it an exhaustive study.

It has reached the conclusion that the most important usefulness of eggs in the diet is as a substitute for meat. Beef and eggs are much alike in composition. But eggs, even at a rather high price per dozen, are cheaper than meat and equally satisfying.

They require less time, less fuel, and less labor for cooking than most other foods, and for this reason their use as a hot dish at a meal may often be an economy. Without question a reason for the popularity of eggs in most households is that they can be so easily and quickly prepared in appetizing ways.

A dietary study of one hundred fifteen women college students showed that, when one principal dish was served at a meal, the quantity required to satisfy all appetites was, of beefsteak, thirty-six pounds; of mutton chops, forty-five pounds; of hamburg steak, twenty-four pounds; of sausage, thirty pounds; and of eggs, only fifteen pounds.

Sirloin steak is 54 per cent water, 16-1/2 per cent protein, 16 per cent fat, and 1 per cent mineral matter. The refuse is a trifle more than in the case of eggs.

Thus one sees that there is no truth in the commonly-accepted notion that an egg contains as much nutriment as a pound of meat. Indeed, a pound of beef contains more nutriment than a pound of eggs; and it takes eight average eggs to weigh a pound. But the percentage composition of the two is approximately the same.

The white of an egg is practically pure albumen; but the yolk is composed of a great variety of substances, including fatty matters, phosphorus, iron, calcium, magnesium, and half of 1 per cent of a pigment that gives it its yellow color. No wonder, then, that eggs are so valuable as food for man.

One constituent of the egg albumen, by the way, is sulphur. It is this mineral element that stains the egg-spoon black—the sulphur combining with silver to form a sulphide of the latter metal.

The housewife prefers eggs that have yolks of a deep-yellow color. She thinks that they give to her cake or custard more richness. Nor is her idea on this point without reason ; for such yolks have a higher flavor.

This desirable color, it appears, is contributed chiefly by green feed. If hens have not enough of this kind of feed, the yolks of the eggs they lay will be of a pale tint. This is a useful hint for producers who cater to the “fancy” market, where deep-colored yolks are at a premium.

The fancy market also demands eggs whose whites shall, when cooked, be as white as possible, and not tinged with color. It is even important that the whites shall match. The head-waiter in a high-class restaurant nowadays would make a row in the kitchen if two poached eggs were served to one of his patrons, one of them clear white and the other greenish-white or yellowish-white.

These of course are mere details, but they have market importance. In New York City, by the way, eggs with white shells command five cents more a dozen than brown – shelled eggs. In Boston it is the brown eggs that fetch a higher price. But the notion, entertained by many people, that brown eggs have a richer flavor is pure nonsense.

When eggs are whipped, air is beaten into them; and, when the beaten eggs are added to dough, the air-bubbles are distributed through the mass. When the dough is cooked, the inclosed air expands, the result being a porous structure. Angel cake affords a familiar illustration. It is interesting to note that recipes for cakes today call for fewer eggs than a generation ago. This is because the housewife, having baking-powder at hand, relies less upon eggs to make her cakes light. She uses only enough of them to give the desired flavor, color, and texture.

There are a number of so-called “egg-substitutes” on the market, some of which are made from casein and albumen mixed with a little flour. Others are mixtures of animal or vegetable fats with albumen and starch. Yet others are mainly starch colored yellow, and are advertised for the compounding of custards and puddings.

Vast quantities of eggs are now sent to market without shells, frozen or dried —the object in either case being to preserve them. For this purpose the “egg- breaking” concerns buy eggs of grades which usually are no longer fit for food. Only those actually rotten are rejected, and the fluid product is strained before being dried or frozen.

The great manufacturers of biscuits and other such products use these dried and frozen eggs on an enormous scale, paying for them a small fraction of the cost of fresh eggs. Thus they enter into daily consumption by a majority of all the people in this country.

In the matter of heat producing, the average egg lags slightly behind a glass of fairly rich milk.