Popular Science
Issue: May, 1941
Posted in: Architecture, War
3 Comments on Are Skyscrapers Bombproof? (May, 1941) 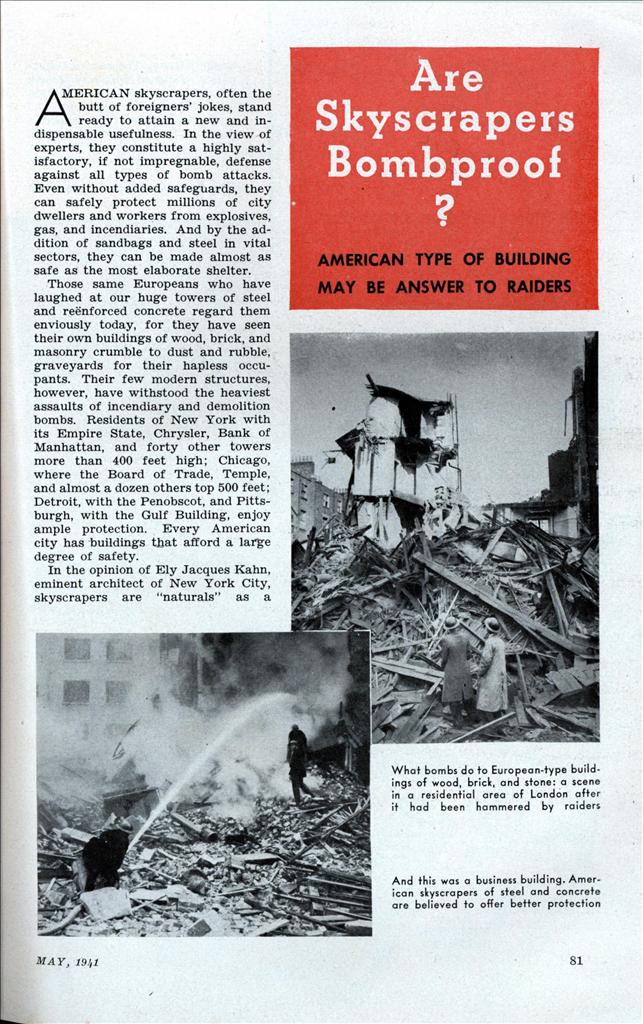 American Type of Building May Be Answer to Raiders

AMERICAN skyscrapers, often the butt of foreigners’ jokes, stand ready to attain a new and indispensable usefulness. In the view of experts, they constitute a highly satisfactory, if not impregnable, defense against all types of bomb attacks. Even without added safeguards, they can safely protect millions of city dwellers and workers from explosives, gas, and incendiaries. And by the addition of sandbags and steel in vital sectors, they can be made almost as safe as the most elaborate shelter.

Those same Europeans who have laughed at our huge towers of steel and reenforced concrete regard them enviously today, for they have seen their own buildings of wood, brick, and masonry crumble to dust and rubble, graveyards for their hapless occupants. Their few modern structures, however, have withstood the heaviest assaults of incendiary and demolition bombs. Residents of New York with its Empire State, Chrysler, Bank of Manhattan, and forty other towers more than 400 feet high; Chicago, where the Board of Trade, Temple, and almost a dozen others top 500 feet; Detroit, with the Penobscot, and Pittsburgh, with the Gulf Building, enjoy ample protection. Every American city has buildings that afford a large degree of safety.

In the opinion of Ely Jacques Kahn, eminent architect of New York City, skyscrapers are “naturals” as a bomb defense. The common demolition bomb of 550 pounds will penetrate a maximum of eight stories through a steel roof and steel and reenforced concrete floors. With the added protection of sandbags the penetration may be limited to three floors. The most powerful explosive, upon hitting the street, will not hurl fragments able to penetrate modern walls higher than three stories. Poison gas cannot rise more than two or three floors above street level. Incendiaries, weighing only a few pounds, may not penetrate even through a modern building’s roof. Even if they do, they must burn through almost completely fireproof floors and walls.

Refugees in a skyscraper, then, provided they remain three floors above the street and five or six floors below the roof, are safe from anything except a direct hit which may be directed at them slantwise. For bombs never fall straight; they strike whatever is in their path at an angle. Experience abroad, however, has shown that even a hit like this is a minor catastrophe. It will undoubtedly kill or wound persons sheltered at that level. Striking at the 25th floor, for example, it may penetrate diagonally down to the 20th, killing and maiming en route. But the building’s steel frame is flexible; it will take the shock without collapsing.

No surface structure, modern or otherwise, can be made impervious to a direct hit except at terrific cost, and it is likely that skyscrapers will have to continue to take that risk. Important safeguards such as sandbagging on the top floors, placing sandbags between floors and windows to protect against flying fragments, and bracing windows or covering them with metal sheets, will add greatly to the general safety.

The skyscraper’s defense role however is not limited to protection alone. Military experts concede that the heavily reenforced roofs would easily support antiaircraft-gun emplacements, and shelters for gun crews.

Unique and permanent underground shelters may be the solution in our cities’ most crowded areas. In emergencies they may be used as shelters for almost indefinite periods, completely equipped with food-storage, sanitary, and dormitory facilities; power units for lighting, heating, and ventilating; and ample ingress and egress motorways. A seven-foot layer of reenforced concrete, and reenforced concrete walls, would give them protection against demolition bombs.

In time of peace these subterranean palaces, acres in area, may be transformed into useful civic projects. Thousands of automobiles may find storage and parking space there, new municipal markets, theaters, skating rinks, swimming pools, gymnasiums, auditoriums, and schools may be located there, far from dirt, noise, and traffic.

Ely Jacques Kahn together with his partner, Robert Allan Jacobs, has even envisaged these combination war-and-peace villages as the modern answer to the problem of slum clearance. Mr. Kahn is famous for the designing of many of New York’s best-known buildings and department stores, such as the Squibb Building, 120 Wall Street, Bon-wit Teller, Bergdorf-Goodman, and Jay Thorpe. Slums, he says, are peacetime hazards; they are worse in wartime. Raze them, therefore, and in their stead erect vast areas of parks, playgrounds, and apartment houses, with permanent shelters beneath them.