Mechanix Illustrated
Issue: Aug, 1950
Posted in: Ahead of its time, Automotive
1 Comment on Are These GM’s Cars of Tomorrow? (Aug, 1950)

Wow, this one comes with a robot! 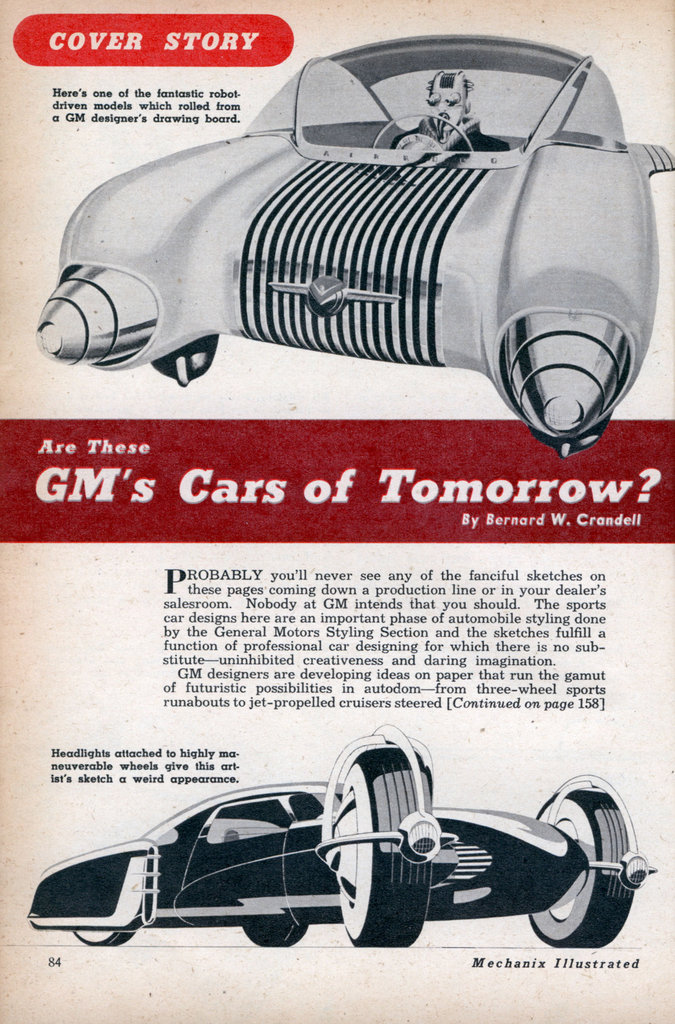 Are These GM’s Cars of Tomorrow?

PROBABLY you’ll never see any of the fanciful sketches on these pages coming down a production line or in your dealer’s salesroom. Nobody at GM intends that you should. The sports car designs here are an important phase of automobile styling done by the General Motors Styling Section and the sketches fulfill a function of professional car designing for which there is no substituteâ€”uninhibited creativeness and daring imagination.

GM designers are developing ideas on paper that run the gamut of futuristic possibilities in autodomâ€”from three-wheel sports runabouts to jet-propelled cruisers steered down the highway with a radarscope. Some hug the road so tightly that the tops of the wheels are higher than the driver’s head. Others are replicas of some of the world’s well-known fighter planesâ€”P-38 Lightnings, P-51 Mustangs and both U. S. and British jet jobs.

Fantastic? Certainly not. Aviation’s influence on car styles has long been noted, for airplanes symbolize the speed, trimness of line and streamlining that car owners want in their own vehicle. Perhaps a vertical stabilizer here or a jet air intake there will be translated by the automobile stylists into a tail fin or decorative chrome trim for the leading edge of the rear fender.

The designers of these super-duper sports models work without any thought of engineering restrictions or practicality. They have not been told “you can’t do this because. . .” They live in the world of the future, when atomic engines and new engineering principles permit entirely new concepts of styling.

Sketches of the designer’s dream are dashed off in pencil on ordinary pieces of white writing paper or yellow copy paper well-known to the newspaper trade. If the designer has a really new idea, he may be told to make a water color rendering of it, dressing it up in color and painstaking detail to achieve the ultimate effect. From here on, the mortality rate of designs increases for the next step is an expensive one.

Harley J. Earl, Chief of GM Styling, orders only a few renderings to be made up into plaster models, scaled to the proportions of an ordinary automobile. These plaster models, painted and brimmed into beautiful miniatures of what life-size versions would be, are then available for study by the executives of the five GM car divisions.

Never has one of the plaster models been accepted in its entirety for a future production model. But, it might be a strikingly handsome bumper-grille, or a sweeping fender line on one of the sizzling little jobs that strikes the eye of a car-division boss. That one feature might be what he wants on his 1954 model.

So, look carefully at the sketches on pages 84-and 85. There might be something there you will recognize on a new GM model several years from now.