Modern Mechanix
Issue: Sep, 1934
Posted in: Automotive
No Comments on Are you Driving a Pleasure Car or Death Trap? (Sep, 1934) 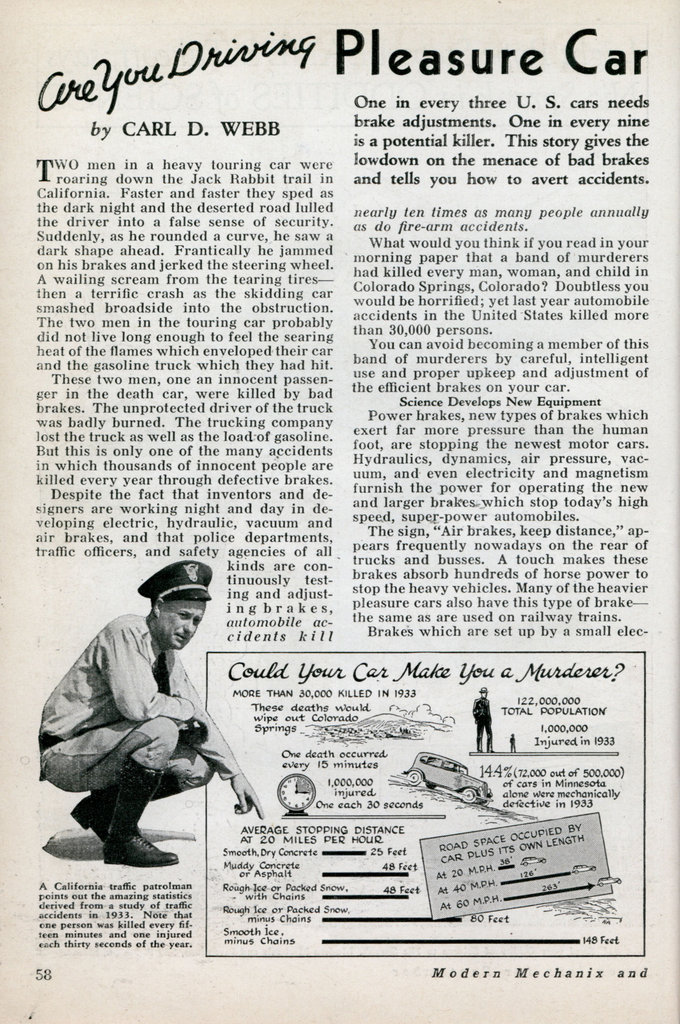 Are you Driving a Pleasure Car or Death Trap?

One in every three U. S. cars needs brake adjustments. One in every nine is a potential killer. This story gives the lowdown on the menace of bad brakes and tells you how to avert accidents.

TWO men in a heavy touring car were roaring down the Jack Rabbit trail in California. Faster and faster they sped as the dark night and the deserted road lulled the driver into a false sense of security. Suddenly, as he rounded a curve, he saw a dark shape ahead. Frantically he jammed on his brakes and jerked the steering wheel. A wailing scream from the tearing tiresâ€” then a terrific crash as the skidding car smashed broadside into the obstruction. The two men in the touring car probably did not live long enough to feel the searing heat of the flames which enveloped their car and the gasoline truck which they had hit.

These two men, one an innocent passenger in the death car, were killed by bad brakes. The unprotected driver of the truck was badly burned. The trucking company lost the truck as well as the load of gasoline. But this is only one of the many accidents in which thousands of innocent people are killed every year through defective brakes. Despite the fact that inventors and designers are working night and day in developing electric, hydraulic, vacuum and air brakes, and that police departments, traffic officers, and safety agencies of all kinds are continuously testing and adjusting brakes, automobile accidents kill nearly ten times as many people annually as do fire-arm accidents.

What would you think if you read in your morning paper that a band of murderers had killed every man, woman, and child in Colorado Springs, Colorado? Doubtless you would be horrified; yet last year automobile accidents in the United States killed more than 30,000 persons.

You can avoid becoming a member of this band of murderers by careful, intelligent use and proper upkeep and adjustment of the efficient brakes on your car.

The sign, “Air brakes, keep distance,” appears frequently nowadays on the rear of trucks and busses. A touch makes these brakes absorb hundreds of horse power to stop the heavy vehicles. Many of the heavier pleasure cars also have this type of brakeâ€” the same as are used on railway trains.

Brakes which are set up by a small electric motor on each wheel are being tested; but the newest power brake is one involving magnetic principles. A ring-shaped electromagnet is attached to the ends of the brake band and a soft iron armature is attached to the brake drum. When a small amount of electricity from the car’s storage battery energizes the electro-magnet, it grips the armature which is forced to revolve a fraction of a revolution. This sets up the brake band on the drum and quickly stops the vehicle.

This brake is especially useful on truck and trailer trains. Because electricity actuates the brake system, there is no time lag between the setting up of the truck brakes and the trailer brakes, thus preventing the trailer from over-riding the truck. The controller of this brake merely determines the amount of current sent to the magnets. For this reason it may be operated by a little lever near the steering wheel. A touch of the finger on this lever will stop almost instantly the heaviest truck and trailer train. Like most of the power brakes, although the electric brake, was originally designed for truck use, its ease of operation, simplicity of construction, and its quick, powerful stopping action is rapidly bringing it into favor for pleasure cars.

Although the brake equipment on any new modern car will stop it in a fraction of the legal stopping distance, tests of millions of cars on the highways of the United States show that one in three of the autos being operated needs some adjustment of the brakes. and that one in nine is so bad that it cannot stop within the required limit.

In how short a distance can you stop your car? Most states have prescribed by law a certain legal limit for your shortest stopping distance. In California, you must be able to stop your car within thirty-seven feet from a speed of twenty miles per hour on clean, dry, level, concrete pavement. This is an unusually lenient figure. Most modern cars equipped with four wheel brakes, even if they are not power brakes, will stop within twenty feet under the same conditions; and if the brakes are unusually good, it is possible to stop within a distance of nine or ten feet.

But do not use these figures as a basis from which to estimate when to apply the brake! Many other factors influence the distance you require to stop. “Reaction time”â€”the time you take to estimate the situation, to command your foot to press the brake pedal, and finally to do it, may lengthen your stop considerably.

This reaction time varies with different individuals and with the same individual at different times. It is often as long as one-half second. During this time, at fifty miles an hour, you will travel about thirty-seven feet before your brakes begin to slow you down.

The surface of the roadway influences the shortest stopping distance a great deal. Tests have shown the following variations in stopping distances when brakes are adjusted to stop the car in about twenty-five feet from twenty miles per hour on smooth, dry concrete:

On muddy concrete or asphalt. . .48 feet

Remember that your stopping distance increases as the square of the speed of your car! That is, with the same brakes, if you need only twenty-five feet to stop from twenty miles per hour, at twice that speed you will need four times the distance, or one hundred feet, to stop. Thus if you are foolish enough to go forty or fifty miles per hour on a smooth, ice-covered pavement, you may travel six hundred feet or moreâ€”as far as a whole city blockâ€”before you stop, if you do not skid into something and crash first!

Most automobile drivers keep their cars safe by repairing their brakes as soon as they become worn. But this should be done immediately. Brake testing officers have recorded many accidents which occurred after the driver had been warned that his brakes were weak. Such a case occurred recently

when a test showed that a light truck’s brakes required more than fifty feet to stop from a speed of twenty miles per hour. The officers cited the driver to have his brakes repaired and retested and he drove away. Within a mile, his soft brakes allowed him to roll onto a railroad track in the path of an oncoming train which hit the truck and killed the driver.

It is not necessary to wait for traffic officers to test your brakes in order to know their condition. If you have to use your emergency brake frequentlyâ€”if you roll a few feet across the line when the signal turns redâ€”if you often hit the other fellow’s bumper when parkingâ€”your brakes are not quite good enough.

“The first thing a locomotive engineer does when he gets into the cab is to test his air,” an engineer says. “Is your life any more valuable than his? Then test your brakes every time you start out from your garage. You do not need to do this at a high speed. If you can slide all your tires from any speed at all, your brakes are all right.”

You can avail yourself of various means of keeping informed of the condition of your brakes. But in the final analysis, regardless of electric or air brakes, regardless of official brake tests, or of unofficial “safety lane” tests, the use of your brakes in an emergency is up to you. Only the driver can decide when to apply his brakes in order to avoid an accident.