Modern Mechanix
Issue: Aug, 1934
Posted in: Automotive
No Comments on ARE YOU FIT to DRIVE an Automobile? (Aug, 1934) 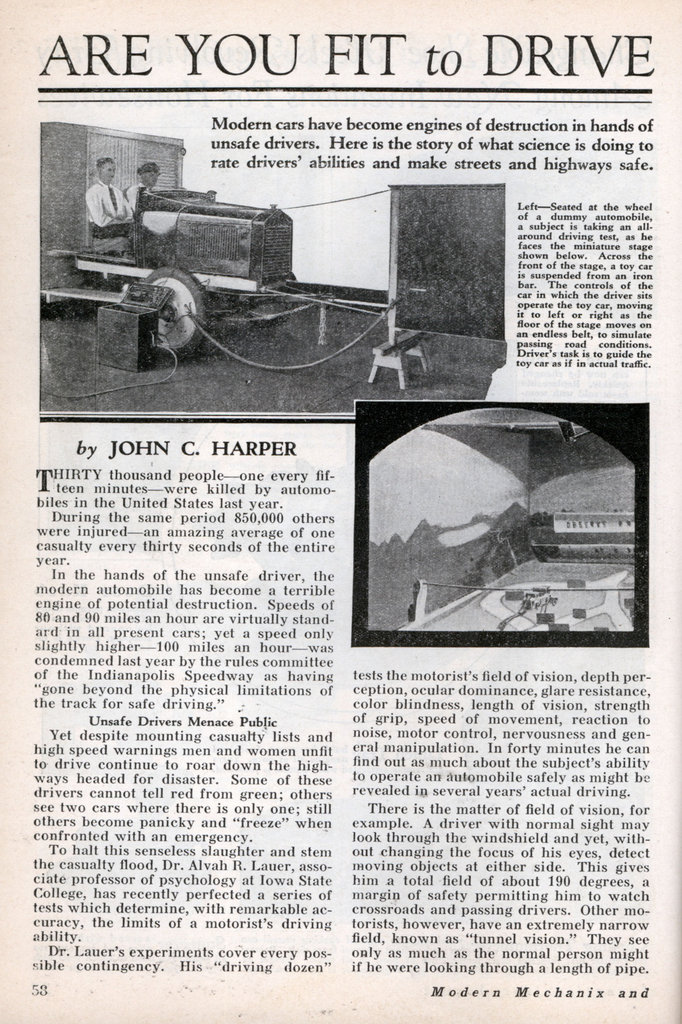 ARE YOU FIT to DRIVE an Automobile?

Modern cars have become engines of destruction in hands of unsafe drivers. Here is the story of what science is doing to rate drivers’ abilities and make streets and highways safe.

During the same period 850,000 others were injuredâ€”an amazing average of one casualty every thirty seconds of the entire year.

In the hands of the unsafe driver, the modern automobile has become a terrible engine of potential destruction. Speeds of 80 and 90 miles an hour are virtually standard in all present cars; yet a speed only slightly higherâ€”100 miles an hourâ€”was condemned last year by the rules committee of the Indianapolis Speedway as having “gone beyond the physical limitations of the track for safe driving.”

Yet despite mounting casualty lists and high speed warnings men and women unfit to drive continue to roar down the highways headed for disaster. Some of these drivers cannot tell red from green; others see two cars where there is only one; still others become panicky and “freeze” when confronted with an emergency.

To halt this senseless slaughter and stem the casualty flood, Dr. Alvah R. Lauer, associate professor of psychology at Iowa State College, has recently perfected a series of tests which determine, with remarkable accuracy, the limits of a motorist’s driving ability.

Dr. Lauer’s experiments cover every possible contingency. His “driving dozen” tests the motorist’s field of vision, depth perception, ocular dominance, glare resistance, color blindness, length of vision, strength of grip, speed of movement, reaction to noise, motor control, nervousness and general manipulation. In forty minutes he can find out as much about the subject’s ability to operate an automobile safely as might bo revealed in several years’ actual driving.

There is the matter of field of vision, for example. A driver with normal sight may look through the windshield and yet, without changing the focus of his eyes, detect moving objects at either side. This gives him a total field of about 190 degrees, a margin of safety permitting him to watch crossroads and passing drivers. Other motorists, however, have an extremely narrow field, known as “tunnel vision.” They see only as much as the normal person might if he were looking through a length of pipe.

Dr. Lauer tests the field by placing a large cardboard protractor in a horizontal position in front of the driver’s eyes with the center of the flat edge at the bridge of the nose. While the driver’s gaze is focused straight ahead, a pencil is moved along the curved edge of the protractor from front to back until it passes out of the driver’s sight. The points of disappearance on either side give the measurement of the field.

The reader can test his own field of vision in a rough way by focusing his eyes on some object directly in front of him and wiggling his fingers at each side of his head. If he can see them when they are well to the side, he can be reasonably sure that his field is about normal. Dr. Lauer’s tests have shown that a field of less than 140 degrees is dangerous for the motorist.

To test for this failing, Dr. Lauer uses a metal instrument shaped like a flattened cone. The driver looks with both eyes through the large end while the examiner moves a pencil back and forth at the other end. The driver is required to focus on the pencil. If he does this to the right of a center sight on the instrument, his left eye is dominant, and vice versa.

Dr. Lauer uses what is known as a “glare-ometer” to test the driver’s resistance to sun and headlight glare. The instrument consists of a light behind a circular, frosted glass and a diffusing lens. In the center of the glass is the word “out” printed plainly on a white background which is impervious to light. As the intensity of the light is increased the probationer is required to say “out” when the word goes out to him.

The Ishihara test is used for color blindness. This consists of a series of circular areas made up of colored dots so arranged that one numeral is read by the normal eye while another is seen by the person suffering from color blindness. Ten per cent of men and one per cent of women drivers are blind to this combination of colors.

Following the examination of vision the driver’s strength of grip is tested, an important test because of the power required to hold a car in the road in case of a blowout.