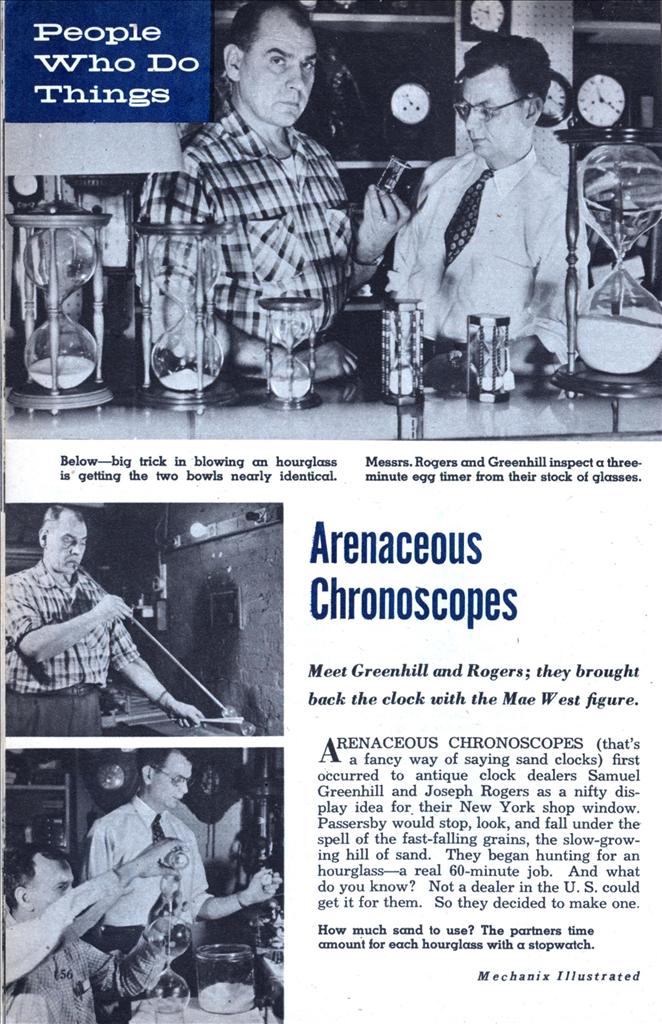 Meet Greenhill and Rogers; they brought back the clock with the Mae West figure.

Arenaceous chronoscopes (that’s a fancy way of saying sand clocks) first occurred to antique clock dealers Samuel Greenhill and Joseph Rogers as a nifty display idea for their New York shop window. Passersby would stop, look, and fall under the spell of the fast-falling grains, the slow-growing hill of sand. They began hunting for an hourglass—a real 60-minute job. And what do you know? Not a dealer in the U. S. could get it for them. So they decided to make one.

And what do you know? They couldn’t find anyone here or in Europe who could tell them how. The art had been dead for over a century.

Out of this dead-end Greenhill and Rogers have built themselves a nice little business. As the only people living with hourglass know-how, they have attracted many customers who need hourglasses as symbols, trademarks or props—like TV quiz programs and news analysts.

The first experimental glasses they made were crude and undependable. They spent months finding sand that wouldn’t clog. Then there was the problem of blowing the two bowls enough alike so that the sand would flow out of either bowl in the desired time. How do they make a glass for exactly one hour? They don’t—they make the glass and then determine how much sand will run through it in 60 exactly timed seconds. G. and R. have been making the hourglasses over four years now and selling them steadily to people who want a timepiece like those that sailed with Columbus, that marked the hours with the sands of ancient Egypt. The hourglass was the seagoing timepiece from the earliest days—other primitive clocks were no good. A marked candle would blow out, a water clock would stop, a sundial was useless under cloudy skies. The galley slave’s turn at the oars was marked by the turn of the glass.

If you want an hourglass for a Father Time masquerade, the price runs from $36 to $300. The scythe will cost you a great deal less at Sears. •